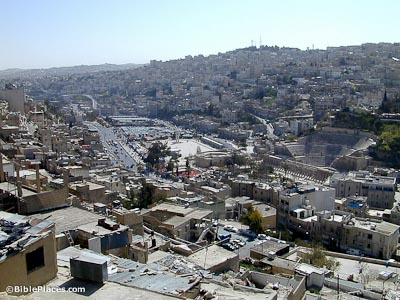 Under Ptolemy II Philadelphos (285–247 BC), Amman was rebuilt and renamed Philadelphia. In 63 BC, Philadelphia became part of the Decapolis set up by Pompey. In AD 106, Philadelphia was included in the Roman province of Arabia by the Emperor Trajan. He built a new road from Elath to Damascus which ran through Philadelphia. This created an economic boom for the city and it flourished. Most of the town’s Roman structures were built in the 2nd century AD, including the theater, forum and Hercules temple. 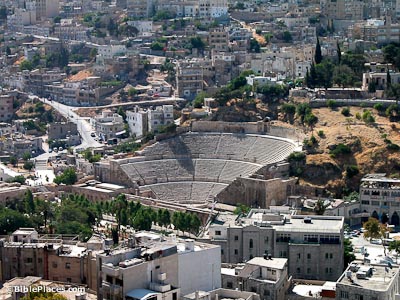 The first theater was built in the Hellenistic period against the hillside, but it was much smaller. The Greeks did not use vaults and arches, so their theaters are always on the hillsides. The Romans rebuilt this theater and the sides are supported by arches. There were 125 Roman theaters worldwide (13 of these are in Jordan, 5 are in Israel). The construction of this theater is dated to the mid-2nd century AD, based on evidence from coins. 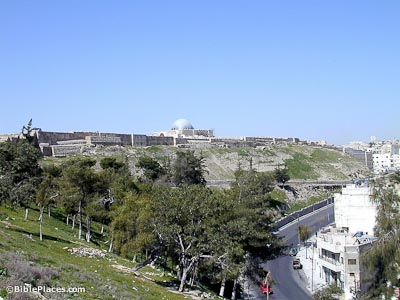 Known today as Jebel al-Qal’a, or the Citadel, the ancient acropolis covers about 40 acres (16 ha) and is L-shaped. The hill is divided into three terraces and was surrounded by deep wadis on all sides but the north. In times of weakness, the Ammonites could find seclusion and protection here. The Jabbok River starts in a strong spring at the citadel of Rabbath Ammon. This spring likely gave the city its name, the “city of waters” (2 Sam 12:27, KJV). 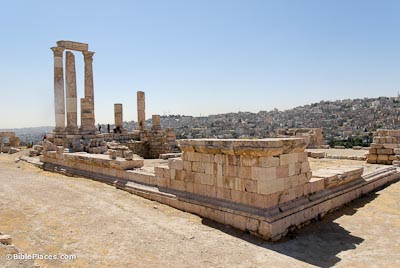 Two temples were apparently built on the Citadel during the 2nd century AD, with no other structures. The Temple of Hercules was built on the southern end during the reign of Marcus Aurelius (AD 161–80). The columns were 33 feet (10 m) tall and were originally part of a six-columned podium. The standing columns were re-erected by the American Center of Oriental Research in Amman.

The acropolis is surrounded by deep wadis (valleys) on three sides. The north side was not as protected and thus was the most vulnerable to attack. It is likely that David’s men concentrated their campaign against the city at this point, and perhaps it was here that Uriah was killed at David’s order (2 Sam 11:16-17).

Amman (The Hashemite Kingdom of Jordan). Sponsored by the Jordanian government, this website provides a history of the city and points of interest for Sponsored Also provides a link to a map of the modern city.

Amman, Jordan (Atlas Tours). Brief summary of the city’s history with a couple of photos.

Amman-Jordan (PBase.com). Features 300 pictures taken in Amman, including some archaeological sites and artifacts.

A Far Country Decapolis (That The World May Know). A substantial article examining the Decapolis in light of Jesus’ ministry.

Rabbah Ammon / Amman Citadel (Dr. William Barrick). Dr. Barrick gives highlights of his trip to Amman, including some archaeological items from the museum.