Also known as Bahr Lut, Eastern Sea, Lake of Asphalt, Salt Sea, “Sea of Sodom and Gomorrah,” Sea of the Arabah, Sea of the Devil, “Sea of the Plain,” Sea of Zoar, Stinking Lake 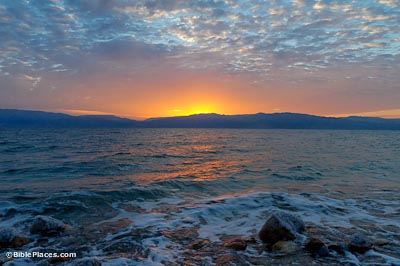 Names of the Sea

Known in the Bible as the “Salt Sea” or the “Sea of the Arabah,” this inland body of water is appropriately named because its high mineral content allows nothing to live in its waters. Other post-biblical names for the Dead Sea include the “Sea of Sodom,” the “Sea of Lot,” the “Sea of Asphalt” and the “Stinking Sea.” In the Crusader period, it was sometimes called the “Devil’s Sea.” All of these names reflect something of the nature of this lake. 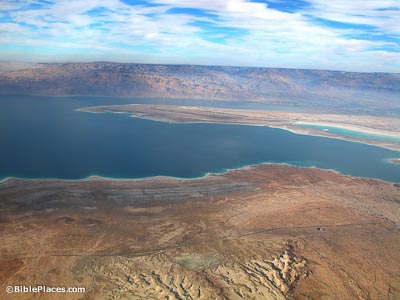 The Dead Sea, unlike the Sea of Galilee to the north, does not figure prominently in the biblical narratives. Its most important role was as a barrier, blocking traffic to Judah from the east. An advancing army of Ammonites and Moabites apparently crossed a shallow part of the Dead Sea on their way to attack King Jehoshaphat (2 Chr 20). Ezekiel has prophesied that one day the Dead Sea will be freshwater and fishermen will spread their nets along the shore.

The Dead Sea is located in the Syro-African Rift, a 4000-mile (6500-km) fault line in the earth’s crust. The lowest point of dry land on earth is the shoreline of the Dead Sea at 1300 feet (400 m) below sea level. That the lake is at the lowest point means that water does not drain from this lake. Daily, 7 million tons (6.4 mil t) of water evaporate but the minerals remain, causing the salt content to increase. Figures for the Dead Sea’s salinity today range from 26–35%. 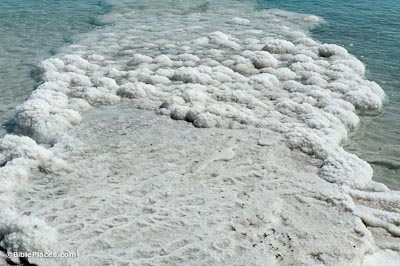 Nearly ten times as salty as the world’s oceans and twice as saline as the Great Salt Lake in Utah, the Dead Sea is rich with minerals. The Dead Sea Works company on the southwest side of the lake employs 1600 people around the clock to harvest the valuable minerals from the water. Potash is the most valuable of those extracted today and is used in the manufacture of fertilizer. The best article on the minerals in the Dead Sea is in the Encyclopedia Britannica. 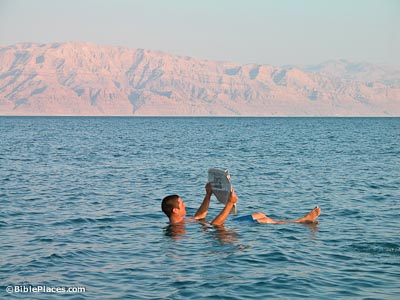 The unique concentration of the Dead Sea waters has long been known to have medicinal value. Aristotle, the Queen of Sheba, King Solomon, and Cleopatra were all familiar with this. Modern doctors still prescribe patients with skin ailments to soak in the waters of the Dead Sea. Because of the dropping level of the Dead Sea, the southern end is no longer under water, except for that which is channeled by aqueducts for the purpose of extracting minerals.

At BiblePlaces.com, see the related sites of En Gedi, Masada, Qumran, Qumran Caves, Jericho, and the Judean Wilderness. For historical images of the Dead Sea, see Life in the Holy Land.

Dead Sea (Dead Sea Tourist Board) The official site for Dead Sea Tourism. Includes all the tourism information one could need, including special sections on “Accommodation,” “Attractions,” “Tracks,” “Restaurants,” etc.

Dead Sea (Encyclopedia Britannica) A great overview of the area, along with some fascinating photos of the water loss at the southern end.

Dead Sea (Catholic Encyclopedia) Highlights the biblical significance of the site while clearly describing the geographical and physical properties of the sea and surrounding area.

Everything You Want to Know About the Dead Sea (DeadSea.com) Question and answer format gives interesting answers to common questions about the Dead Sea’s depth, composition, etc.

Dead Sea Keeps Falling (BBC News) An interesting news story from 2002 reporting on the findings of the European Space Agency in their survey of the region.

Dead Sea Drying: A New Low-Point for Earth (BBC News) This 2016 article discusses the merit of the Dead Sea, and its continually dropping water levels.

Dead Sea (Tourist Israel) A site for tourists with basic information about the area, nearby sites (Masada and En Gedi), tours, hotels, transportation, and more.

For Dead Sea, a Slow and Seemingly Inexorable Death (Washington Post) Fascinating 2005 article on the steady decline of the water level of the Dead Sea, with numerous useful facts.

The Dead Sea: A dramatic look at Israel’s endangered natural wonder (Haaretz) A remarkable photo and video essay describing the dangers of sinkholes and the future of Israel’s shoreline.