The southern tip of modern Israel, ancient Elath (today Eilat) was outside the prescribed boundaries of the Promised Land for the children of Israel. It was one of the stops on the wilderness travels (Deut 2:8). The relationship of Elath to Ezion Geber is unclear; the Bible says that these two places were near each other by the Red Sea but the exact location of these ancient sites is still uncertain. 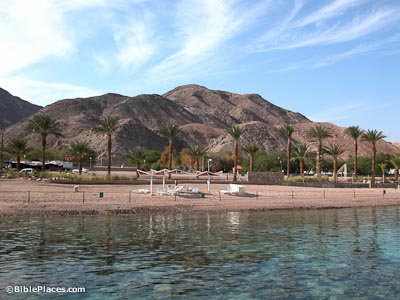 Though beyond “Dan to Beersheba,” this southern port on the Red Sea was the envy of several kings of Judah. Solomon built a fleet of ships here which departed and returned every three years (1 Kgs 9–10). Later Jehoshaphat built a fleet here that was wrecked before it ever set sail (1 Kgs 22). Uzziah was noted for being the one who rebuilt Elath and restored it to Judah (2 Kgs 14:22). 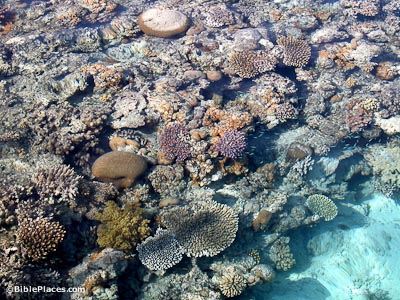 Some of the world’s most beautiful coral reefs are found in the Red Sea from Eilat and south along the Sinai Peninsula. The 7-mile (12-km) wide bay here is shared (half and half) by Israel and Jordan. The Jordanian port city is Aqaba and sometimes the gulf is known by that name. Eilat is one of three Israeli ports (also Haifa and Ashdod) and it serves to bring goods to Israel from the Far East.

Coral is best thought of as “living rock.” The deaths of millions of tiny animals have created this limestone formation over many years. Coral “grows” very slowly and a single accident can destroy hundreds of years of growth. In 1998, a yacht broke away from the buoy it was tied to and crashed on the reef.  It will take the reef at this spot 100 years to recover from the damage inflicted from this accident. 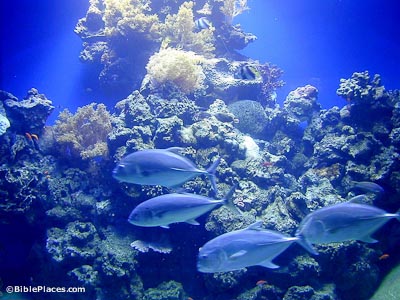 Israel controls about 4 miles (6 km) of shoreline from Eilat to the border crossing to Egypt at Taba. Technically all of Israel’s waters are a nature reserve, but the Coral Beach Reserve is only 2.5 miles (4 km) long and much of this is not open to visitors. The temperature of the Red Sea at Eilat remains between 21–24 degrees C (70–76 F) year-round. Over 100 kinds of coral and 800 species of fish live in these waters.

For other port cities, see Joppa, Sidon, and Tyre.

Eilat – Israel on the Red Sea (Wayne Stiles). An article that discusses both the area’s biblical history and its appeal to tourists.

Elath (WebBible Encyclopedia, ChristianAnswers.Net). Briefly describes the origin of the word, in addition to the basic biblical facts about the site.

Eilat (Virtual Israel Experience). Harmonizes the spirit of this tourist spot with a glimpse into the surrounding area and the history of the region. Links to articles within the Jewish Virtual Library allow for further investigation.

Eilat (The Israeli Mosaic). Contains informative sections on history, the Coral Reef, other attractions in Eilat, and getting there. Links throughout the broad history section allow for in-depth study.

The Eilat Region (Israel Ministry of Foreign Affairs). This page surveys some of the archaeological sites surrounding Elath.

Eilat Guide (eilat-guide.com). This well-designed tourist guide offers a wealth of information, including a page identifying the fish, the history of Eilat, maps and general tourist information.

Welcome to Eilat (eilat.com). Welcomes tourists with a flood of information, from real estate to tours.

IBRCE – Eilat Birdwatching Center (BirdLife Israel). Eilat is home to more than marine wildlife! This page offers a description of Eilat’s seasonal birds, and it links to articles written by various birders, which include photos.