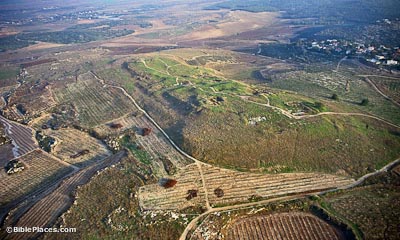 Situated near the International Coastal Highway and guarding the primary route into the Israelite hill country, Gezer was one of the most strategic cities in the Canaanite and Israelite periods. Gezer is a prominent 33-acre (13-ha) site that overlooked the Aijalon Valley and the road leading through it to Jerusalem. The tell was identified as biblical Gezer in 1871 by C. Clermont-Ganneau who, two years later, found the first of many boundary stones inscribed with the city’s name. 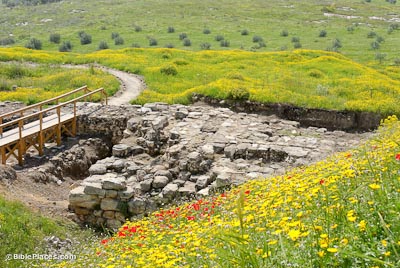 Gezer was one of the most important Canaanite cities in the Middle Bronze period (2000–1500 BC), as attested by the significant archaeological remains. The city was protected by a large wall which included a massive tower. Fifty-two feet (16-m) in width, this tower is the largest structure in any defensive system in this period. 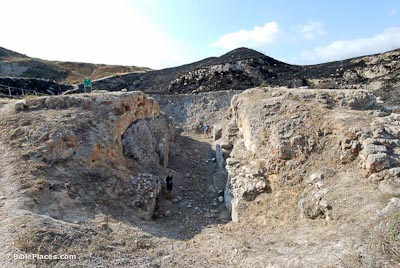 Built with a stone foundation and a mudbrick superstructure, this city gate was constructed about 1650 BC, and is of the typical style of the period. This gate was connected to a 13-foot-wide (4-m-wide) city wall which likely had 25 or more rectangular towers. The Middle Bronze city was probably destroyed by Thutmose III in his invasion, circa 1477 BC. 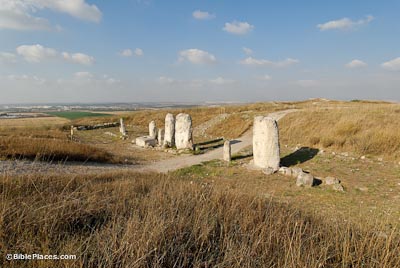 A series of ten standing stones were uncovered in early excavations of the site (they were found laying down and re-erected by archaeologists). Poor excavation makes these difficult to date, but most archaeologists believe they are from about 1500 BC, in the prime of the Canaanites. Some of the stones are more than 10 feet (3 m) high. The stones may have represented a treaty alliance (cf. Exod 24) or have been a cult center (cf. Lev 26).

Severed from its context by the poor archaeological technique of R. A. S. Macalister, the dating of this water system is difficult to determine. This very deep system reaches down to the water table by a 23-foot (7-m) round shaft and a 150-foot (45-m) sloping tunnel. Originally this system was dated to the Late Bronze Age (1500–1200 BC), but the more recent excavator Dever dates it to Iron Age II (1000–600 BC), based on parallels with systems at Hazor, Megiddo, and Gibeon. Reich sees a parallel with Warren’s Shaft, which he now dates to 1800 BC.

Of Macalister’s work, Moorey says, “The Gezer excavations suffered from the worst practices of the time…There was no control over stratigraphy…the interrelation of objects and debris was ignored.” Macalister himself said, “the exact spot in the mound where any ordinary object chanced to lie is not generally of great importance.” 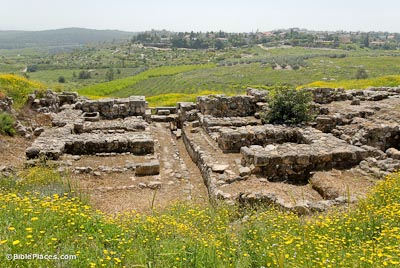 What Macalister identified as a Maccabean castle is actually a beautiful monumental gateway from the time of Solomon, similar to those at Hazor and Megiddo. The date of this gate is confirmed by the presence of a destruction level underneath it (from the unnamed pharaoh who gave the city to Solomon) and a destruction level not long after its construction (by Shishak in 925 BC). Biblical history is dramatically confirmed by these archaeological findings.

Tel Gezer Project (official excavation site) Excavations were completed in 2017, but this website includes much of that interesting history.

Gezer (Jewish Virtual Library) An in-depth article on the history and archaeology of this site.

Gezer Calendar (K. C. Hanson) A description of the Gezer Calendar, including study questions and a lengthy bibliography.

The “High Place” at Tel Gezer (Bible History Daily) This 2015 article looks at the “standing stones” that Macalister interpreted as belonging to a high place at Gezer.

The Water System that Hydrated Tel Gezer (Bible History Daily) A brief article about the water systems of Gezer, including items found nearby.