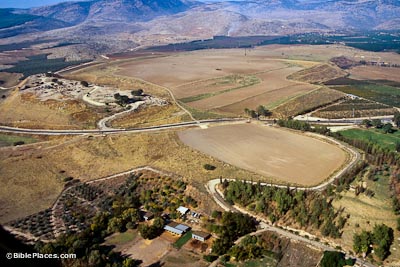 Known in Joshua’s day as “the head of all those kingdoms,” the tell of Hazor is today the largest in Israel at 200 acres (80 ha).

At its height in the Canaanite period, the city encompassed the entire tell. Later when it was inhabited by Israelites, the fortified city included only the Upper City. 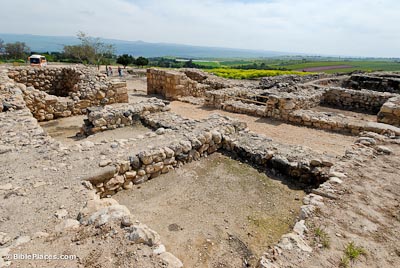 Archaeologists have uncovered a six-chambered gate at Hazor, which is nearly identical in size and design to gates at Megiddo and Gezer.

The best explanation for this is that these gates were all built by the same government. These gates are a remarkable testimony to Solomon’s building activity as described in 1 Kings 9:15. 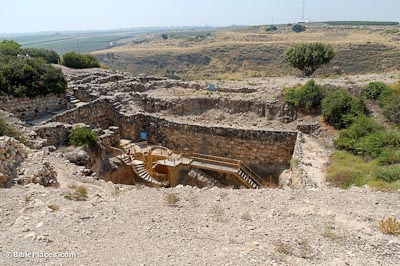 A century after Solomon’s time the Israelites built a massive shaft 130 feet (40 m) deep into the tell, reaching the water table below.

The 62 foot (19 m) vertical shaft was about 50 feet (15 m) square and ended at a wide, sloping stepped tunnel that led another 82 feet (25 m). This system is similar to those at Megiddo and Gibeon. 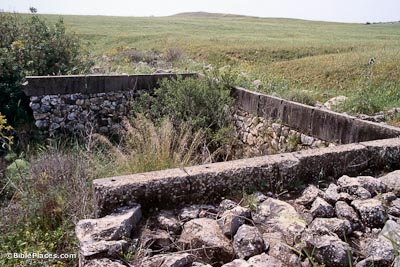 Some of the most impressive remains from Hazor date to the Middle and Late Bronze Ages when the Canaanites lived in the city.

Many structures in the Lower City were cultic structures and included religious figurines or standing stones. Some buildings were lined with basalt orthostats. 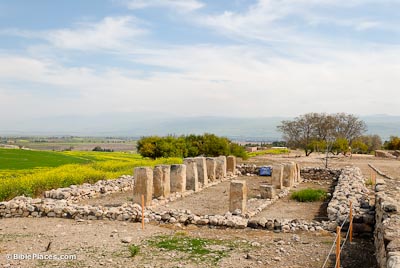 This type of building, better known as an Israelite tripartite pillared building, has been found at numerous sites throughout the country.

Many functions for this type of structure have been suggested. Some archaeologists believe that these were used for the storage of food; more likely, the primary function of this building was for housing the royal cavalry. 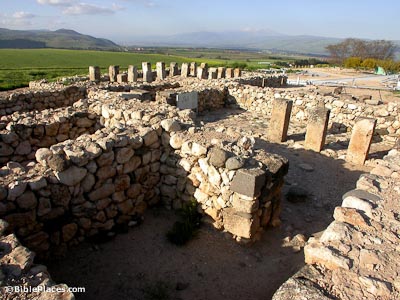 This popular building style would be better known as a “pillared house” than by the number of rooms in it. Found throughout Israel from the time of the settlement of the Israelites, the number of rooms in the dwelling may vary, but always it is characterized by a row or two of pillars separating the central court from the side room.

For a Bible chapter related to Hazor, see Judges 4. See also our page on Mount Hermon for Hazor’s view of the mountain range.

Tel Hazor Excavation Project (Official site for Hazor excavations) Contains information for those interested in joining the dig. History of the site, excavation reports from previous seasons, and pictures are also included.

Archaeology in Israel: Hatzor (Jewish Virtual Library) Highlights Hazor’s history during the periods of the Canaanite city and the Israelite city.

Hazor (BIBARCH) Features many informative links within the text to resources such as: scripture references, other relevant articles within the site, and a “words and phrases glossary.” Also offers a “Scripture Summary.”

Where Are the Royal Archives at Tel Hazor? (Bible History Daily) An article concentrating on the archives and cuneiform tablets of Hazor.

Scorched Wheat May Provide Answers on the Destruction of Canaanite Tel Hazor (Bible History Daily) An article concentrating on the scorched wheat found at Hazor, as it relates to Joshua 11.

Hazor (ChristianAnswers.net) Offers the reader a brief first-hand account of an archaeological dig in Hazor. Features pictures that illustrate and enhance the text.

Tel Hazor Tablets (Crystalinks) Lists many important facts about the site “bullet-style.” Includes a picture of the tablets.

The City Of Hazor And Old Testament Accuracy (ChristianCourier.com) An article demonstrating one example of harmony between archaeology and the text of the Old Testament.

Rare Statue Found at Tel-Hazor (Israel MFA) A 2016 article about the Egyptian statue excavated at the site.