Also known as the Church of the Holy Sepulchre 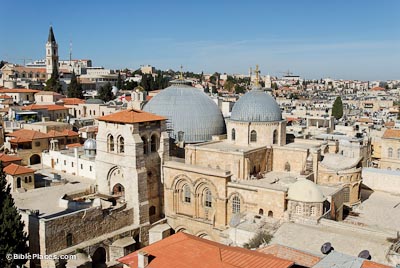 Originally built by the mother of Emperor Constantine in AD 330, the Church of the Holy Sepulcher commemorates the hill of crucifixion and the tomb of Christ’s burial.

On grounds of tradition alone, this church is the best candidate for the location of these events. The Garden Tomb was not identified as the tomb of Jesus until the 19th century. 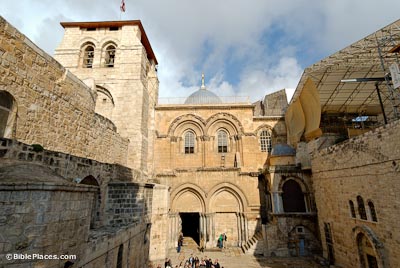 The original Byzantine church was destroyed by the Persians in AD 614. Rebuilt shortly thereafter, the Egyptian caliph al-Hakim destroyed the church in 1009 and had the tomb hacked down to bedrock.

The Crusaders rebuilt the church and much of what is standing today is from that time period. The ladder in the upper right window has been there since at least 1860, a testimony to rivalries between the church’s factions. 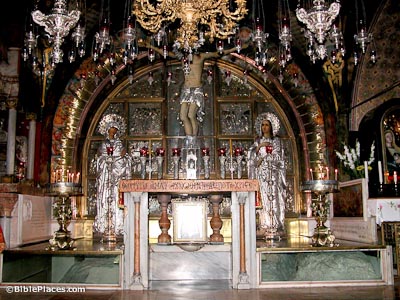 Inside the church is a rocky outcropping which is the traditional place where the cross was placed. Archaeological excavations have demonstrated that this site was outside the city but close to one of its gates and thus would have been a good location for a crucifixion. Today this chapel is controlled by the Greek Orthodox Church. 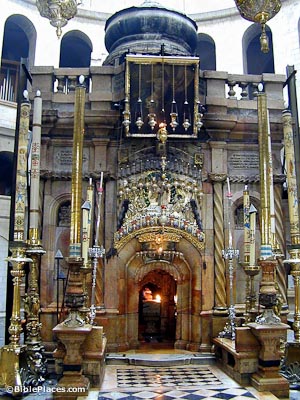 This structure preserves the location of Christ’s tomb. Though the cave here was carved away by a Muslim ruler 1000 years ago, a clear history remains that this has been the revered location of the tomb. Al-Hakim’s efforts to destroy the tomb (and Christianity) in 1009 were not the first.

Earlier the Roman emperor Hadrian erected a large platform of earth over the whole area for the construction of a temple to Venus. Jerome adds to Eusebius’s statement that a statue of Jupiter was on the site for 180 years (AD 140–320). When Constantine converted the empire to Christianity, he had the pagan temples dismantled, the earth removed, and a church built over the spot. 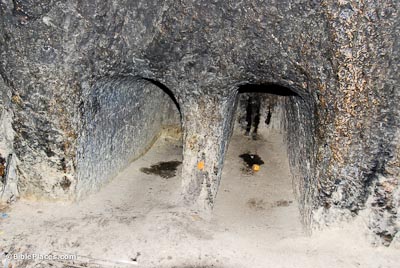 The best piece of evidence that the tomb of Jesus was in this area is the fact that other first-century tombs are still preserved inside the church. Called the “Tomb of Joseph of Arimathea,” these burial shafts (kokhim) are clearly from the time of Christ’s death and thus attest to some kind of burial ground in the area. Combined with the evidence from tradition, this church is most likely the true location of Christ’s death and burial.

See BiblePlaces’s Garden Tomb page for related pictures, text, and links. For historical images of the church, see Life in the Holy Land.

Jerusalem: The Church of the Holy Sepulcher (Israel MFA) Tells the story of the church’s construction and highlights aspects of the now reconstructed basilica that pilgrims visit today. Copy of this page at Jewish Virtual Library, containing an added section: “Politics of the Church.”

The Church of the Holy Sepulchre (PDF article by Tom Powers) For a complete illustrated history of the church, this 43-page article is highly recommended. It was originally published in Artifax.

Church of the Holy Sepulchre (official site) Gives tourism information, along with visitor info and photos.

Church of the Holy Sepulchre (See the Holy Land) A nice basic overview of the church and some of its history and the interior complexities.

Church of the Holy Sepulchre (Encyclopedia Britannica) A nice encyclopedic article about the site.

A Video Tour Inside the Church of the Holy Sepulchre in Jerusalem (YouTube video from Private Tours and Video Tours in Jerusalem) The primary merit of this video is the visuals, rather than the information that is spoken.

Holy Sepulchre (Custodia.org) A brief look at the church, accompanied by a video and pictures.

Immovable Ladder on the Church of the Holy Sepulchre (Atlas Obscura) A tourist’s guide to the history and sighting of the ladder at the church.

Church of the Holy Sepulchre, Jerusalem (Sacred Destinations) Very informative and accurate page with details on the church’s authenticity and history.

Narrative accounts (sections from a book edited by Thomas Wright titled Early Travels in Palestine) These historical accounts of the sites offer unique perspectives for what we see today. One is written by Willibald and found on page 18 (PDF: 61), dating to the 800s. Another is by Saewulf and on pages 36–39 (PDF: 78–81), dating to the 1100s.

Theories with Regard to the Positions of Golgotha and the Tomb (chapter from Charles Wilson’s book titled Golgotha and the Holy Sepulchre) This chapter discusses various locational theories, spending some time concentrating on the Garden Tomb. As a 1906 publication, it provides a dated view that makes several valid points. Pages 103–120 in the original, or pages 132–153 in the PDF. The entire book could provide interesting perspectives for some readers.