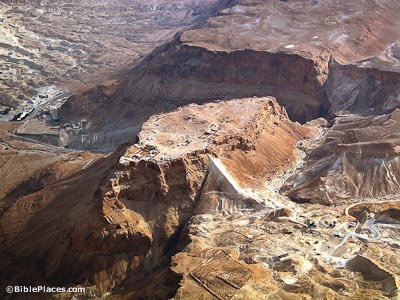 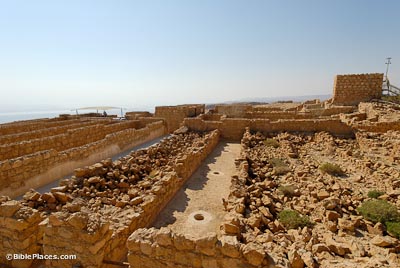 Fifteen long storerooms kept essential provisions for the time of siege. Herod filled with them with food and weapons. Each storeroom held a different commodity, as attested by different storage jars and inscriptions on jars in rooms. One of the most interesting finds was wine bottles, sent to Herod from Italy. 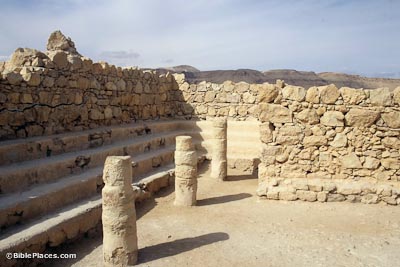 This synagogue was found in the first season of Yadin’s excavations. No Second Temple period synagogues were known at the time. Many coins from the Jewish Revolt were found here, as well as an ostracon (found on the floor) with the inscription, “priestly tithe.” The back room served as a genizah. 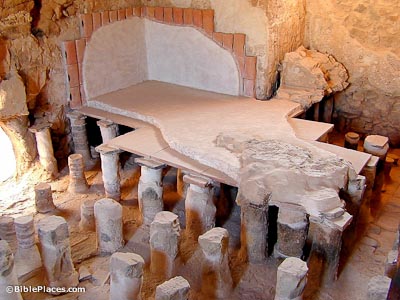 Herod had several private bathhouses built at Masada. The caldarium depicted here had a heavy floor suspended on 200 pillars.

Outside the room, a furnace sent hot air under the floor. When water was placed on the floor, steam was created. Pipes were built into the walls to help to heat the room. 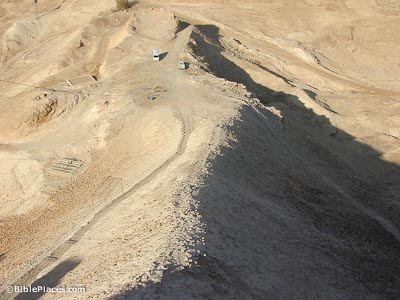 Investigation of tamarisk branches in the Roman siege ramp resulted in the conclusion that fifty percent more rain flowed through the wadis into the Dead Sea when Flavius Silva built the siege ramp.

The ramp was built while siege engines and armed men protected the workers. Ultimately, it allowed the Roman army to access the stronghold. 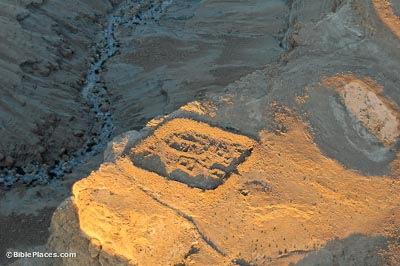 A solid wall was built surrounding Masada and connected the eight Roman camps. It was 6 feet (1.8 m) thick and 7 miles (11 km) long and built to prevent escaping.

An estimated 9,000 soldiers plus support personnel and slaves conducted the siege.

At BiblePlaces.com, see the related sites of the Dead Sea, En Gedi, Qumran, Qumran Caves, Jericho, and the Judean Wilderness.

Masada Desert Fortress (Jewish Virtual Library) Gives a detailed history of the site and descriptions of many of the important archaeological features of the huge fortress.

Masada: Symbol of Jewish Freedom (Israel MFA) Gives greater insight into the meaning behind the last stand at Masada for the Jewish people today.

Masada (The Israeli Mosaic) Contains informative sections on the geographic description, history, archaeology, and getting there. Links throughout allow for in-depth study.

Masada (Into His Own) A brief, encyclopedia-type article with multiple links to related words and topics for further study.

Josephus, War of the Jews: Book VII (uchicago.edu) Read the story of Masada in the words of Josephus. Chapters 8–10 deal specifically with Masada.

Masada, Tragic Fortress in the Sky (Times of Israel) A fairly lengthy article about the site, and an interesting read if you can ignore the over-abundant ads.

Masada (Encyclopaedia of the Orient) This brief article offers a re-telling of the legendary story along with a timeline of historical events.

Masada (SMU, Donald D. Binder) Focuses on the synagogue on top of Masada. It highlights archaeological findings and other interesting facts, including several detailed black-and-white photos with excellent descriptions.

Masada (Zionism and Israel) This article is quite long, and gives the classic history of Masada, along with some arguments against it, even calling it a myth. Offers a unique perspective, compared to much of what is linked here.

From Shrine to Forum: Masada and the Politics of Jewish Extremism (brandeis.edu) For those interested, this 19-page PDF article by Theodore Sasson and Shaul Kelner discusses Masada especially in the context of the Oslo Accords, including “implications for the study of political culture and collective memory.”

Masada essays (Jerusalem Post, listed on PaleoJudaica) Four 2019 articles on Masada, including one by Jodi Magness.