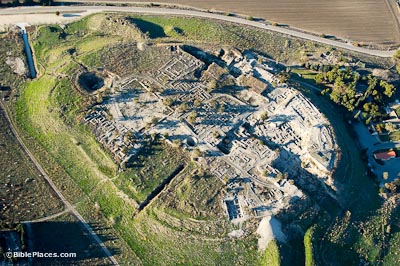 Inhabited from the Chalcolithic period, Megiddo has approximately 26 levels of occupation. American excavators from the Oriental Institute worked from 1925 with the ambitious goal of excavating every level in its entirety. They made it through the first three levels before concentrating the work on certain areas. 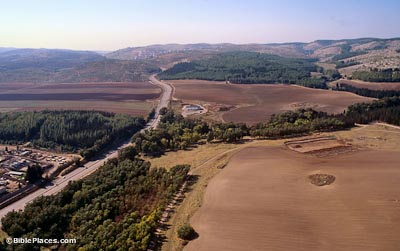 From the earliest times (Early Bronze) to the earliest historical records of the area (Thutmose III) to the future (Revelation 16), Megiddo assumes a prominent role. This is largely owing to its strategic location astride the Megiddo Pass (Wadi Ara) and inside the busy Jezreel Valley. The modern road follows the ancient one; the tel is just off the bottom right corner.

Strongly fortified throughout the ages, Megiddo boasted a stone Syrian-type gate in the days of Canaanite inhabitation.

This gate is later than the bent-axis gate (straightened to accommodate chariots) and earlier than the famous “Solomonic” gate, part of the construction of King Solomon described in 1 Kings 9:15. 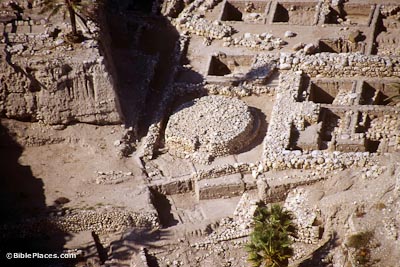 Part of a large religious complex from the third millennium BC, this sacrificial altar is striking in its size (33 ft, 10 m diameter) and location (behind the temple).

A staircase led up to the altar, a small temenos fence surrounded it, and large concentrations of animal bones and ashes were found in the vicinity. 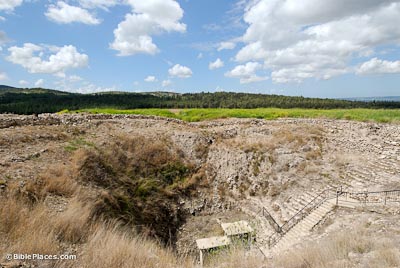 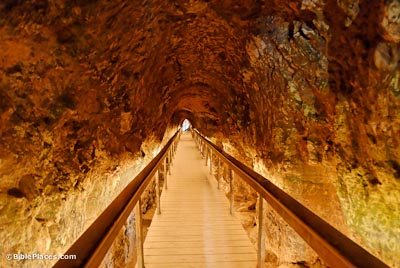 This Iron Age tunnel connected the bottom of Ahab’s shaft to the spring. Before its construction, Megiddo residents had to leave the city walls in order to get water from the spring.

This tunnel was hewn from both ends at the same time (like Hezekiah’s Tunnel) and its builders were only one foot (0.3 m) off when meeting in the middle.

See the related sites of Gezer and Hazor.

The Megiddo Expedition (official page) Offers information on the site and its history as well as previous excavations and features a photo gallery.

Megiddo (Jewish Virtual Library) A nice background article about the site, not identical to the one below.

Megiddo: The Solomonic “Chariot City” (Israel MFA) Gives a detailed history of the site and descriptions of several important archaeological features. Copy of this page at Jewish Virtual Library.

Megiddo (BibArch) Features many informative links within the text to resources including: Scripture references, the site’s bibliography (some sources cited are available on the web), other relevant articles within the site, and a “words and phrases glossary.” Also offers a “Scripture Summary” and an “Archaeological Profile of Megiddo.”

Solomon’s Gate at Megiddo (Dig the Bible) A brief discussion of the Solomonic gate.

Residue Found in 3,600-Year-Old Holy Land Tomb Rewrites the History of Vanilla (Times of Israel) For those interested in both archaeology and food history, this article offers some fascinating information about the early use of vanilla, based on a discovery near Megiddo.