The Pool of Siloam

Archaeologists working in the City of David in 2004 uncovered the edge of the Pool of Siloam from the time of Jesus (cf. John 9). This photo shows the city of Jerusalem with the Temple Mount and the City of David. The excavations are on the west side of the City of David, indicated by the arrows. Letter “A” marks the location of the Byzantine Pool and church, and Letter “B” shows the area of the first-century pool. 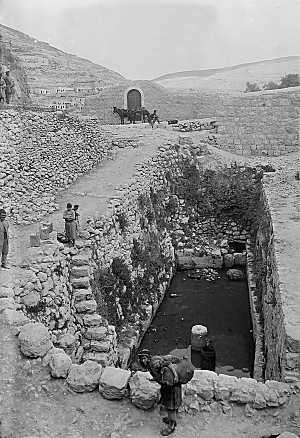 The photograph at right was taken in the early 1900s and shows the Pool of Siloam before later Muslim construction above it. An early description of the pool reads, “‘There is nothing picturesque about it, certainly. The crumbling walls, and fallen columns in and around it, give it an air of neglect.’ It is a parallelogram about 53 feet (16 m) long and 18 feet (5 m) wide. Dr. Thomson says he has seen this pool nearly full, but that now the water merely passes through it. ‘The intermittent flow is supposed to be due to a natural syphon, but the natives’ explanation is that a dragon lives below and swallows the water when he is awake, but that when he sleeps it wells up freely.'” –Major Conder.

Sources: Text: Earthly Footsteps of the Man of Galilee, p. 227.  Photo: Library of Congress, LC-matpc-04245, available with 600 other high-resolution photographs on the Jerusalem CD, volume 2 of The American Colony and Eric Matson Collection.

This is the pool that you enter at the end of the trek through Hezekiah’s Tunnel. There are clear remains around this pool of the Byzantine church built by Empress Eudocia.  This pool has long been visited as the pool of Jesus’s miracle; however, it dates to the Byzantine era, roughly 300 years after the time of Christ. 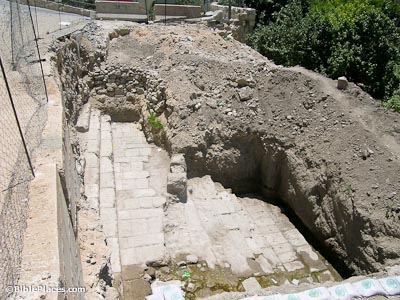 In the summer of 2004, work along a drainage pipe revealed some large stone steps. Archaeologists Eli Shukron and Ronny Reich quickly uncovered a series of steps leading down into the adjacent garden.

After some months of work, a large section of these steps were revealed, but work was hindered on one side by the drainage channel (visible as the concrete section on the left side of the photo) and on the other by property owned by the Greek Orthodox Church. At the far end, the corner of the steps is visible, but at this point, no other corners had been revealed.

Excavations continued, and two corners have now been revealed. One side of the pool has been fully excavated thus far. Archaeologists removed a single-lane paved road in order to conduct the excavations, but the Greek Orthodox Church has forbidden any excavation of their property in the garden to the west. Excavations have uncovered three sets of five stairs each leading down into the pool along its entire 160-foot (50-m) length. This photo looks to the southeastern corner. 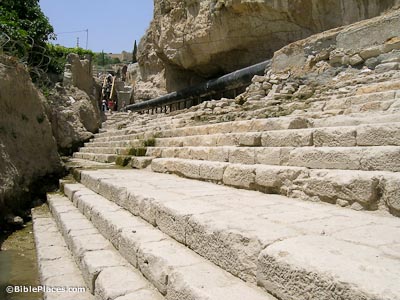 The Pool in the Time of Jesus

Pottery indicates that this pool was in use in the first century. The blind man washed the mud off of his eyes in this pool and received his sight (see John 9). Note the northeastern corner of the steps is exposed at the far end of the photo, where the people are standing.

Where Does It Go?

This view is from across the valley (looking east) and shows the steps that have been excavated (as above).  It also gives a perspective of how the rest of the pool is buried underneath the garden. The Greek Orthodox Church has continued to forbid excavations on their property, depriving Christians worldwide of the opportunity to see the full pool made famous by Jesus’s miracle.

The Size of the Pool

The discovery of the northeastern and southeastern corners indicates not only the length of the pool on one side but reveals the presence of steps on the pool’s northern and southern sides. The angles of the corners are slightly larger than 90 degrees, suggesting that the pool was a trapezoid in shape. Each set of steps was separated by a landing which may have served people entering the pool. The length of the pool is estimated to be as much as 225 feet (70 m), and Jerome Murphy-O’Connor puts the size at 190 x 160 feet (60 x 50 m).

The Two Pools of Siloam

This drawing, created by Father Vincent in the early 1900s, shows the relationship of the two pools (west is at the top). The pool marked with a yellow arrow is the modern pool at the end of Hezekiah’s Tunnel. It is narrow and shallow. The new excavations are in the area labeled as “Birket el-Hamra,” marked with the red arrow. Scholars had long believed that this was the area of an ancient pool, but until these excavations, they did not understand its date, size, or other important details. Excavations allow us to identify this pool as the one of the Bible.

Pool of Siloam (See the Holy Land) An excellent introduction to the Siloam Pool, accompanied by some information on Hezekiah’s Tunnel.

Siloam, Pool of (WebBible Encyclopedia) Upfront article on the pool that covers the main facts as known before the current excavations.

Pool of Siloam (Wikipedia) Brief article that gives the well-known facts and New Testament connection. Highlight here is a hand-colored image from 1865.

Archaeologists Identify Traces of ‘Miracle’ Pool (NBC) News article from 2004 about the discovery of the Pool of Siloam, including an artist’s reconstruction of what the (newly-discovered) pool liked like in the time of Jesus.

Biblical Pool of Siloam Uncovered in Jerusalem (LA Times) Primary article from the August 2005 press conference which was duplicated throughout the press.

The Siloam Pool: Where Jesus Healed the Blind Man (Bible History Daily) This 2009 article gives a picture and an artist’s reconstruction of the pool, a few years after the discovery. It also includes a brief discussion of how the pool was used in the time of Christ.

Where is the Original Siloam Pool from the Bible? (Bible History Daily) Excerpted from a 2017 article in BAR by Hershel Shanks, this article discusses some of the questions that still surround the Siloam Pool.