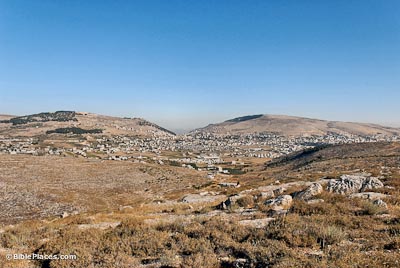 Located between Mt. Gerizim (left) and Mt. Ebal (right), Shechem is preeminent in the biblical record, beginning with God’s promise of the land to Abraham.

Later Jacob would return here with his family and settle shortly. During the Conquest, the twelve tribes gathered on these two hills to recite God’s Law and the blessings and curses that accompanied obedience and disobedience. 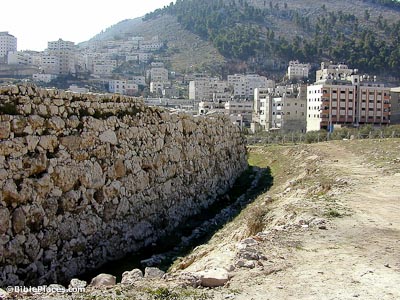 Vulnerable by location, Shechem was strongly fortified from its earliest history. This wall was built of Cyclopean stones and continued in use through the Late Bronze Age without significant changes.

In the background, Mount Gerizim was the location of the Samaritan temple in the 4th–2nd centuries BC. 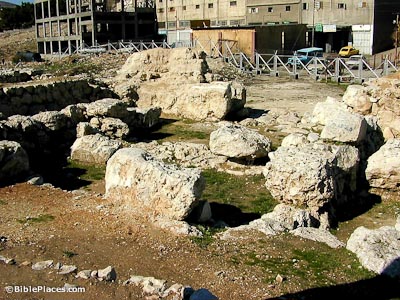 Part of the city’s fortifications throughout the second millennium, this gate is typical for the Middle Bronze period with three piers and two chambers. Only the stone foundations remain.

This gate most likely was in use in the time of Jacob and certainly was the main gate of the city in the days of Abimelech (Judg 9). 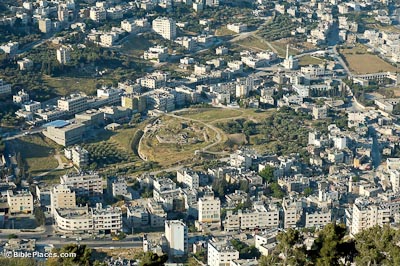 1. Abraham promised the land.
2. Jacob buys a plot of land; Dinah is raped.
3. Jacob’s sons are tending the sheep here before Joseph finds them in Dothan.
4. The covenant is confirmed during the Conquest.
5. The city is set aside as a levitical city and a city of refuge.
6. Joseph is buried here.
7. The ten tribes reject Rehoboam. 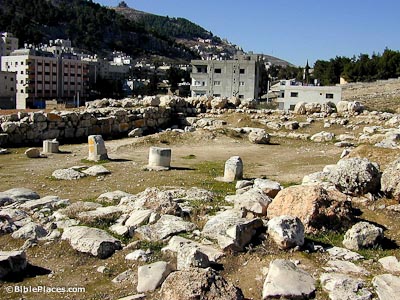 This fortified temple dates to the MB and LB periods and has walls 17 feet (5 m) thick. The excavators identified this building with the Temple of Baal Berith mentioned in Judges 9. From this building, funds were taken to finance Abimelech’s kingship and here the citizens of the city took refuge against Abimelech’s attack.

For another Bible chapter related to Shechem, see Joshua 24.

Shechem: Its Archaeological and Contextual Significance (Bible Archaeology) A nice discussion of the archaeology around Shechem, from the Spring 2005 issue of Bible and Spade, written by David G. Hansen.

The Geographical, Historical, & Spiritual Significance of Shechem (Biblical Studies Foundation) An excellent article by Wayne Stiles, finding its foundations in the introductory statement, “geography affects history.” Examines geography in order to better understand the historical and spiritual significance of Shechem.

Shechem Still Shouts for Us to Choose God Today (Wayne Stiles personal blog) This article by Wayne Stiles particularly concentrates on the New Testament importance of Shechem, and what importance that brings to us today.

Shechem (Jewish Encyclopedia) A nice article covering both biblical and other historical references to Shechem and that area.

Shechem in the Light of Archaeological Evidence (PDF article) This 1969 article gives a dated perspective on Shechem and its archaeology. Written by Siegfried H. Horn.

Shechem (Nablus): Joseph’s Tomb (Chabad) A distinctly Jewish perspective on the site, including its Old Testament and modern history. Features several older views of the tomb.

Shechem (Bible History) Highlights biblical events that occurred in the region and features a map.

Shechem (Into His Own)  A brief, encyclopedia-type article with multiple links to related words and topics for further study.

Sichem (Shechem) (The Catholic Encyclopedia) Paints a vivid picture of life in this region in biblical times. Text only, no photographs.

The Significance of Shechem (Israel My Glory) Another discussion of Shechem and its relevance, relating only to the Old Testament history.


Jacob’s Well (See the Holy Land) Discusses modern tensions at the site, along with biblical connections.

Mount Ebal (Bible Hub) Includes a map and a list of biblical mentions of Mount Ebal, along with geographical information.

Joshua Builds an Altar at Mt. Ebal (The Bible Journey) A brief article covering the biblical connections of Mount Ebal, relating to Mount Gerizim and Shechem too.

The Cult Site on Mount Ebal (Haifa University, by Adam Zertal) An extensive look at the results of the excavations of a “mysterious structure,” the alleged altar found at Mount Ebal.

A Biblical Altar on Mt. Ebal and Other Israelite Footprints in the Jordan Valley? (Bible History Daily) This 2018 article discusses archaeological finds on Mt. Ebal at some length.

Mount Gerizim (Jewish Virtual Library) This website covers the history of Mt. Gerizim in some detail, including a bibliography and a brief look at modern archaeology.

Samaritan Passover (BiblePlaces.com) Photos and information about the annual sacrifice on Mount Gerizim.

The Temple on Mount Gerizim – In the Bible and Archaeology (Bible History Daily) This 2019 article gleans details about ancient worship from an archaeological study of the temple found at this site.

Dating of the Samaritan Temple on Mt. Gerizim (Bible History Daily) This 2012 article from Yitzhak Magen gives his reasoning for the date he gives to the temple. Additional resources are also mentioned.