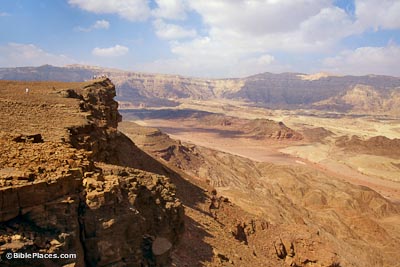 The Timna Valley is located 15 miles (25 km) north of Eilat (Elath). It is not mentioned in the Bible but was used for copper mining during the biblical period. (The Timnah in Judges 14 is located further north.) The valley of Timna is 35 square miles (90 sq km) with high mountains (1600-2300 ft; 500-700 m) on all sides except in the east. Mount Timna in the center rises 1486 feet (453 m) above the surrounding valley. The valley is drained by four wadis. 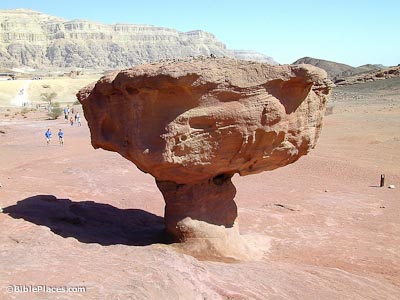 This unique geological formation was once part of the adjacent mountain. It was formed by erosion caused by winds and rainstorms.  The layers of rock in the area consist predominately of sandstone but also contains dolomite, lime, and marl. Copper was mined in this valley as early as the Chalcolithic period (c. 3500 B.C.), making them the oldest known copper mines in the world. 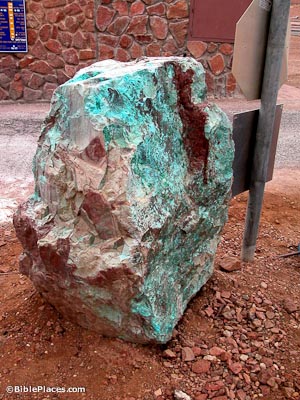 An early explorer in this region, Nelson Glueck, believed that Solomon mined at Timna. Archaeological investigation after Glueck concluded that there was no mining activity during Solomon’s time. But the latest research concludes that the peak of production was during Solomon’s rule, perhaps by his Edomite subjects. Copper was mined here during the Chalcolithic, Early Bronze, Late Bronze-Iron II, and Roman periods. The copper ingots produced here were transported elsewhere to be made into tools. Copper was a very important metal in the ancient world because of its use in bronze. Over 10,000 mining shafts have been found in the Timna Valley. An Israeli company, Timna Copper Mines, Ltd., mined in this area until the price of copper decreased in the 1970s. References in the Bible to copper metal and mining include Deuteronomy 8:9, Job 28:2, Ezekiel 22:20, and Luke 21:2. 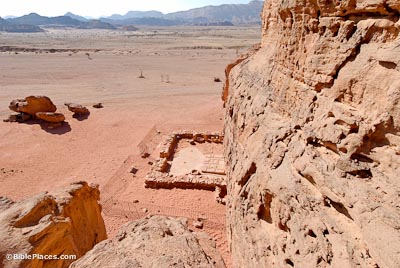 Egyptian miners in the 13th century built a temple to the goddess Hathor against the face of Solomon’s Pillars. The excavators found hundreds of Egyptian objects including seals, jewelry, and art objects. The temple was rectangular, may have been covered with a fabric material, and had a niche for a deity figurine. Hathor was the Egyptian goddess of love, and served as the patron god of miners. Depictions of Hathor were found in the temple art and architecture. 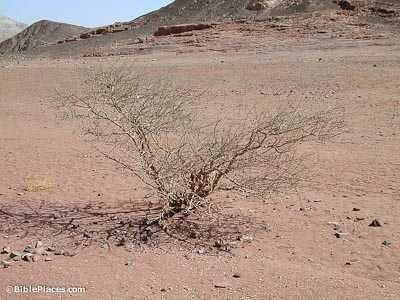 What kind of bushes grow in the wilderness that might have been on fire without being consumed? One can imagine a bush like this being the “burning bush.” Exodus 3:2 (KJV) “And the angel of the LORD appeared unto him in a flame of fire out of the midst of a bush: and he looked, and, behold, the bush burned with fire, and the bush was not consumed.”

Solomon’s Pillars are natural geological formations that were formed when the rock cracked and water eroded them to separate the rock into distinct “pillars.” An inscription nearby depicts the Egyptian pharaoh Ramses III offering gifts to the goddess Hathor.

Timna: Valley of the Ancient Copper Mines (Jewish Virtual Library). An excellent overview of the history and importance of Timna Valley, with particular emphasis on copper mining and production and the temple of Hathor.

Timna (Jewish National Fund). A summary of the historical events and the development of the tourist center which includes a few photos.

Timna Archaeological Map (Bible Origins). A map of the Timna Valley marking archaeological sites. Unfortunately the purpose of the site is to promote a rationalist-humanist interpretation of the Bible.

Solomon’s Pillars (Timna) (Personal Webpage). A variety of medium-resolution photographs of the interesting geological feature.  This site is the work of Alexander Sakharov.

King Solomon’s Mines, After All (BiblePlaces Blog). A summary of recent research that concludes that the peak of the copper mining at Timna was during the reign of Solomon.