Excavations have resumed at the Tel Motza (Moza) temple on the outskirts of Jerusalem.

“A pool of water near the Dead Sea was recently found to have turned red.”

The Jerusalem Post surveys archaeological work and discoveries made during a year of Covid.

Newsweek’s list of 20 largest museums in the world includes the Israel Museum in spot #17.

Al Qarara Cultural Museum is the first private museum in the Gaza Strip.

On the Rejuvenation podcast, Shay Bar discusses his archaeological studies in tribal territory of Manasseh and the Jordan Valley.

ASOR webinar on October 7: “Digging the Divine?: Judahite Pillar Figurines and the Archaeology of Israelite Religion,” by Erin Denby 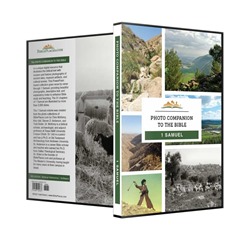 Weekend Sale: Photo Companion to the Bible: 1 Samuel – only $49 with coupon SAMUEL.

Regarding the recent story about the ancient Jerusalem weight which was falsely labeled to facilitate cheating, some scholars have observed that it was actually labeled correctly as an 8-gerah weight.

A secret tunnel under the slope of Mount Zion that was used by Israelis after Jordan captured the Old City in 1948 has now been opened to the public.

Israel has an “ark museum” of sorts, and Israel’s Good Name describes his visit to the Steinhardt Museum of Natural History in Tel Aviv in a well-illustrated blog post.

Dozens of installations used for the large-scale production of salt have been identified along the northern coasts of Israel.

The Ketef Hinnom silver amulets are the subject of an article in the most recent issue of Ink magazine, published by Tyndale House (pages 12-14).

Egypt is preparing to open the world’s largest open-air museum in Luxor.

“Using a leaf uncovered from the archaeological site of an ancient Egyptian temple, researchers . . . have successfully determined the ancient hybrid origin of some date palms.” The underlying journal article is here.

The National Museum of Beirut has reopened after a $175,000 restoration.

Excavations in eastern Turkey have revealed an unusual tomb belonging to an Urartian ruler who was buried with his dog, horses, cattle, and sheep.

“Out of the ashes of Pompeii, archaeologists recently pulled up a time capsule, though only the bronze hinges remained of what is being described as a ‘sorceress’ toolkit.’”

On December 6 and 13, John J. Collins will be giving a virtual lecture on “The Dead Sea Scrolls: The Light They Shed on Judaism and Christianity.” Registration is required and free.

This Week in the Ancient Near East wraps up the summer with a round-up episode.

The indoor model of 1st-century Jerusalem that was located at the Holy Land Experience in Orlando will be part of a new exhibit at the Ark Encounter. There’s a nice photo of the model here. And some others here.

So Many Tombs at Hierapolis

I’ve recently recommended Christopher Stanley’s A Rooster for Asklepios as an enjoyable way to enter the Greco-Roman world and all of its fascinating background to the New Testament. Frequently I found things clicking into place as he included some ancient custom or activity in the fictional story of a slave who journeys with his master to a healing sanctuary of Asklepios.

Early in the story, a young doctor is describing his previous employment at the temple of Asklepios in Hierapolis.

The Jerusalem Seminary has announced their Inauguration of the School of the Bible on Wednesday (8 pm in Jerusalem, and livestream) featuring Gerald McDermott, Jeffrey Seif, and Baruch Brian Kvasnica.

They have also announced a great slate of classes for the fall semester. The school is located in the center of Jerusalem, but all of the courses this semester are being held online.

I previously recommended JS when it launched a pilot semester, and their Matthew and Hebrew courses received rave reviews (see the bottom of each page). I know a number of the professors related to Jerusalem Seminary, and they are seasoned scholars who have lived for many years (or all their lives) in Israel.

You can jump over to the course catalog for all the details, but I’ve copied a summary below. I will note two items in particular: (1) there is an audit option at a reduced price; and (2) if you’ve ever wanted to learn some Hebrew, this beginner’s course will be exceptional.

Israel Matters: A Theology of People and Land – A history of theology concerning Israel and her Biblical significance taught by one of the world’s leading theologians, Dr. Gerald McDermott. 3 credits, 450 dollars ($350 audit).

The Gospel of Matthew in its First Century Context – Learn about Jesus and His Jewish world through Matthew’s eyes from Matthean expert, Dr. Noel Rabinowitz. 3 credits, 450 dollars ($350 audit).

“An ancient stone weight dug up in Jerusalem has been found to be far heavier than the amount written on its surface, leading archaeologists to assume it was used to cheat in trading.” The discovery was presented at a conference in Jerusalem on Thursday (video in Hebrew here).

A report has recently been published on the overt and covert involvement of Israelis in archaeological research in the West Bank between 1948 and 1967.

Work has begun to renovate the bridge leading from the Western Wall plaza to the Temple Mount.

A new app allows visitors to explore the archaeological remains of the Church of the Glorious Martyr recently excavated near Beth Shemesh. The latest issue of BAR has more information about the church, and Owen Jarus provides a summary.

Archaeologists announced the discovery of a settlement in Alexandria dating back to the 2nd century BC, including a sculpture of Alexander the Great.

“One of the most important religious centers of the ancient world, the city of Akhmim in southern Egypt is presented in the exhibit Akhmim: Egypt’s Forgotten City, currently on display in the James Simon Gallery of the Berlin State Museums.”

The “wine of Lebanon” mentioned by the prophet Hosea was famous in antiquity. An article in The Ancient Near East Today describes some new archaeological evidence for the production of Phoenician wine.

The skull of a woman who underwent the world’s first brain surgery will be reconstructed using a beeswax technique.

Norwegian authorities “confiscated approximately 100 antiquities from the extensive collection of Martin Schøyen which Iraqi authorities believe were illicitly removed from their country.”

On Sept. 19, Yosef Garfinkel will be speaking in the next Friends of ASOR webinar on the topic of “David, Solomon, and Rehoboam’s Kingdom—The Archaeological Evidence.”

On Dec 1, Andrea Berlin will be speaking in the BAS Scholars Series on “The Rise of the Maccabees:What Archaeology Reveals About Antiquity’s Last Independent Jewish Kingdom.”

This week’s program on The Book and the Spade: Ashkelon basilica, Sussita theater, missing walls, with Clyde Billington.

Lois Tverberg takes a Hebraic look at the gospel and its surprising bearers.

“For the Jewish New Year, Joan Nathan composes a dish that pays tribute to foods that the biblical Canaanites might have eaten.”

The Iron Age gate at Megiddo often associated with Solomon has been reconstructed. This is particularly helpful because the Chicago expedition in the 1930s had completely removed one side of the gatehouse, making it difficult for visitors to visualize.

The following photos are provided courtesy of the Jezreel Valley Regional Project. A recent article on this gate and its predecessors and successors was published in 2019 by the Tel Aviv journal: “The Iron Age Gates of Megiddo: New Evidence and Updated Interpretations,” by Israel Finkelstein, Matthew J. Adams, Erin Hall, and Eythan Levy. 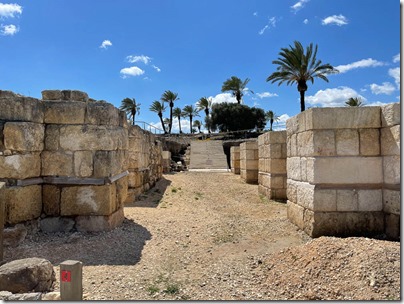 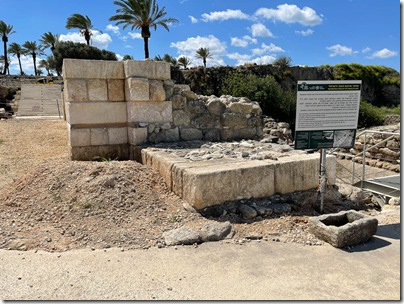 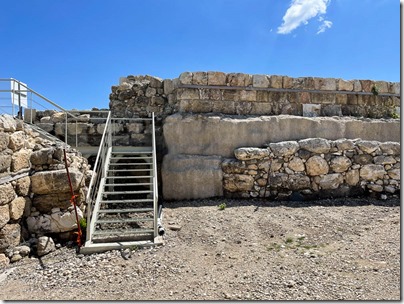 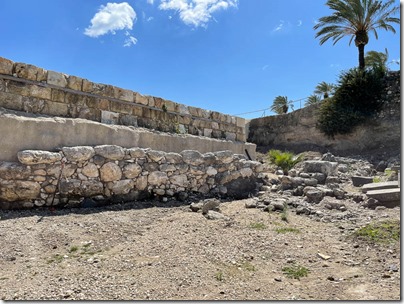 The sign in front of the gate reads as follows:

Reconstruction of the Israelite Gate.

The Israel Nature and Parks Authority and the Israel Antiquities Authority have begun reconstruction of the gate from the time of the kings of Israel.

During the 1930s the western part of the gate was removed by the University of Chicago expedition in order to excavate beneath it.

We are currently reconstructing the gate and restoring it to its previous condition. After reconstruction is complete visitors will pass through the ancient gate on their way to tour the site.

The work is expected to take eight months.

We apologize for the temporary inconvenience and ask that you walk carefully on the authorized path.