The Acoustics of Mounts Gerizim and Ebal

In 1879, J. W. McGarvey made a tour of the Holy Land.  His visit to the area of Nablus (biblical Shechem) is particularly interesting because of his acoustical test.  Today tourists are not able to visit this area, and if they were, the urbanization of the area has made a similar experience impossible today.  This section is from Lands of the Bible, originally published in 1880, pages 506-8 (emphasis added). A limited preview is available at Google Books (some copies for sale here).  Thanks to Paul Mitchell for discovering this nugget and sending it on.

“On reaching Shechem we called on Brother El Karey, the only Baptist missionary in Palestine. I had a letter of introduction to him, given me by a Baptist preacher from London whom I met at Naples.

He received us very cordially, explained to us his missionary labors, and, being a native of the place, though educated in England, he was full of the local information for which we were in search. We especially wanted to learn the best way to reach Aenon, the locality of which was definitely fixed by Lieutenant Conder, but which our dragoman had never visited. He gave us the desired information, and the next morning, leaving our tents pitched at Shechem, we made an excursion to that interesting spot. 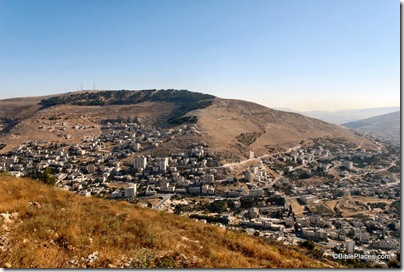 Our route took us back through the valley, and we resolved that while passing between the two mountains of Ebal and Gerizim, in the still morning air, we would try the experiment of reading the blessings and curses. It will be remembered by the reader that, in compliance with directions given before the death of Moses, Joshua assembled all the people on these two mountains, stationing six tribes on one, and six opposite to them on the other, and he stood between and read to them all the blessings and curses of the law (See Deut 27-28, Josh 8:30-35). It has been urged by some skeptics that it was impossible for Joshua to read so as to be heard by the whole multitude of Israel. It is a sufficient answer to this to show that while Joshua read, the Levites were directed to repeat the words “with a loud voice” (Deut 27:14), and that it was an easy matter to station them at such points that their repetitions, like those of officers along the line of a marching army, could carry the words to the utmost limits of the multitude. But it is interesting to know that the spot chosen by God for this reading is a vast natural amphitheatre, in which the human voice can be heard to a surprising distance. About half-way between Shechem and the mouth of the valley in which it stands there is a deep, semicircular recess in the face of Mount Ebal, and a corresponding one precisely opposite to it in Mount Gerizim. No man with his eyes open can ride along the valley without being struck with this singular formation. As soon as I saw it I recognized it as the place of Joshua’s reading. It has been asserted repeatedly by travelers that, although two men stationed on the opposite slopes of these two mountains are a mile apart, they can read so as to be heard by each other. We preferred to try the experiment in stricter accordance with Joshua’s example; so I took a position, Bible in hand, in the middle of the valley, while Brother Taylor and Frank, to represent six tribes, climbed halfway up the slope of Mount Gerizim; and Brother Earl, to represent the other six tribes, took a similar position on Mount Ebal. I read, and they were to pronounce the amen after each curse or blessing. Brother Taylor heard me distinctly, and I could hear his response. But Brother Earl, though he could hear my voice, could not distinguish the words. This was owing to the fact that some terrace-walls on the side of the mountain prevented him from ascending high enough, and the trees between me and him interrupted the passage of the sound. The experiment makes it perfectly obvious that if Joshua had a strong voice,–which I have not,–he could have been heard by his audience without the assistance of the Levites. As to the space included in the two amphitheatres, I think it ample to accommodate the six hundred thousand men with their families, though of this I cannot be certain. If more space was required, the aid of the Levites was indispensable.”

3 thoughts on “The Acoustics of Mounts Gerizim and Ebal”