Picture of the Week: Churning Butter

Proverbs 30:33 contains a interesting analogy that is not familiar to most of us who live in advanced cultures:

For the churning of milk produces butter,
and twisting a nose draws blood,
and stirring up anger produces strife.
(Prov. 30:33, HCSB)

The second and third lines are familiar enough in any culture: grab and twist someone’s nose and naturally blood will come pouring out, or stir up someone’s anger (or as we say in America, “press someone’s buttons”) and you will have a fight on your hands. However, the first line describes something that would have been familiar to most people throughout history, but unfortunately is not familiar to citizens in first world countries today. In this instance, we get the short end of the stick.

How do you make butter? Well naturally, the answer is … you don’t! You just go to the store and buy it! And that is where our problem lies. We’ve become so advanced that we have lost touch with some of these biblical analogies. Fortunately, we have resources that can help, such as the Historic Views of the Holy Land collections available at LifeintheHolyLand.com.  Below is a photograph from The American Colony and Eric Matson Collection that was taken sometime between 1898 and 1946. It shows two Bedouins churning butter (click on the image to enlarge): 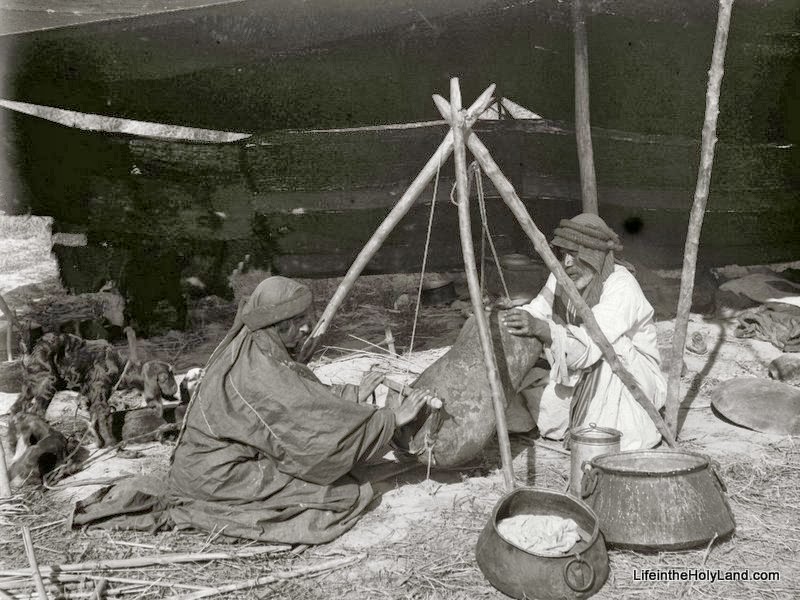 In his book Daily Life in Biblical Times, Oded Borowski explains the process and the reason behind it:

Fresh milk cannot be stored for long without refrigeration, especially in the warm climate of the Near East.  Therefore, to preserve it, milk has to be processed. … Processing milk starts by churning, which separates the fat from the whey. This is done by using a container made of goatskin or clay. The vessel, still used in some present-day societies, is hung in a way that allows it to swing back and forth, a motion that separates the fat and permits the making of various products. Highly nutritious dairy products made and consumed by the Israelites were butter, cheese, and yogurt. (Borowski, Daily Life in Biblical Times, p. 66.)

So the two people in the photograph above have placed milk (probably goat-milk) inside a goatskin container, and are making butter by rocking the container back and forth. Now we can go back to our proverb with some additional insight:

Like many good proverbs, the saying goes from concrete examples which illustrate a truth to an abstract concept that parallels that truth. Churning milk, wringing someone’s nose, and stirring up anger are all actions that are done intentionally. You don’t accidentally make butter. As you can see in the photo, you have to work at it. And you wouldn’t accidentally grab someone’s nose and give it a firm twist. So it seems that this proverb is referring to intentionally doing things that you know will make someone angry. You can accidentally stir up someone’s anger, but this proverb is referring to intentionally working at it.

In addition, all three of those actions produce an expected result every time you do them. Each time you churn milk, you will get a separation of the fatty parts of the milk from the watery parts (the whey). It is a scientific fact. It is the same with twisting someone’s nose: every time it will cause them to bleed. So the wisdom shared in this proverb is that the natural consequence of stirring up someone’s anger is a quarrel. If you intentionally get someone angry with you, then you will have a fight on your hands.

So the lesson here is not to stir up someone’s anger in the first place. If you don’t want the fight, don’t cause the anger.

But secondarily we learn that if our local grocery store happens to run out of butter, we can make our own with three sticks, some rope, a goatskin, some goat-milk, and little bit of effort … but let’s hope things don’t come to that.

This photograph and over 600 others are available in Volume 6 of The American Colony and Eric Matson Collection and can be purchased here for $20 (with free shipping). The excerpt was taken from Oded Borowski, Daily Life in Biblical Times, Society of Biblical Literature: Archaeology and Biblical Studies, no. 5 (Atlanta: Society of Biblical Literature, 2003), which can be purchased here.

An additional image of someone churning butter with a goatskin container can be see here on LifeintheHolyLand.com.

One thought on “Picture of the Week: Churning Butter”