The site of Khirbet Bal’ama (or Belameh) is identified with ancient Ibleam, mentioned in the account of Jehu’s coup d’état (2 Kings 9:27) as well as in Thutmosis III’s topographical list at Karnak. Khirbet Bal’ama is located on the southern outskirts of Jenin, in the West Bank. The ancient ruins occupy some 9 hectares (22 acres) on top of a 160-foot-high (50 m), natural limestone hill. A walled town existed in the Early Bronze, Middle Bronze, end of Late Bronze/early Iron I, and possibly Iron II Ages.

The main spring was located at the northeast foot of the hill. Here, early explorers visited the entrance to a water system, though because of bats and debris/wash only a small part of a tunnel could be accessed. About the first 100 feet (30 m) of the tunnel were described in great detail by Gottlieb Schumacher in 1910, and it was excavated in 1973 on a small-scale by Z. Yeivin. The main excavation of the tunnel took place in 1996 and 1997 under the direction of Hamdan Taha.

(Excavations were also conducted on top of the hill, but publication is still forthcoming.) The location of the tunnel is marked in green on this site plan. 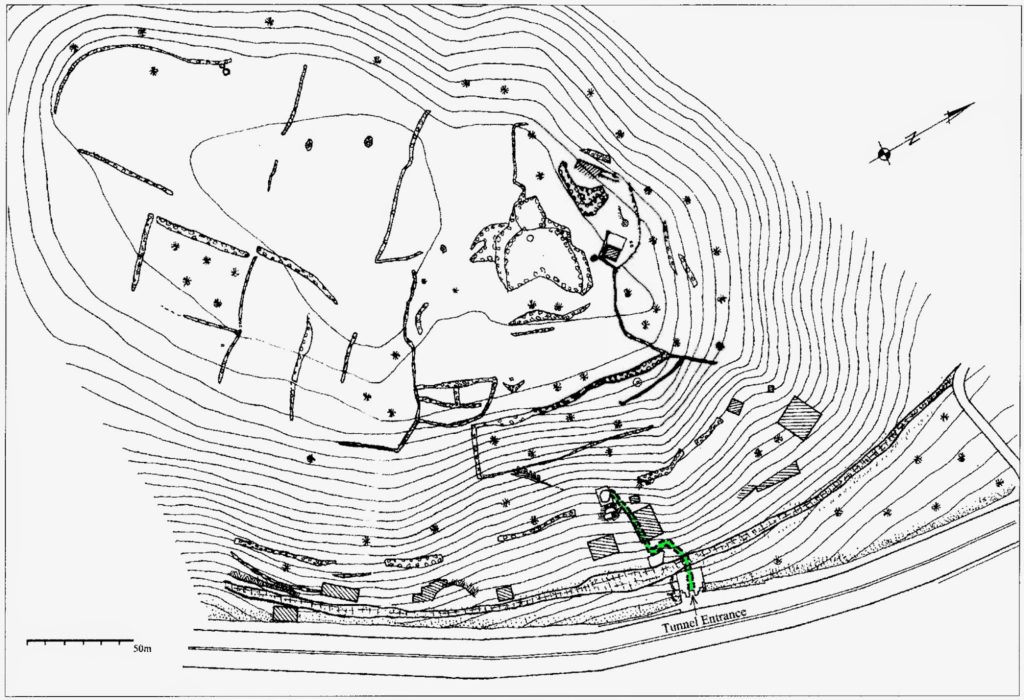 What raised my interest in this were reports the last two years of the water system outside Al-Walaja, near Bethlehem. In three seasons, the excavators at Khirbet Bal’ama cleared a total of 380 feet (115 m) of tunnel, but since they did not reach a shaft-entrance at the top of the hill, they suspect a long section of tunnel remains to be explored. Of the tunnel sections which were excavated, archaeologists discovered three entrances to the tunnel, the lowest of which provides access to the cistern/spring of Bir es-Sinjil (or Sinjib). The photo below shows the lowest entrance. The stairs with metal handrails on the right lead up to the second entrance.

The tunnel was apparently constructed in the Iron Age, though this is based largely on inference rather than clear, direct evidence. It was secondarily used in the Hellenistic and Roman periods. The cistern/spring was in use all the way up to the modern period. Nearly all of the explored tunnel is rock-cut. The tunnel has a parabolic ceiling between 10 and 16 feet high (3-5 m), and there are 57 rock-cut steps and lamp niches in the walls. The plan below shows the three entrances, steps, and slope of the tunnel. The three excavated entrances are approximately equidistant from one another, with about 100 feet (30 m) of tunnel between them.

A perhaps more-accessible report can be found in:

2 thoughts on “Water System and Tunnel at Khirbet Balama (Ibleam)”