The Israel Antiquities Authority announced the discovery of the palace of Queen Helena of Adiabene today.  You can read about it in this Jerusalem Post article or in this AFP article.  The JPost article also has a great photo of the excavation area.  Here are some parts of the JPost article with my thoughts.

The site, which has been unearthed during a six-month ‘salvage’ excavation in the Givati parking lot just outside the Dung Gate ahead of the planned expansion of the Western Wall car park, also indicates that the ancient City of David was much larger than previously thought, said archeologist Doron Ben-Ami, who is directing the dig at the site.

If you’ve been in Jerusalem in the last five years, you’ve seen this gaping hole just south of the Dung Gate – this is the same place.  I worked with our students as volunteers in digging here back in the fall of 2003, so it’s not exactly a new excavation as the article implies. 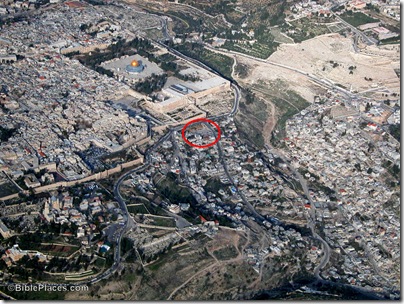 That the “City of David was much larger than previously thought” doesn’t make any sense to me.

The City of David has always been understood to be bordered by the Kidron Valley on the east and the Central Valley on the west and neither of those have moved in the last six months.  Nobody has doubted that there was construction in this area in the 1st century A.D., especially given the Crowfoot expedition in the 1920s.

The “monumental” edifice, which was destroyed by the Romans when they demolished the Second Temple in 70 CE, was dated to the end of the Second Temple Period by pottery and stone vessels, as well as an assortment of coins from that time, Ben-Ami said.

When we were there, we were digging in the Late Roman and Byzantine periods, and I’ve never been part of a dig where we found more coins than this one.

According to the director of the dig, the elaborate edifice, which is an anomaly in the landscape of the Lower City at the end of the Second Temple period – which was marked with modest buildings – was probably a palace built by Queen Helena, a wealthy Iraqi aristocrat who converted to Judaism and moved to Jerusalem with her sons.

The problem with this statement is that very little digging has been done on the crest of the City of David (as opposed to the eastern slope), and there was much destruction in later periods.  So there isn’t much to compare with.  If all they have is a magnificent building, I’d say it could be Helena’s and it could be someone else’s.

Helena is an interesting individual.  Her tomb in Jerusalem was the second most magnificent one in the ancient world (and it’s still impressive, although difficult to visit because of poor management by the French government; cf. Ant. 20.4.3).  Josephus wrote that Helena built three palaces in the Lower City (one for herself, one for her son and one for her mother-in-law; Wars 4.9.11; 5.6.1), which is (I think) the only basis for the identification of this building as hers by the archaeologist.

Though contemporary with the book of Acts, Helena is not mentioned in the New Testament.

Josephus connects her with the famine mentioned in Acts 11:28, indicating that she bought large quantities of food from Egypt to feed the people of Jerusalem (Ant. 20.2.3ff.).

The archeologists carrying out the dig have not yet found any inscription to identify the building they uncovered, but the excavation director said that there was a “high probability” that the site was indeed the 2,000-year-old palace of Queen Helena.  “We need more evidence to decide, but almost everything fits,” Ben-Ami said.

1) more of the City of David had been excavated, thus excluding other sites;

2) we had more knowledge of what else was in the City of David in the 1st century; all we really know is that these palaces were here, but it’s doubtful that these occupied the entire area;

3) finds from the building were of Mesopotamian origin (Adiabene was a province in northern Mesopotamia).

The well-preserved structure being uncovered in the ongoing excavation is an impressive architectural complex that includes massive foundations; walls, some of which are preserved to a height in excess of five meters and built of stones that weigh hundreds of kilograms; halls that are preserved to a height of at least two stories; a basement level that was covered with vaults; remains of polychrome frescoes, water installations and ritual baths.

This is great, but there were many impressive buildings in first century Jerusalem, so this alone is not sufficient to prove the identification.

Those interested in Jewish evangelism and conversion in the New Testament period would find Helena’s story worth studying.  For a start, take a look at the articles in Anchor Bible Dictionary on Proselyte and Circumcision.

Update: The JPost has a one-minute video of the excavations with an archaeologist talking about the discovery.  HT: Joe Lauer.

Update (12/7): InfoLive.tv has a 2-minute video, and this Arutz-7 article has numerous photos which show the well-preserved walls and some of the artifacts discovered.  The story is also covered by Reuters, Haaretz, and the AP.