Recommended: Zondervan Atlas of the Bible

For the last twenty years I have used and recommended Carl G. Rasmussen’s Zondervan NIV Atlas of the Bible (1989). This week the revised edition (now entitled, Zondervan Atlas of the Bible) was released and my appreciation for it has only grown. In short, I highly recommend this atlas for everyone from church-goers to Israel tour participants to college and seminary students. Here are a few reasons why I am so enthusiastic:


First-person knowledge of the land: The author has not only led dozens of study trips to Israel, Turkey, and Greece, he has lived in Israel for many years. His intimate knowledge and love of the 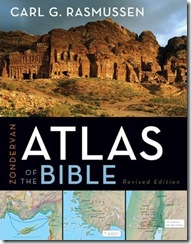 land and Scripture is reflected throughout the book.


Appreciation for geographical regions: Unfortunately it is unusual for an atlas to survey the distinct geographical units, but this atlas provides helpful summaries of the primary characteristics of the twenty major regions, such as the Jezreel Valley, Hill Country of Benjamin, Dead Sea, and Edom. If this is essential for you in an atlas, this is the one to get.


Historical survey from Genesis 3 to Revelation 3: The author begins in the Garden of Eden and ends with the churches of Revelation. That means that whatever event you want to know more about, you’ll find it here. More important than the broad scope is the accurate, knowledgeable treatment of the stories and issues.


Accurate, colorful maps: This atlas has more than a hundred full-color maps. There is a map on nearly every other page. I could wish for a few more detailed maps (e.g., Isaiah 10:28-32), but I’m certainly not disappointed with the quality or appearance.


Conservative convictions: This means a lot to me, and I was encouraged again and again to see that the author holds to time-tested views consistent with the biblical witness. That includes an early date for the patriarchs, an early date for the conquest, a willingness to allow that some of the Habiru may have been Israelites, and a high regard for the biblical descriptions of the reigns of David and Solomon.


Sound judgment: This, of course, is shorthand for “agrees with my conclusions,” but I was pleased to see, for example, that he suggests that Joshua’s Ai is “probably” Khirbet el-Maqatir, ignores the recent proposal that locates Sodom at Tell el-Hammam, and does not equate Kh. Qeiyafa with Shaaraim.


The end of the book: There are some terrific resources here, including the section on the disciplines of historical geography, Jerusalem, and the fantastic geographical dictionary and index.


What could be better? Some might not like the small font, which I assume is necessary because of the profusion of maps, timelines, and photos. I regret that the endnotes were removed in this edition, and students who want to pursue issues he brings up will not find any help here. I wish he had written more about (and come to different conclusions on) some New Testament issues, such as the locations of Emmaus, the baptism of Jesus, Bethsaida, and the Gadara/Gerasa issue. Some resources should have been updated, such as Context of Scripture instead of the 1969 edition of ANET.  In my opinion, publishers should avoid using a photo of a non-biblical site (Petra) on the cover of a Bible atlas.

Overall, I highly recommend this new edition and I would certainly commend it for use in preparatory work before traveling to the Holy Lands as well as for college and graduate courses on Bible geography.

4 thoughts on “Recommended: Zondervan Atlas of the Bible”