The British Museum today announces that one of its most iconic objects, the Cyrus Cylinder, will tour to five major museum venues in the United States in 2013. This will be the first time this object has been seen in the US and the tour is supported by the Iran Heritage Foundation.

You have to skip to the end of the article to see where and when the object will be on display:

What is the Cyrus Cylinder?

The Cylinder was inscribed in Babylonian cuneiform (cuneiform is the earliest form of writing) on the orders of the Persian King Cyrus the Great (559-530BC) after he captured Babylon in 539BC. It is often referred to as the first bill of human rights as it appears to encourage freedom of worship throughout the Persian Empire and to allow deported people to return to their homelands. It was found in Babylon in modern Iraq in 1879 during a British Museum excavation and has been on display ever since.

Neil MacGregor, Director of the British Museum, gave an interesting 20-minute talk on the Cyrus Cylinder at TED last year. The museum has posted a full translation of the inscription.

One caveat: visiting this exhibit does not excuse you from visiting the British Museum! (And before you go, you should purchase this excellent guide.) 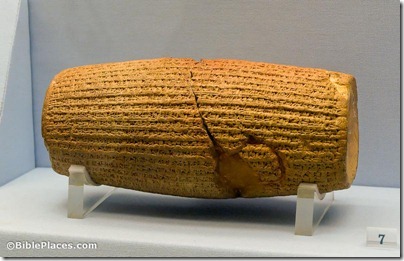 The Cyrus Cylinder in the British Museum
Share:
(Post by Seth M. Rodriquez)
Question: How much dirt does an archaeologist have to move?
Answer: None. The volunteers do all the hard work.  😉
Actually, the answer to this question depends on the site.  Sometimes an archaeologist only has to scratch the surface and the Early Bronze Age or some other ancient period is revealed.  At other times, there is a massive amount of earth that has to be moved before the archaeologist gets down to the period he or she wants to study.  Here is a good example.
Our picture of the week, “Robinson’s Arch,” comes from a resource available ﻿through LifeInTheHolyLand.com, the sister site of BiblePlaces.com.  The resource is called Picturesque Palestine, Volume I: Jerusalem, Judah, and Ephraim.  It is part of the “Historic Views of the Holy Land” collection.  This was originally a book that was published in 1881 and edited by none other than Charles Wilson, one of the most prominent explorers of the Holy Land in the nineteenth century.  The book is a fascinating read as it discusses the landscape, holy sites, archaeological sites, and local culture as they appeared at that time.
﻿ 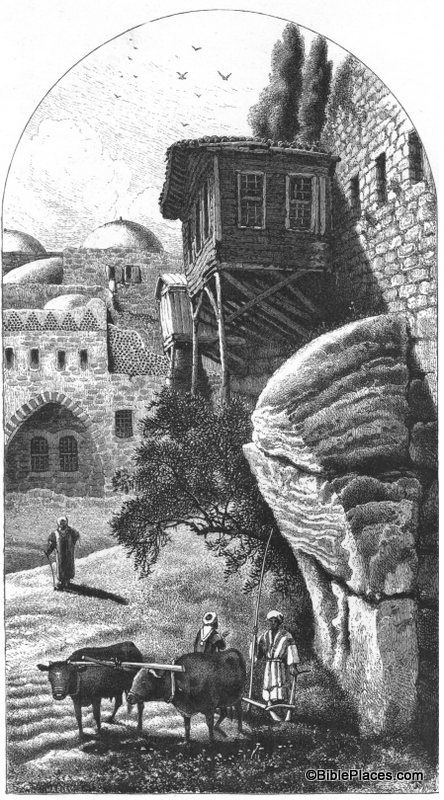 Robinson’s “Arch” is really just the lowest section of what was originally an arch.  It is called Robinson’s Arch because it was discovered by Edward Robinson in the 1830s.  You can see the remains of the arch on the right half of this drawing, towering above the two men and the oxen.  The arch originally spanned across the Tyropean Valley in Jerusalem and formed the upper section of a long stairway that provided access to the Temple Mount during the time of Christ.  (A reconstruction of this stairway can be seen here.)  The Tyropean Valley was filled in over the years, beginning with the destruction of the Temple by the Romans in A.D. 70.  Over the centuries the area was built up and torn down over and over again, accumulating debris until it looked like this in the nineteenth century.

Returning to our question (“How much dirt does an archaeologist have to move?”), archaeologists in the 1960s–1990s had to move several meters of debris during their excavation of this area.  The picture above is what the area looked like in the 1870s.  Compare that with what it looks like today: 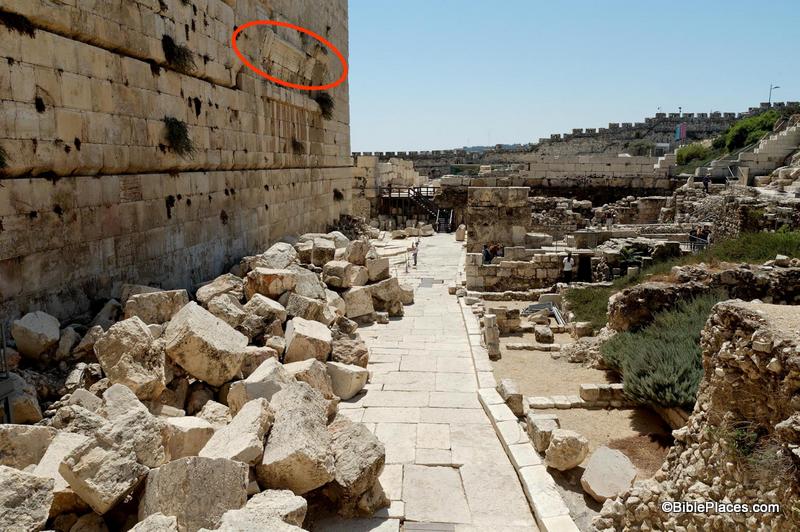 This picture (taken from the Jerusalem volume of the PLBL) is looking at Robinson’s Arch from the opposite direction as the drawing in Picturesque Palestine.  The arch is at the top of the photograph and circled in red in this photo.  You can see that it now towers over the remains of the 1st-century street below.  If you look carefully, there is a person standing on the street looking up at the arch.  That gives you an idea of the massive amount of dirt and stone that had to be moved by the excavation teams in recent decades.

This is just one example of the value of a work such as Picturesque Palestine.  It allows us to roll back the clock and see how the land appeared to the nineteenth century explorers before the excavations of the last 100 years.

This and other pictures of nineteenth-century Jerusalem are available in Picturesque Palestine, Volume I: Jerusalem, Judah, and Ephraim and can be purchased here.  Additional historic images of the Temple Mount can be seen here and here on the LifeInTheHolyLand.com website.  Several websites related to this topic can be found on the BiblePlaces website here.

Google Maps now includes floor plans of dozens of museums around the world, including the British Museum and the Smithsonian.

A couple of museums in Israel moved treasures to the vault because of danger from rockets from Gaza.

You can wait years to see an article about the New Testament city of Nain. Miriam Feinberg Vamosh ends the wait.

David Bivin thinks that the Nain where Jesus raised the boy from the dead is near Jerusalem in the upper reaches of the Wadi Qilt (subscription req’d for full article).

Joe Zias attempts to clear things up with regard to his role with the James Ossuary.

Perhaps you didn’t know: Wayne Stiles’ weekly column is available each Monday at the Jerusalem Post, but the edition on his personal site includes more content and higher-resolution photos. This week he travels to Chorazin (“Capernaum with a View”).

The PowerPoint presentation for Itzhaq Shai’s recent lecture on Tel Burna is available for download.

It is interesting to look through even without the audio.

Ferrell Jenkins shares some of his observations from the recent annual meeting of the Near East Archaeological Society.

A golden brooch from the treasure of King Croesus is returning to Turkey after the museum director sold it to pay off his gambling debts.

The National Museum of Iraq is scheduled to have a grand re-opening early next year.

Conservation efforts at Herculaneum are more successful than at its sister site of Pompeii. 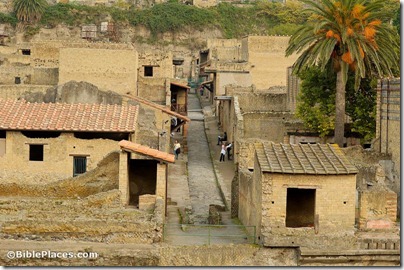 Ruins of Herculaneum from the west
Photo from the Pictorial Library of Bible Lands
Share:

An exhibit at the Western Science Center in Hemet, California, and sponsored by La Sierra University, has a display of military equipment from Jordan, Israel, Lebanon, and Syria open through the end of the year. Two lectures will be given this Thursday by university professors:

Kent Bramlett, “Ride that Chariot: The Rise and Fall of Chariot Warfare in the Ancient Near East.”

Douglas Clark, “Burn that Building: The Rise and Fall of a Village in the Early Iron Age.”

For more information about the lectures, see this article in The Press-Enterprise. For details and photos of the museum exhibit, see the university’s press release. 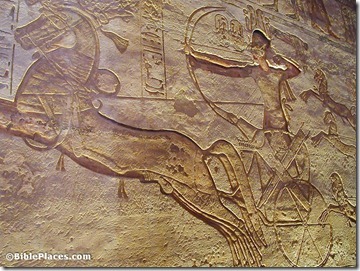 The Rose Guide to the Temple is available from the publisher today for $10 plus shipping (reg. $30; Amazon $20). We’ve recommended the book previously here. 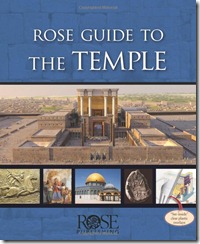 I did not put this list together, but my choices would be quite similar to Wayne Stiles’ picks. He writes:

Most of us give Christmas gifts that are quickly forgotten.
After the iPhone gets cracked, or the DVD gets watched, or the sweater gets snagged, they all end up at the landfill.
This year, why not give a gift that will last a lifetime?
Bible Lands study tools make great gifts because they take your personal Bible study to the next level. What’s more, they don’t wear out.
Here are my top 5 recommendations for gifts you’ll enjoy giving.

You can click over to see Wayne’s top 5, but his comments on the Pictorial Library of Bible Lands are worth quoting:

Even though I’ve been to the Holy Land many times, I’ll never see all of it. One resource will show you more than any other.

All together, the 18-Volume Expanded Edition of the Pictorial Library of Bible Lands includes more than 17,500 High Definition photographs from 9 countries in the ancient Mediterranean world.
My recommendation for starters? Get the “Israel Collection.” It includes volumes 1-5:

These are more than just High-Resolution pictures from the Holy Land. Special care has been taken to photograph biblical sites.
Nothing else rivals the Pictorial Library of Bible Lands. If a picture paints a thousand words, then thousands of high-resolution pictures are even better. I use these images almost daily on my blog, and I have used them for years in my teaching and personal Bible study.

His recommendations include an atlas, a study Bible, several devotional books, and an exclusive tour of Israel.

From the Caspari Center Media Review:

The Yardenit Baptism Site, situated on the Jordan River, is to undergo extensive development in the coming year. In order to improve the site, a fourth baptism station will be opened up, and “10 new ceramic wall hangings with the text from the Book of Mark 1:9-11, which speaks of John baptizing Jesus, [will be] added to the 70 plaques” that constitute the “Wall of New Life.” A representative from the site says that “the guiding principle underlining Yardenit … is the fact that it is totally non-denominational, and pilgrims are welcome to perform their baptism rituals in accordance with their particular beliefs and traditions.”

This must mean that business is good. In the meantime, it may be more difficult to get photos of the river without bulldozers and rebar.

The above article is not yet online. Copyright of the article remains with the Caspari Center. 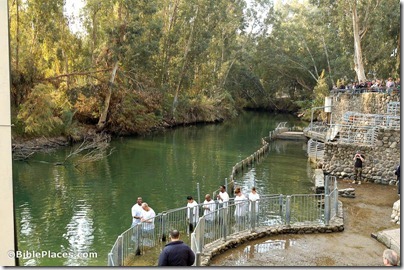 Jordan River baptismal site at Yardenit
Photo from Galilee and the North
Share:

The German Protestant Institute of Archaeology announces the upcoming lectures:

All lectures takes place in the institute (Auguste Victoria Compound, Mount of Olives) at 5 pm.

Randall Price answers the question in a 15-minute video available at truelife.org. The video is clearly aimed at those who are less familiar with the subject and it covers discoveries from both the periods of the Old and New Testaments. Price is the author of the recently published Rose Guide to the Temple.

One of the most head-shaking stories of early explorers in Jerusalem is that of Montague Parker’s expedition to discover the Ark of the Covenant. Stephen Gabriel Rosenberg tells the story in the Jerusalem Post, and if you haven’t heard it before, it’s worth the read. Here’s an excerpt:

With the help of his two Turkish supervisors, Parker and his men claimed an area of ground near the entry to the Gihon water system, known at the time as the Virgin’s Spring, which was then fenced off and guarded by Turkish troops, who did not allow entry to any locals or other visitors. The Jerusalem Pasha Azmey Bey had been suitably bribed to turn a blind eye to the work.
Parker’s activity naturally aroused the intense concern of the local archeological community. The Germans, French and British all had their missions in Jerusalem, but Parker would give out no communication and allow no inspection. His men proceeded with the digging, but they were amateurs and it went slowly and with little result.
Back in London, the Finnish scholar Juvelius had hired an Irish medium, who studied the documents and sent directions to the team about suitable locations. He advised Parker to search the long water tunnel, so Parker sent to London to obtain the services of two mining engineers who had worked on the Metropolitan Railway, the first line of the London Underground. Then he made another excellent move.

The full account is here. If you like stories like this, I recommend Neil Asher Silberman’s Digging for God and Country. The book is  out of print, but still available in used bookstores. 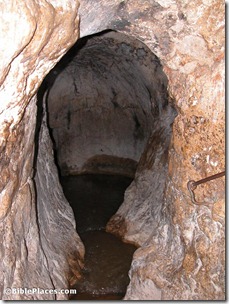