The Antiquities Authority announced Tuesday that it unearthed a rare 800-year-old lead seal from the Monastery of St. Sabas in Jerusalem.
[…]
The seal shows a bearded bust of a saint wearing a himation, while holding a cross in his right hand and the Gospel in his left. Surrounding it is a Greek inscription naming him “Saint Sabas.”
On the back of the seal there is a longer Greek inscription, reading: “This is the seal of the Laura of the Holy Sabas.”

During the summer of 2012, the Antiquities Authority conducted two archaeological salvage excavations at the Horbat Mizmil antiquities site in Bayit Vagan, which revealed the remains of a farmstead constructed during the Byzantine period (5th-6th centuries CE).
The archeologists said the excavated farmstead may refer to a farming settlement sold to the monastery in 1163–1164.
[…]
St. Sabas, or according to his Syriac name, “Mar Saba,” was one of the most important and influential leaders of the Christian monastic movement developing in the Judean Desert during the Byzantine period.
Sabas established several monasteries, but his crowning achievement was the construction of the Monastery of St. Sabas, referred to as the “Great Laura” in the Byzantine period.
The monastery, situated on a cliff overlooking Nahal Kidron, was home to several hundred monks.
“This is the only monastery in the Judean Desert continuously inhabited since its foundation, and even today there are circa 10 Greek monks who reside in the monastery belonging to the Greek Orthodox Church,” the Antiquities Authority said.

The full story is here. The IAA press release is here. 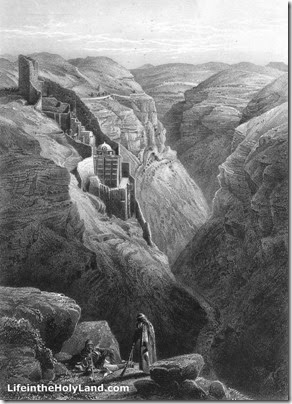 Today is Jerusalem Day and in honor of that Accordance Bible Software has a sale on some outstanding Jerusalem resources.

The photo collections should be mentioned first:

Five Jerusalem “atlases” published by Carta are also discounted (with my favorite at the top):

The sale page gives two examples of the dramatic changes visible in recent history at the Western Wall prayer plaza.

Check out these great resources before the sale ends on June 2!

The Moabite Stone, also called the Mesha Stela, is an inscribed black basalt monument written in the Moabite language in c. 835 BC. It stands nearly four feet tall and was found in 1868 in the land of ancient Moab, now modern Jordan. It contains references to biblical figures such as Israelite King Omri and Moabite King Mesha (cf. 1 and 2 Kings), as well as the covenant name of God, YHWH (cf. Exodus 3). It is now located in the Louvre.

The story of the discovery and eventual movement of the stone to the Louvre is quite interesting in itself. Originally discovered by a missionary, it was subsequently broken apart by the local population who heated it with fire and then poured cold water on it. Following this, they used the various pieces as amulets in their granaries. Eventually, after much wrangling among European powers and local tribes, 57 pieces (representing about 2/3 of the original) coupled with replacement parts were used to reconstruct the original. The reassembly was undertaken with the help of a paper squeeze of the surface that was made before it was broken apart.

Future post(s) will comment on some controversial aspects of this important artifact.

(Photo: BiblePlaces.com. Significant resources for further study: The Context of Scripture, Volume 2, pages 137-138; Lost Treasures of the Bible, by Fant and Reddish, pages 97-103.)

The first half of the season is finished at a site that may be Ai of the Bible. This year’s team is the largest ever, and most of the work is focused on remains from the first century. Gary Byers reports on some of the discoveries:

From one of these squares a second scarab at KeM was found. Last year’s scarab was considered to be the top find of Biblical archaeology in 2013 by Christianity Today Magazine (off-site link). This year’s scarab, from soil 15 feet from the first, has already been taken to an expert at Hebrew University for cleaning, restoration and analysis. Last season at KeM, we found a record total of 205 coins (See the report from 2013). This week, we found 112 coins – from every square but mine! Our numbers are impressive to archaeologists because they’re being found individually all over the site and not together in hordes. Squares led by Dr. Gene Merrill, dig Administrative Director Henry Smith, Abigail Leavitt and Dr. Brian Peterson all have cisterns (plastered and holding water) or silos (not plastered and holding storage jars). Many of our coins come from soil in these subterranean structures.

A full report with photos is here.

Aren Maeir reports on the highlights of the 2013 excavation season at Gath (Tell es-Safi).

A statue of a Phoenician priest dating to the 6th century BC has been discovered in Sidon.

The Pope has arrived in Jordan and heads to Israel soon.

Some religious Jews are afraid that if Catholic mass is permitted in the Upper Room that they will be unable to pray at the Tomb of David downstairs.

A new study suggests that some of Petra’s structures were intended to align with the solstices and equinoxes.

Archaeological work in Jerusalem indicates that it was the Roman construction of Aelia Capitolina that triggered the Bar Kochba Revolt (and not the other way around).

Have you ever wondered how Jonathan defeated the Philistines by climbing the cliff of Michmash?

Wayne Stiles explains it all with maps and photos.

Ferrell Jenkins and Leon Mauldin are traveling in eastern Turkey. They have recently visited Haran
and the Zeugma Mosaic Museum.

Muslims in eastern Syria have apparently destroyed a statue from the Neo-Assyrian period looted from Tell Ajaja.

The 2014 excavation season has begun at Tel Jezreel.

Judith McKenzie’s black and white photographs taken in 1982-1986 for The Architecture of Petra
(1990) are now all available online at the Petra Digital Archive. Other collections are also online, in high-resolution and free for use in educational and academic publications and research.

Matthew Kalman is reporting that the Jehoash Tablet has finally been returned by the IAA to its owner, Oded Golan.

An inscribed stone that may be the only remnant of Solomon’s Temple has been returned to its owner after an 11-year legal battle waged by the Israeli government. The Jehoash Tablet, also known as the “Bedek Habayit” inscription, is back in the hands of Tel Aviv collector Oded Golan, who plans to put it on public display in a major museum. Golan finally retrieved the tablet and hundreds of other items more than two years after he was acquitted of forging priceless antiquities in a seven-year criminal trial and nearly a year after the High Court finally rejected a last-ditch appeal by Israel’s state attorney and the Israel Antiquities Authority. After more than a decade of confrontation, Golan tells me he does not wish to be rushed into his next move. “Now I should exhibit it,” he says. “When, where, how – I don’t know. I’ll make a decision in the next year.” “But it should go on display in a major museum so the public can see it for themselves, together with all the test results carried out before and during the trial,” he says.

The full article includes a lot of background on the tablet. Access to this Haaretz article may require subscription. Kalman’s blog on the trial is here.

Haaretz reports on the restoration of frescoes in the Commandant’s Residence of Masada.

For 20 years, the frescoes that decorated the “Commandant’s Residence” (Beit Hamefaked) on top of Masada were stored away in a warehouse at the national park. This week, after a month’s work, a team headed by Italian expert renovator Prof. Maurizio Tagliapietra of the University of Verona and including employees of the Israel Parks and Nature Authority completed the restoration of another room on the top of the historic mountain.
The frescoes, which were discovered during the extensive archaeological digs conducted by Yigal Yadin in the 1960s, were glued to new backings and put back in their original locations on the walls at the time. But as time passed the effects of the weather, the high salt content of the air and vandalism by visitors eventually led to the decision to remove them and put them into storage. The frescoes were in a structure on Masada without a roof, and it was decided that only after a proper roof was built would they be returned.

The article includes a number of photos that show the restoration work. The Facebook page that the article references may be found here. 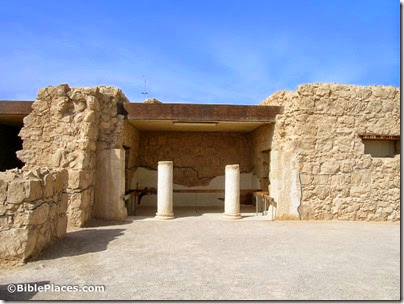 House of the Commandant at Masada
Photo from Judah and the Dead Sea
Share:

A Bone to Pick: Why Did We Hear Only One Side of the Camel Argument?

In advance of the pope’s blessing of the tabernacle from the boat altar, the New York Times profiles the excavation and resort of Magdala.

ArtDaily: “Egypt unveiled Thursday the 3,000 year-old tombs of two senior pharaonic military men in the famed Saqqara necropolis, one of them decorated with well-preserved reliefs depicting the afterlife.”

Aren Maeir’s recent lecture at the Oriental Institute on new directions in the study of the Philistines is now online.

The only museum of biblical archaeology in Latin America is in Sao Paulo, Brazil.

Where will the Pope go when he visits Jerusalem next week? His full itinerary is online.

Will the Pope’s visit to Jerusalem prompt the state of Israel to give more control of the Upper Room to the Catholic church?

The significance of the Jordan River and the baptismal site is explored in a 5-minute video (with transcript) by PBS.

The Yarkon River flows through Tel Aviv. Wayne Stiles explains why it is important to biblical history.

And I missed this one last week: 3 Sites by Beersheba You Seldom See—Arad, Besor, and Aroer

Where is King David Really Buried? This is the best explanation of the issue I recall reading.

Video: The new Waldorf Astoria has opened in Jerusalem at the same location, and with the same façade, as the 1929 hotel.

Bible History Daily: The 10 Strangest Foods in the Bible 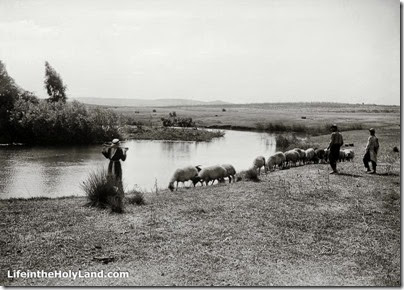 Source of the Yarkon River at Aphek
Photo from the American Colony Collection
Share:

The area between the Dead Sea and the Red Sea is slated for major development on the eastern side as Jordan has announced a master plan for constructing dams, lakes, and tourist venues.

From The Jordan Times:

The JVA will create a new specialised unit that will supervise the implementation of the development projects in Wadi Araba, a 165-kilometre long and 9-25-kilometre-wide area between Southern Ghor and the Gulf of Aqaba, an official at the ministry told The Jordan Times.
In the statement, Nasser underscored that the development ventures will be implemented once funding is secured, highlighting that the projects seek to attract people to live in Wadi Araba and businessmen to invest in the area.
[…]
Meanwhile, the planned Red Sea-Dead Sea Water Conveyance Project, which will pass through Wadi Araba, is expected to have a major impact on the area’s development by attracting investment, the minister noted.
“Lakes will be created to establish tourist projects, chalets and entertainment centres, in addition to artificial sea-water lakes for fish farming.”
[…]
Wadi Araba is situated along Rift Valley-Red Sea route, which is the world’s second most-used flyway, with 37 types of migratory soaring birds that maintain flight by using rising air currents, travelling on the flyway annually, according to the Royal Society for the Conservation of Nature.

The article gives more information about the planned dams, the agricultural development, and the migratory pathways. Jordan’s ability to attract tourism has proven poor in the past (compare Aqaba with the neighboring Eilat), but the popularity of Petra could help to boost interest in the Arabah in the winter months. 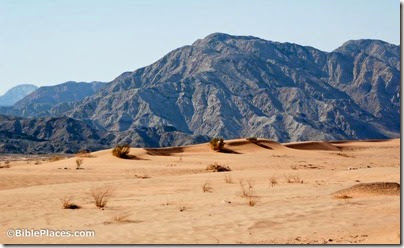