The Whizin Center and the Simmons Family Charitable Foundation’s 27th Annual Program in Biblical Archaeology is entitled “Bedouin, Archaeology, History and the Bible: Surprising New Answers for Old Questions.” This year’s lecturers are K. Lawson Younger and Clinton Bailey. The lecture titles are in the paper catalog, but not online.

A full list of events at the American Jewish University is here.

A Hebrew inscription from the 5th century AD attests to a Jewish community at Kursi on the eastern shore of the Sea of Galilee. Despite what the archaeologist says, it tells us nothing about the swine miracle, as Richard Bauckham observes.

Plans are underway to restore the treasures of Cnidus (Knidos) to their original location.

One year after it was damaged, the mask of King Tut has been repaired. DW has much more background on the restoration process.

Haaretz: “The National Library of Israel and Wikimedia have posted 200 historical maps of Jerusalem, some of them rare, on the Internet. The maps are high resolution and free for use.” You can access the images directly here.

Aren Maeir has written a brief piece on “The Philistines and Their Cities” for the Bible Odyssey website.

How much gold covered Herod’s temple in Jerusalem? Leen Ritmeyer thinks there was a lot.

The Deal of the Weekend at Eisenbrauns is Kirk Grayson’s Assyrian and Babylonian Chronicles
($90, reduced to $36).

Now online through The Bible and Interpretation, Yigal Levin’s article, “How Did Rabshakeh Know the Language of Judah?”

Father Juan Solana just wanted the archaeologists to leave. Then they discovered remains of Magdala at his proposed Christian retreat center. Smithsonian Magazine runs a feature story on the discovery of Magdala.

In a story published in The Atlantic, Joel Baden and Candida Moss recount how in six years the Green family has amassed one of the world’s largest collection of Bible-related artifacts.

Avinoam Danin died this week. He was best known for his popular Flora of Israel Online.

A
12th-century BC inscription from Lachish is shedding light on the
development of the alphabet.

The BASOR
article is available through JStor (subscription required).

The New York Times reports on questions raised by the Magdala
Stone.

The city of Beit Shemesh has discarded plans to build
a neighborhood near Khirbet Qeiyafa.

The Temple Mount Sifting Project is seeking suggestions for the significance
of a design incised on an ancient potsherd.

A
golden medallion with a depiction of a menorah is on display at the Israel
Museum for the first time.

The latest issue
of Biblical Archaeology Review includes articles on upcoming
excavations, a Jewish building in Turkey, and the Jerusalem model’s 50th
anniversary.

The latest Near
Eastern Archaeology is a special issue on “Crime and Punishment in the
Bible and the Near East.”

Carl Rasmussen recommends some
websites he checks each day.

Ginger Caessens is teaching Historical
Geography of Jordan this summer. This is the best way to learn
about “the other half” of the biblical lands.

The Palestine Exploration Fund Blog is beginning a series on Duncan
Mackenzie’s work at Beth Shemesh.

Wayne Stiles shows how a Bible story at Ein Kerem helps us to wait
on God.

New
Inscriptions and Seals Relating to the Biblical World, edited by Meir
Lubetski and Edith Lubetski is positively
reviewed in the RBL.

Archaeologists have found another ancient olive press at Shiloh.

The oldest known artifact of smelted lead has been discovered in a burial cave in the Negev.

George Athas provides some analysis of the Hezekiah seal impression.

“Hoards: The Hidden History of Ancient Britain,” an exhibit at the British Museum, illustrates the action of the parable in Matthew 13:44.

HaDavar Biblical Museum is now under construction in Hong Kong.

The Associates for Biblical Research have cancelled their Winter Dig for this year and are considering postponing next summer’s excavation.

PEF and the Early Exploration of the Holy Land is the title of a conference being held at the University of Haifa in December.

The Mount Carmel forest fire led to the discovery of a farming community from the first century.
‘Atiqot 83 is now online.

Wayne Stiles explains the providential irony in the discovery of the Tel Dan Inscription.

The government is appealing the transfer of the Davidson Center Archaeological Park to management by Elad.

ASOR will be posting some of the presentations from the Annual Meeting on their website.

Logos Bible Software is also giving away a free book a day during Advent.

From a press release from the Hebrew University:

Measuring 9.7 X 8.6 mm, the oval impression was imprinted on a 3 mm thick soft bulla (piece of inscribed clay) measuring 13 X 12 mm. Around the impression is the depression left by the frame of the ring in which the seal was set.

The impression bears an inscription in ancient Hebrew script: 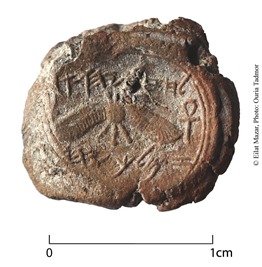 The bulla originally sealed a document written on a papyrus rolled and tied with thin cords, which left their mark on the reverse of the bulla. This bulla came to light, together with many pottery sherds and other finds such as figurines and seals, in Area A of the excavations (2009 season), supervised by Hagai Cohen-Klonymus.

The bulla was discovered in a refuse dump dated to the time of King Hezekiah or shortly after, and originated in the Royal Building that stood next to it and appears to have been used to store foodstuffs. This building, one of a series of structures that also included a gatehouse and towers, was constructed in the second half of the 10th century BCE (the time of King Solomon) as part of the fortifications of the Ophel — the new governmental quarter that was built in the area that connects the City of David with the Temple Mount. The bulla was found together with 33 additional bullae imprinted from other seals, some bearing Hebrew names, their reverse showing marks of coarse fabric and thick cords that probably sealed sacks containing foodstuffs.

The full press release, along with a 10-minute video, is posted here.