Several Aramaic and Greek inscriptions with the word “rabbi” have been found in the cemetery of Sepphoris at the time when Rabbi Yehuda HaNasi was alive.

A large church in the underground city of Nevşehir in Cappadocia has been discovered with many colorful frescoes. They estimate that the church dates to the 5th century.

Turkey is planning to restore Göbekli Tepe in order to boost tourism.

The Metropolitan Museum of Art is using lighting to restore the original colors to the Temple of Dendur.

The botching of the repair job on King Tut’s beard has resulted in a disciplinary hearing for eight officials.

Egypt is trying to revive tourism with 3-D scans of the pyramids, opening of new museums, and a highly publicized radar study of King Tut’s tomb.

Photography is once again permitted in the Egyptian Museum with purchase of a camera ticket.

Lost photos of Lawrence of Arabia have been discovered in the archives of the Public Records Office of Northern Ireland.

A short piece at the Jerusalem Post remembers Edward Robinson on the anniversary of his death in 1863.

Clay tablets suggest that the Babylonians invented astronomical geometry long before the Europeans did.

Can you identify these “mystery objects” discovered in the PEF collection?

Dale Manor is on The Book and the Spade this week talking about his on-going excavations of Tel Beth Shemesh.

Tim Frank’s Daughter of Lachish is now available on Kindle. I really enjoyed this work of historical fiction set in the biblical world. (I explain why in my review on Amazon.)

A Jerusalem Post article by the chairs of the PEF and the Early Exploration of the Holy Land conference describes some of the Temple Mount explorations by Charles Warren.

After a major sandstorm last week, Israel is gearing up for a mega-snowstorm this week.

A major archaeological campaign to ancient sites in southern Israel has led to big questions: Why did the people abandon the sites? Why were these desert-dwellers eating large quantities of fish? And where are the Nabatean remains in these so-called Nabatean cities?

The oldest Christian monastery in Iraq, St. Elijah’s Monastery, has been destroyed by ISIS.

A new exhibit, “Khirbet el-Maqatir: History of a Biblical Site,” is opening in February at Faulkner University’s Kearley Graduate School of Theology.

Newsweek takes a look at new technology being used to read ancient scrolls.

“An international team of researchers said Sunday they will soon begin analyzing cosmic particles collected inside Egypt’s Bent Pyramid to search for clues as to how it was built and learn more about the 4,600-year-old structure.”

A couple of items of note from the Caspari Center Media Review:

”This article protests the planning of a housing project on the southern slope of Karnei Hittin, as it is not only the location of famous battles such as the Crusader defeat by Saladin in 1187, but also one of the possible locations of the Mount of Beatitudes.”

“This article recounts a number of recently published tourism statistics for 2015. Of particular note is the fact that 52% of incoming tourists were Christian, with 22% declaring that they had come for pilgrimage. The average rate of satisfaction was 4.4 out of 5.”

Have archaeologists identified some of the pilgrimage roads that led up to Jerusalem?

The Dead Sea is a fascinating place, as Wayne Stiles shows from his research and with some good visual aids.

@PalExFund shares a great photo from 1903 of the “PEF Observation Rock” along the shore of the Dead Sea.

Though the winter season at Khirbet el-Maqatir was cancelled, Scott Stripling led a small group to Israel and he shares his diary of the places they saw and the friends they met.

You can listen to part 2 of my discussion with Gordon Govier of 2016 excavations as well as other recent programs at The Book and the Spade.

Shmuel Browns shares some beautiful photos from Makhtesh Gadol. And he is co-leading the Great Makhtesh Photograph Adventure next month.

ABR is introducing a new archaeology curriculum for children.

Test your knowledge of Jericho with a new quiz at the ASOR Blog.

Eisenbrauns has a sale on Israel Exploration Society publications for 30 to 50% off.

Ken Dark concludes that satellite imagery is less useful for discovering new features around the Sea of Galilee than fieldwalking and surface surveys.

Leen Ritmeyer notes that Jerusalem the IMAX movie is currently available for free on Youtube. 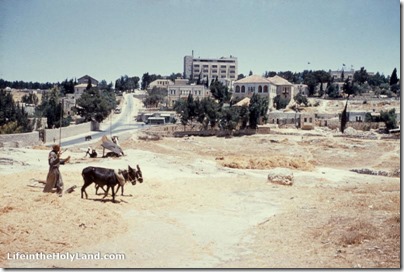 A Japanese team is excavating Tel Rekhesh, a city that may be biblical Anaharath.

Wayne Stiles explains what the apparently contradictory lessons of suffering and glory that Jesus revealed on the slopes of Mount Hermon mean for us today.

Another view on ISIS and antiquities: “Actual examples of ISIS-looted antiquities on the market are slim to none.”

Popular Archaeology has a feature story on the new exhibition on King Midas at the Penn Museum.

The city of Knossos was larger in the early Iron Age than archaeologists previously believed.

Gabriel Barkay and Zachi Dvira post a summary of their efforts to use crowd-funding to support the Temple Mount Sifting Project.

Bill Schlegel has posted a short flyover video of the Philistine city of Gath.

Who were the idols that the Thessalonian believers used to worship? Ferrell Jenkins shares photos from the museum in Thessaloniki.

Our most liked photo this week on Facebook was this image of the Ecce Homo arch, standing in Jerusalem since the year 130. 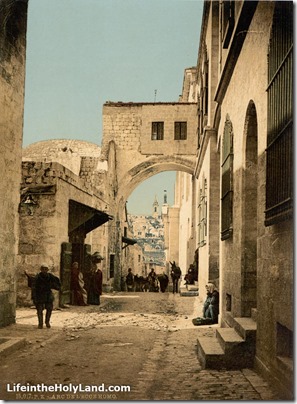 Archaeologists have uncovered an ancient road in Tarsus, not far from the Cleopatra Gate.

A new study suggests that the Romans contributed to an increase in human parasites, despite their advances in sanitation technology.

Wayne Stiles draws spiritual application out of a gate in Jerusalem that is blocked to prevent the Messiah’s arrival.


Washington Post: How 3D printers can help undo the destruction of ISIS

Lawrence H. Schiffman shares insights about Jews and Judaism that he gained from reading the New Testament.

Last week I was on The Book and the Spade with Gordon Govier discussing the top ten stories in biblical archaeology. This week we’re discussing upcoming excavations in Israel in 2016.

Eretz Israel Museum in Tel Aviv has opened a new exhibition on discoveries from Tel Rehov.

Israel’s underwater treasures need protecting, according to a recent post on the ASOR Blog.

Haaretz reports on the significance of the recently discovered seal impression of Hezekiah, son of
Ahaz, king of Judah.

Visits to the Temple Mount by non-Jewish and non-Muslim tourists has been going down every year since 2010.

A new video shows how a small excavation at Ein Lamur/Ein Limon is being used to strengthen the community.

Luke Chandler shares a video on volunteers excavating at Lachish.

The Review of Biblical Literature has been moved behind a paywall.

Helmut Koester died on New Year’s Day at the age of 89.

Israeli archaeologists working in the northern coastal city of Nahariya have uncovered a Canaanite citadel dating to 1400 BC. From Haaretz:

The Bronze Age citadel apparently served as an administrative center serving Mediterranean mariners, stated the Israel Antiquities Authority. It had been destroyed at least four times by fire and was rebuilt each time, says the IAA.
Among the artifacts discovered in the ruined citadel’s rooms are ceramic figurines with human and animal forms, bronze weapons, and pottery vessels that hadn’t been made locally – they had been imported. That is further testimony to the extensive trading relations among the peoples around the Mediterranean Sea basin.
Among the burnt layers, the excavators found abundant remains of cereals, legumes and grape seeds, the IAA said. Whether the grape seeds prove that wine had been made in the area remains an open question, though analysis of clay vessels dating to 4,000 years ago, from the cellar of a Canaanite palace nearby, found remains of red wine, and a fine, aromatic vintage fit for a king at that.

The story is reported by Haaretz, the Jerusalem Post, and others. High-res images and video are available here.

The press release and news articles do not make the connection, but the date of this fortress is close to the time of the Israelites’ invasion of Canaan under Joshua. According to the account in Judges, the Israelites were unsuccessful in dislodging the Canaanites who lived on the plains, including the area of what is today Nahariya. 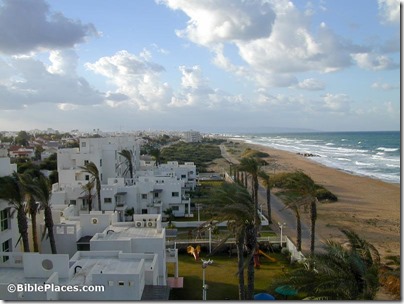 Greek and Danish archaeologists are excavating Lechaion, the harbor town of ancient Corinth.

An “ancient arch of Palmyra which was destroyed by Isis will be recreated in Trafalgar Square and Times Square using the world’s largest 3D printer.”

Albawaba has a roundup of the nine sites destroyed by ISIS this year.

The Irish Times reports on the work of Syria’s director of antiquities in these difficult days.

New from IES: Debating Khirbet Qeiyafa: A Fortified City in Judah from the Time of King David, by Yosef Garfinkel, Igor Kreimerman and Peter Zilberg.

Shmuel Browns shares some beautiful photographs he took at the Dead Sea.

Owen Jarus looks ahead to what to expect in the archaeological world in 2016.

Luke Chandler notes a new book by Dale Manor, Digging Deeper into the Word:  The Relevance of Archaeology to Christian Apologetics.

The three surviving bronze heads of Hadrian are currently on display at the Israel Museum.

Wayne Stiles is offering a discount on autographed copies of his three books.

Archaeologists unearthed a Byzantine-era sculpture of a male lamb in Caesarea. High-res photos are available here.

The Israel Antiquities Authority uncovered a farmhouse from 700 BC and a Byzantine church near biblical Aphek. High-res photos and a video are available for download. The story is reported by The
Times of Israel.

An ancient aqueduct has been discovered at Ein Hatzeva.

Israel’s Supreme Court has issued a ruling which will require antiquities dealers to maintain a detailed online inventory.

Scholars are using laser-scanning to create 3-D records of archaeological sites in Iraq that are vulnerable.

A $287 million USAID project in Jordan conducted a thorough environmental impact report for the construction of a wind farm and yet failed to identify portions of the Via Nova Trajana that would be destroyed.

Was Herod a hero? Alexander Stewart evaluates some recent biographies that provide a more positive spin while at the same time denying Matthew’s account of the slaughter of the innocents.

Congratulations to Chris McKinny on the publication of My People As Your People: A Textual and
Archaeological Analysis of the Reign of Jehoshaphat, published by Peter Lang.

Several lists have been compiled to review the year’s top discoveries in biblical archaeology. We’ll start with the annual compilation by Gordon Govier, published in Christianity Today. Though he initially described them as “top stories” of 2015 rather than “top discoveries,” the magazine has eliminated that distinction. Gordon and I will discuss his top ten list in next week’s edition of The Book and the Spade.

The Biblical Archaeology Society has selected their top ten discoveries of the year, choosing five similar to CT’s list and five others.

Haaretz’s coverage is less of a list and more of a skeptical story, including Ben Carson’s goof and Philistine opium.

If you’re interested in the broader world of archaeology around the globe, Heritage Daily offers its top 10. They include the “Akra” discovery and the gate of Gath in their list.

UPI has 15 photos for 15 discoveries, including the “Arca” (and that’s in quotation marks for more than one reason).

A list by Ancient Origins of the top ten includes a few from Egypt but nothing related to the Bible.
National Geographic identifies “seven major” discoveries of the year, topping the list with the “hidden chambers in Tut’s tomb.” If they actually discover those in the coming months, they can re-use that one again next year.

Nothing from the Middle East makes it onto Archaeology’s Top 10 list.

If I were writing a “top ten” list limited to discoveries made or first announced in 2015, I would include only these four: