Seven inscriptions from the Assyrian king Esarhaddon have been found in looter tunnels beneath the tomb of Jonah in Mosul, Iraq.

Egypt has announced the discovery of a large cemetery near the city of Minya. Photos are here.

“Remains of a 2,600-year-old statue with an inscription written in Egyptian hieroglyphics has been discovered in a temple at Dangeil, an archaeological site along the Nile River in Sudan.”

LiveScience reports on the excavations that have identified a different location for the Plutonium at Hierapolis.

The theater in Perga will be restored with a grant of 3 million Turkish Lira.

The Church of the Holy Sepulcher was closed for several hours today in protest of a new tax plan.

The US Supreme Court has ruled the Oriental Institute at the University of Chicago will be allowed to retain thousands of cuneiform tablets that originate from Iran.

The Minerva Center for the Relations between Israel and Aram is hosting its annual conference on
May 14–17, 2018, in Leipzig, Germany on the theme of “Re-Writing History by Destruction.”

Adriano Orsingher provides a short introduction to tophets on the ASOR Blog.

BBC and Netflix have created an 8-part series on the Trojan War that is the most expensive drama in
BBC’s history.

A 12-minute video on the discovery of the Isaiah seal impression describes the background and significance of this find. The video includes interviews with Eilat Mazar and Shmuel Ahituv.

Christopher Rollston issues some cautions about identifying that seal impression with the prophet Isaiah. He follows up with more here. Michael Welch goes further and says that the seal belongs to
Isaiah (son of) Nobai or Isaiah the Nobian and not the famous prophet.

Biblical Archaeology Review is honoring its founder Hershel Shanks with a double issue, the table of contents of which is now online.

Mark D. Smith investigates the probability of a body of an criminal executed by Rome being buried.

Wayne Stiles considers the purpose of Jesus’s transfiguration and its significance to us today.

Ferrell Jenkins recalls his own experiences in visiting the Jordan River near Jericho.

How was Jesus heard without a microphone? That’s the topic on this week’s The Land and the Book broadcast with Barry Britnell.

Sharon Herbert will be lecturing at the Albright Institute on March 1  on “New Work on the Sealings and the Archive from Tel Kedesh.”

Now’s a good time to sign up for the summer excavations at Tell es-Safi/Gath.

Eilat Mazar believes that she may have discovered a seal impression that belonged to the prophet Isaiah. The bulla was found south of the Temple Mount along with a couple dozen other seal impressions. The discovery is reported in the just-released issue of Biblical Archaeology Review.

Alongside the bullae of Hezekiah and the Bes family, 22 additional bullae with Hebrew names were found. Among these is the bulla of “Yesha‘yah[u] Nvy[?].” The obvious initial translation, as surprising as it might seem, suggests that this belonged to the prophet Isaiah.9 Naturally, this bulla is far more intriguing than all the others found adjacent to Hezekiah’s bulla….

Could it therefore be possible that here, in an archaeological assemblage found within a royal context dated to the time of King Hezekiah, right next to the king’s seal impression, another seal impression was found that reads “Yesha‘yahu Navy’ ” and belonged to the prophet Isaiah? Is it alternatively possible for this seal NOT to belong to the prophet Isaiah, but instead to one of the king’s officials named Isaiah with the surname Nvy?

The full story is in the latest issue of Biblical Archaeology Review, and stories based on that can be found at National Geographic and The Times of Israel.

A recent DNA study confirms that the “Screaming Mummy” is the son of Ramses III, and the hanging marks around his neck indicate that he was the conspirator who plotted to murder his father.

Haaretz: “About a dozen life-sized stone sculptures and reliefs of camels have been found in a markedly inhospitable site in northern Saudi Arabia.”

A 2nd-century Roman temple has been discovered in Kom Ombo, Egypt.

Randall Younker will be lecturing on “Ancient Worlds of the Bible” on Feb 23 and 24 in Medford,
Oregon.


The Times of Israel has a short article on a seal depicting Cupid that was discovered in Jerusalem in 2010.

The Albright Institute has a busy schedule of events in February and March.

Luke Chandler notes a new video on the Lachish excavation that includes a number of interviews
with dig volunteers and career archaeologists.

John DeLancey is wrapping up another tour of Israel.

The Book and the Spade is celebrating 35 years of broadcasts, and this week Mark Fairchild is on the program discussing the latest discoveries at Laodicea.

Gordon Govier was on The Eric Metaxas Show yesterday discussing the world of biblical
archaeology.

The tomb of Hathor’s priestess Hetpet has been discovered on the Giza plateau.

“More than 120 images of ancient Egyptian boats have been discovered adorning the inside of a building in Abydos” from the time of pharaoh Senwosret III.

Excavations of the ancient city of Hadrianapolis have revealed a 5th-century church that is decorated with images of the Gihon, Pishon, Tigris, and Euphrates Rivers.

Archaeologists have been working to discover evidence of Nabatean seafaring, including the location of their chief port, Leuke Kome.

The Awwam Temple is one of many historic sites at danger in Yemen.

Kurdistan is attracting tourists with its ancient fortresses, historic monasteries, and beautiful landscapes.

The “Khirbet el-Maqatir—A Journey through Biblical History” exhibit will open at Southwest Baptist University on February 24.

A 1920 article in National Geographic on the Samaritan Passover, with many photos now in the
American Colony collection, is posted online.

A colorful mosaic with a lengthy Greek inscription has been uncovered in Caesarea. The badly damaged mosaic features three men and dates to about AD 200.

Israeli security forces may have destroyed ancient ruins as early as the Middle Bronze Age in demolition work in Gush Etzion.

Biblical Archaeology Review is teasing “a major new discovery connected to an important biblical figure” in its upcoming double issue.

Israel has begun construction on a permanent pavilion for mixed prayer at the Western Wall near
Robinson’s Arch.

An Israeli family had be rescued while hiking in the Nahal Darga in the Judean wilderness.

Wayne Stiles explores the two times that Dothan appears in the Bible.

Carl Rasmussen shares photos from the Herodium display in the Israel Museum.

Leen Ritmeyer refutes the claims of some who argue that the Temple Mount is actually the Antonia Fortress.

Israel’s Good Name went on a hiking trip in and around the Wadi Qelt.

John A. Beck, author of The Holy Land for Christian Travelers and many other works, has just launched a new website. You can check out his resources and sign up for his quarterly newsletter.

Brad Gray has just launched a new website with a new eBook and a new weekly teaching series that I’m happy to recommend to you. His ministry, Walking the Text, is dedicated to helping people “learn, love, and live out the Bible” by explaining the original context. (I love that!) Brad knows how
to dig deep, and he excels at communicating truth in an engaging way.

You can see what I mean by visiting www.walkingthetext.com. Watch his new teaching video and download his outstanding new eBook “The #1 Mistake Most Everyone Makes Reading the Bible.” 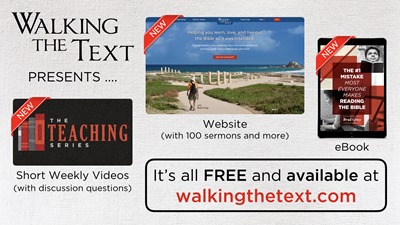 Lois Tverberg explains the reading tradition used in the synagogue in ancient times, and she provides a list of the triennial reading schedule used in the 3rd to 7th centuries.

Wayne Stiles’s post on “How to live the impossible Christian life” includes a beautiful photo of the Sea of Galilee.

The Young Archaeologists School in el-Alamein, Egypt, is teaching schoolchildren about the importance of archaeology.

“Why don’t most ancient Near Eastern languages have words for ‘blue,’ ‘yellow,’ or even ‘color’?”

G. M. Grena notes a couple of episodes on the “Excavating the Bible” show that mention LMLK seals.

Chris McKinny is one of the authors of a new article entitled “The Agricultural Landscape of Tel Burna: Ecology and Economy of a Bronze Age/Iron Age Settlement in the Southern Levant.

Aren Maeir has posted the schedule for the annual “Aharoni Day,” this year focused on ancient metallurgy.

Israel’s Good Name took a field trip to the IAA Warehouse and to the Rockefeller Museum.

Excavations of Ein Hanya in the Judean hills have concluded with an announcement of the discovery of an Israelite royal capital (proto-Aeolic?), a 4th century Greek drachma, and a Byzantine pool system. The site is associated in tradition with Philip’s baptism of the Ethiopian eunuch. The site will soon open as an archaeological park.

Eilat Mazar has returned to the Ophel to excavate, and this video shows a large cave she believes was in use during the First Temple period. An interview with Mazar includes an aerial photo with the excavation sites labeled.

A Roman tomb complex has been discovered in the northern Gaza Strip.

The ancient temple at Ain Dara, Syria, which is the closest parallel to Solomon’s temple, was heavily damaged in recent Turkish air strikes.

A radar scan is underway in King Tut’s tomb to determine if there are any hidden chambers.

Egypt announced the discovery of a 4,400-year-old tomb in good condition at Giza.

A man carrying a metal detector around the Nabatean ruins of Halutza was arrested for looting more than 150 Byzantine coins.

Five ancient statues stolen during Lebanon’s civil war are back on display in its National Museum.

The Museum of Ancient Greek Technology recently opened in Athens.

“A new exhibition showing at the Carthage National Museum highlights the links between the Carthaginian and Etruscan civilisations before the Mediterranean came under Roman dominion.”

Egypt’s Ministry of Antiquities is launching a project to document rare petroglyphs throughout the country.

Those of you interested in gaining insights into the Bible from its historical, geographical, and literary contexts will want to consider attending the Shepherd, Flocks, and Kings conference sponsored by the Institute of Biblical Context this June. I attended the first IBC conference last June and it was outstanding. I expect that this one will be better (and I plan to be back).

You can get all of the details at the Institute’s website, but here are a few of the talks that particularly interest me:

The faculty this year includes:

There’s an early bird discount if you register now, and this year they also have a student price. I expect that they’ll sell out before the early price expires.

One benefit you might not expect: when you go to a conference with a narrow focus like this one, you’ll connect with people of like mind, and you may well make lasting relationships.

The website has all the details and registration links.