Coins from the Jewish Revolt (AD 66-70) were found on March 26 by Dr. Eilat Mazar during renewed excavations at the Ophel.

“Elaborate decorations including stucco from the time of Nero have been found in the remains of a villa and bath complex in the outskirts of Rome.”

The February 2018 edition of the Newsletter of the Egyptian Ministry of Antiquities reports the latest archaeological discoveries, meetings, projects, and more.

A new study suggests that King Tut was not a sickly boy but a warrior king.

The Getty Conservation Institute announced that its restoration of the tomb of King Tut in Egypt is near completion.

The Nicholson Museum in Australia was surprised to discover an Egyptian coffin in their possession for more than a 150 years actually contains a mummy.


The Times of Israel profiles a tattoo parlor in Jerusalem that has been inking Easter pilgrims for centuries.

A schedule for the Haifa Phoenician Series 2018 is now online.

David Laskin attempts to look at ancient Rome through the eyes of Josephus.

The Albright Institute has posted its program for April and May.

Ferrell Jenkins shares a photo of an unusual sunrise on the Sea of Galilee. Leon Mauldin provides a wrap-up of their trip in Israel and Jordan.

Appian Media is preparing to film their second Bible-based video series focusing on Israel’s United Monarchy. Searching for a King will focus on the lives of Saul, David, and Solomon, and like their previous Following the Messiah series it will be available for free online.

But to make that happen, they need our support. They are nearing their goal of $120,000, but they need the last $10,000 now to close the gap. If you think that high-quality, accurate videos filmed on-site in Israel are a valuable resource for people all over the world, I encourage you to consider chipping in. Every little bit helps, and everyone benefits. 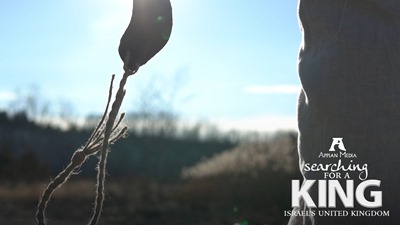 Archaeologists have discovered the oldest port in Iraq, a large harbor built by the Sumerians circa 2000 BC.

A US organization has kept the traditional tomb of Nahum in Iraq from collapsing.

Scholars have identified an ancient Greek medical text by Galen that was later covered by a 10th-century copy of the Psalms.

Fifteen years after 15,000 antiquities were looted from the Baghdad Museum, half of them have still not been located. Many have likely been sold on the antiquities market.

“Mapping Mesopotamian Monuments is a topographical survey of rock reliefs, historical monuments and architecture that covers all historical periods from ancient to modern.”

Touring Jordan: Ferrell Jenkins shares a photo of the Jabbok River and Leon Mauldin posts shots of Tell es-Saidiyeh (Zarethan?) and a sunset over the Dead Sea.

Apollo Magazine reports on the famous mosaics of Medeba.

In celebration of the acquisition of CDL Press, Eisenbrauns is offering a 30% discount on all volumes in the Cornell University Studies in Assyriology and Sumerology series. Use discount code CUSAS.

Clyde Billington is on The Book and the Spade this week discussing the Roman camp at Megiddo.

Aren Maeir was honored on his 60th birthday with a festschrift prepared for him by more than 100 contributors!

Professor Ephraim Stern, director of the Dor Project from 1980 to 2000, passed away Friday evening in Jerusalem.

An 86-year-old guide hiked the Nabatean Spice Route from Petra to Avdat over five days. On the last day they discovered a lost portion of the route.

The process of clearing mines from the area around the baptismal site on the Jordan River has begun.

A new study reveals that “pigeons played a central role some 1,500 years ago in transforming the Byzantine Negev into a flourishing garden.”

Philippe Bohstrom provides a good summary of where things stand with the seal impression of Isaiah.

Itzhaq Shai and Chris McKinny explain Canaanite religion at Tel Burna in the 13th century BC.

Israel’s Good Name recently spent the day at En Gedi, taking photos around the area and visiting the ancient synagogue.

An Israeli shepherdess is raising sheep so she can sell pricey shofars.

50% off retail price on the entire inventory of Wipf & Stock! They have some great books! Use code INV50 through April 3. Here are three of their books I love:

Or search their 300-page catalog here. (Sale includes books not listed in that catalog.) Or find Biblical Studies here.

For photographs, sometimes timing is everything. A recent example of this comes from Alexander Schick’s visit to Macherus after the discovery of a large mikveh (ritual bath). He took this photo in November 2016. 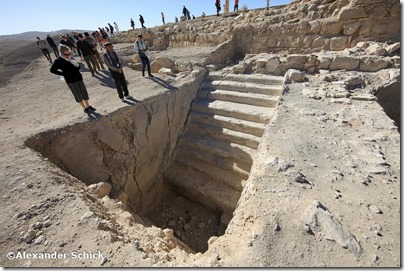 But he returned to the site a few weeks ago, and this is how it looks now. 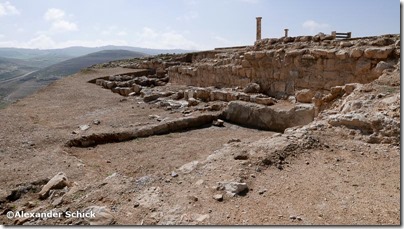 For reasons we can only speculate about (safety?, preservation?, anti-Jewish sentiment?), the mikveh has been filled in. Macherus is still a fantastic site to visit, but you won’t be able to see the ritual bath that its Jewish inhabitants used in the 1st century.
Share:

The Column of King Merneptah has been transferred to the Grand Egyptian Museum.

Researchers at Bowdoin College Museum of Art are working to reconstruct the color on ancient Assyrian reliefs.

The luxurious Roman silver Berthouville Treasure collection is now on display in Denmark.

James Mellaart, former excavator of Catalhoyuk, is accused of having forged murals and inscriptions that he claimed to have discovered.

Was the synagogue of Capernaum in Jesus’s day white or black? Leen Ritmeyer explains why it was black.

As Easter approaches, Carl Rasmussen shares related photos, including one of a “crown of thorns.”

Wayne Stiles looks at Abraham’s visit with Melchizedek in Salem.

The latest from Walking the Text is “Returning to the Path.”

This week’s program on The Book and the Spade addresses the tomb of Jonah and archaeological destruction.

For years I’ve used a helpful OT chronological chart with my students. Now Kris Udd is making it
available to the public (via Academia).

National Geographic announces a major find from Megiddo dating to the 17th century BC.

Undisturbed tombs are all too rare in professional excavations.

The extraordinary discovery of a magnificent and untouched 3,600-year-old burial chamber in the ancient Canaanite city-state of Megiddo has stunned archaeologists, not only for the array of wealth found in the tomb, but also for the potential insight it may provide into the royal dynasty that ruled this powerful center before its conquest by Egypt in the early 15th century B.C.
[…]
The surprise find began as something of a mystery, when archaeologists began to notice cracks in the surface of an excavation area adjacent to the Bronze Age palaces which were discovered in the 1930s. Dirt appeared to be falling away into some unseen cavity or structure below, Adams recalls. Then, in 2016, they happened upon the culprit: a subterranean corridor leading to a burial chamber.
The chamber contained the undisturbed remains of three individuals—a child between the ages of eight and 10, a woman in her mid 30s and a man aged between 40-60—adorned with gold and silver jewelry including rings, brooches, bracelets, and pins. The male body was discovered wearing a gold necklace and had been crowned with a gold diadem, and all of the objects demonstrate a high level of skill and artistry.
Apart from the rich, undisturbed burials, the archaeologists were also intrigued by the tomb’s location adjacent to the late Middle Bronze Age royal palace of Megiddo.
“We are speaking of an elite family burial because of the monumentality of the structure, the rich finds and because of the fact that the burial is located in close proximity to the royal palace,” Finkelstein explains.
The grave goods point to the cosmopolitan nature of Megiddo at the time and the treasures it reaped from its location on the major trade routes of the eastern Mediterranean. Along with jewelry, the tomb contained ceramic vessels from Cyprus and stone jars that may have been imported from Egypt.

National Geographic has more details, including the report of a DNA study being done at Megiddo.

Rome’s ongoing subway system project has uncovered several glimpses of the past, this time the ruins of a Roman military commander’s 14-room luxury villa. ASOR Cultural Heritage Initiatives has a report on the current status of the Ain Dara Temple. Authorities caught tomb raiders in Galilee as they used a bulldozer to loot graves from the Roman period. 3D computational geometry is being used in a long-distance virtual reconstruction to piece together ancient cuneiform texts. Christopher Rollston is on the OnScript Podcast speaking about the Isaiah seal impression. The Digital Archive for the Study of pre-Islamic Arabian Inscriptions “seeks to gather all known pre-Islamic Arabian epigraphic material into a comprehensive online database, with the aim to make available to specialists and to the broader public a wide array of documents often underestimated because of their difficulty of access.” A proposed restructuring at University College London may have adverse effects on the Petrie Museum. You can learn how to help here. Bible Gateway has published an interview with Lois Tverberg about her new book, Reading the Bible with Rabbi Jesus. On sale for Kindle: Provan, Long, and Longman, A Biblical History of Israel ($3.99). Accordance has a big sale going on now on atlases and related resources. The Satellite Bible Atlas is now available on Accordance, and it too is on sale (40% off) until March 12. BAS is offering subscriptions to its video lecture service for 75% off for a limited time. David Z. Moster’s latest video explains how to use the Biblia Hebraica Stuttgartensia. Wayne Stiles shares some new video footage shot over biblical Joppa. The LMLK Blogspot links to a new video of aerial footage of Hebron. HT: Ted Weis, Agade, Charles Savelle, Mark Hoffman

A headless statue of Aphrodite and a large mosaic were discovered during subway construction in Thessaloniki.

“Researchers have discovered the oldest figurative tattoos in the world on the upper arms of two ancient Egyptian mummies, the British Museum said.”

Iraqi authorities discovered 75 artifacts near the Shrine of the Prophet Abraham after a torrential rain.

Egypt’s Ministry of Antiquities Newsletter for January 2018 has been published.

Rome was covered by a rare snowfall this week. Photos here.

The Frist Center in Nashville is hosting over 200 objects from the Roman Empire, courtesy of the British Museum.

Four Persian kings are buried in the necropolis of Naqsh-e Rustam, including Darius I.

A Hungarian pilot has flown his stunt plane through the Corinth Canal.

Wayne Stiles explains how your mind is like an archaeological dig.

Adi Erlich reports the results from the renewed excavations of the Beth Shearim that she directed.

The closing of the Megiddo Prison will (finally) permit the opening of an archaeological park that features an early place of Christian worship.

“A rare, intact bronze ring from the Middle Ages bearing the image of St. Nicholas was discovered by chance during recent landscaping work in the garden of a home in the Jezreel Valley community of Moshav Yogev.”

The shrinking Dead Sea is attracting some strange people.

Photographs from the 1952 Qumran Caves’ Expedition are now online.

Israel’s Good Name explored some places in Jerusalem that many tourists never see.

On Purim 89 years ago the Graf Zeppelin flew over Tel Aviv and Jerusalem.

The entire double issue of Biblical Archaeology Review that celebrates Hershel Shanks is currently available in its entirety to all.

Accordance Bible Software is offering a large Lifeboat Switcher discount if you come over from any
other Bible software platform.