Excavations in the Sharafat neighborhood in west Jerusalem revealed a Hasmonean-era agricultural village. Haaretz (premium) has a longer article with more photos.

A study of the garbage dumps of the Byzantine city of Elusa in Israel’s Negev reveals that the city’s decline was the result of climate change.

The Malham Cave, under Mount Sedom near the Dead Sea, has been identified as the longest salt cave in the world.

The third artifact in the TMSP’s 12 object series is a fiscal bulla inscribed “Gibeon / to the king.”

Amnon Ben Tor will be awarded the Israel Prize in the field of archaeology.

Gabriel Barkay, an Israeli archaeology, recalls his experience in excavating Susa in Iran.

The Anglo-Israel Archaeological Society will be hosting lectures in the coming months by Amihai Mazar (on Tel Rehov), Jonathan Price (on Beth Shearim), and Jürgen Zangenberg (on Horvat Kur).

Andrea Berlin will be lecturing in Rockford, Illinois, on April 1, on “Phoenicians and Jews — A Tale of Two Peoples in Israel’s Upper Galilee.”

“Striking Power: Iconoclasm in Ancient Egypt” is a new exhibit at the Pulitzer Arts Foundation in St. Louis. A review article explains why so may of the statues’ noses are broken.

The latest video by the Institute for Biblical Culture is on “Ancient Israelite Fashion.” New classes in April include “The Prophets of Ancient Israel” and “The Geography of Biblical Israel/Canaan II.”

The founder of Sirin Riders explains why Israel is a great place to ride horses.

James Papandrea is on The Book and the Spade discussing his new book, A Week in the Life of Rome.

One of the most exciting, but least visited, biblical sites is Susa. It’s exciting because the entire drama of the Book of Esther takes place there, and we know exactly where Ahasuerus sat on his throne, and Esther approached him, and Mordecai overheard the conspiracy, and Haman waited in the courtyard.

Biblical Archaeology Review asked me to write about Susa for their “Site-Seeing” column for the current issue. You can flip to page 18 to see it, or it’s currently available for reading online.

My goal in writing the column was help you to enjoy the site and its rich biblical connections, especially if you’re not ready yet to sign up for a tour of biblical Iran! 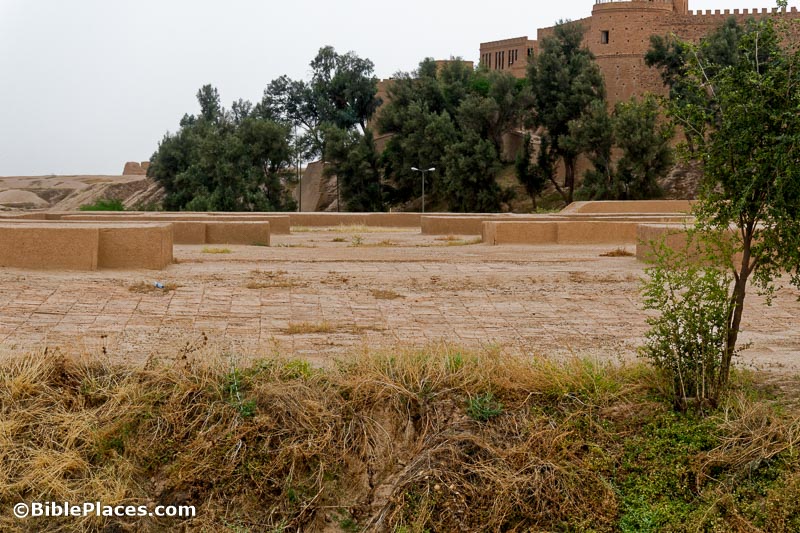 The throne room of Susa from the inner courtyard
Share: 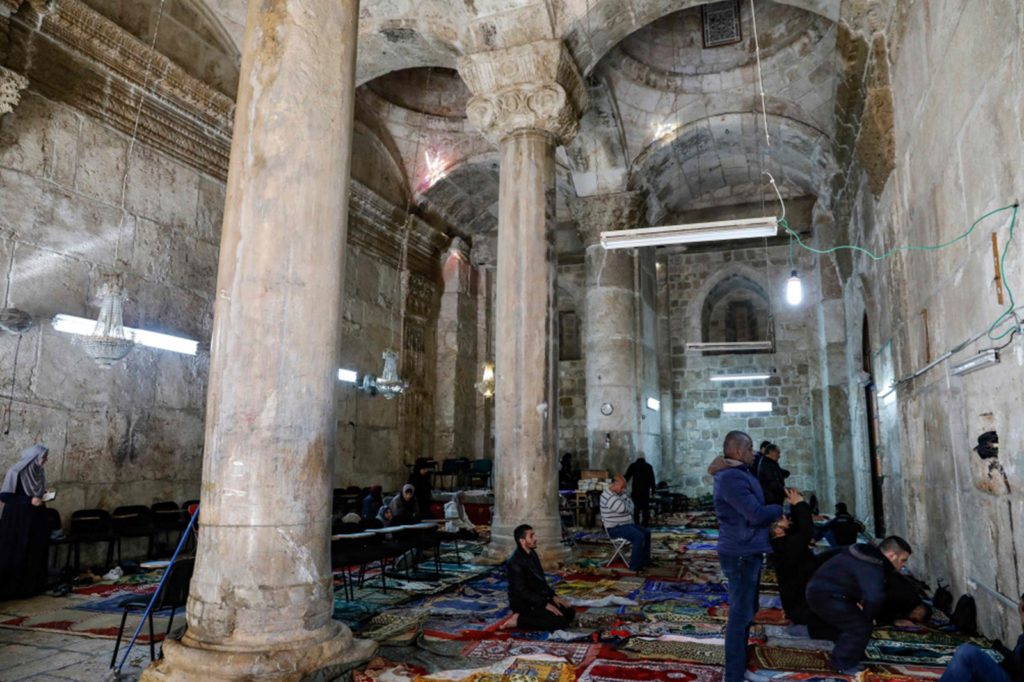 An attempt to smuggle into Britain an ancient Babylonian kudurru as a “carved stone for home decoration” with a value of “300” failed.

“Music was ubiquitous in Ancient Greece. Now we can hear how it actually sounded.”

Israel has become the first country to list all cemetery tombstones online.

The February 2019 issue of the Newsletter of the Egyptian Ministry of Antiquities includes the latest discoveries, repatriations, and news.

A Greek archaeologist has been working in Alexandria for 15 years in an effort to find the tomb of Alexander the Great.

A 3-minute video shows an animation of what the hanging gardens of Babylon may have looked like.

The Museum of the Bible is hosting a two-session lecture series on “Jerusalem and Rome: Cultures in Context in the First Century CE,” featuring Eric Meyers, Mary Boatwright, Lawrence Schiffman, and Steven Notley.

Eric Meyers will be lecturing on March 28 in Chapel Hill, North Carolina, on “Holy Land Archaeology: Where the Past Meets the Present.”

Six speakers will address the subject of “Egypt and Ancient Israel: Merneptah’s Canaanite Campaign—History of Propaganda?” in a conference at Southwestern Baptist Theological Seminary on March
26.

Chris McKinny’s recent lecture on “Tel Burna—After a Decade of Investigation” is now online. The video includes all of his visuals.

This is fascinating: Predators in the Thickets: A Film Interview with Two Botanists and a Zoologist in Israel. You’ll learn more about lions, bears, forests, thickets, the Zor, and the Ghor. The film is intended an introduction to the newly launched Dictionary of Nature Imagery of the Bible.

A Greek inscription found at the Nabatean city of Halutza confirms previous scholarly identification of the site as Elusa. The Times of Israel article provides more information about the results of the excavation.

Aren Maeir made a visit to Gath/Tell es-Safi this week, where everything is very green.

Cesares de Roma is a Spanish art project that has brought to life silicone images of Julius Caesar, Caesar Augustus, and Nero.

The Romans attempted to ban wild Purim parties in the year 408.

In light of the present controversy, Leen Ritmeyer explains the history of the Golden Gate of Jerusalem.

40,000 runners from 80 different countries ran 42 kilometers in the Jerusalem Marathon.

This isn’t new, but I haven’t seen it before: Flight of Faith: The Jesus Story is a 48-minute documentary with lots of aerial footage.

The Bible Lands Museum in Jerusalem has opened a new exhibit entitled “Highway through History.” As part of the launch, they have created a five-minute drone video of Beth Shemesh and the excavations in preparation for the road expansion.


The New York Times reviews “The World Between Empires” exhibit now at the Met.

The “Alexander son of Simon” ossuary is possibly related to the man who carried Jesus’s cross. It is on display now at the Museum of the Bible in Washington, DC, and this week they recorded a short video about it. Apparently they were so inspired by an inquiry from your roundup writer.

Egypt has preserved a unique Greco-Roman catacomb in Alexandria through a groundwater-lowering project.

The Egyptian site of Heliopolis is “a black hole in our knowledge of ancient Egypt.”

“A ram-headed sphinx carved from sandstone more than 3,000 years ago has been found in Egypt.”

The new exhibit “Ancient Egypt: From Discovery to Display” at the University of Pennsylvania Museum walks the visitor through the archaeological process.

John DeLancey shares photos he recently took inside the pharaohs’ tombs in the Valley of the Kings.

The top archaeological finds from Greece in 2018 include the oldest known excerpt from Homer’s Odyssey and the most intact ancient Greek vessel ever found.

Carl Rasmussen goes to Rome in search of an answer to the question, “Where did the Jerusalem Temple treasure go?” (Part 1, Part 2)

Emek Shaveh is requesting that the plans for renovation in the Jewish Quarter include opening the massive Nea Church from the Byzantine period.

The controversy continues over whether the Muslims can open the Golden Gate to worshippers.

The Karaite community is concerned that the proposed Jerusalem cable car will desecrate its ancient cemetery.

Mark Barnes explains why Jesus was crucified outside Jerusalem.

Ferrell shares a favorite photo this week of the Dead Sea.

A clever vandal spray-painted on the ancient synagogue of Merom, “This holy place will not be desecrated.”

The water level of the Sea of Galilee has risen above the lower red line for the first time in two years.

A study of the mountain fortress of Sela confirms the importance of the site in the Iron II period.

Video: An archaeologist is using drone imagery to track tomb looting in Jordan.

New clues to the lost tomb of Alexander the Great are being unearthed in Egypt (National Geographic).

“Sinai’s 500 plus photographic entries from mid 19th to mid 20th centuries . . . are now published online with detailed geography and history description . . . based on the 19-year field survey and maps of Sinai Peninsula Research (SPR).”

Somehow John DeLancey is able to post summaries every day for his tours, including their recent days in Egypt.

Iraq is seeking World Heritage List status for the ancient city of Babylon.

Tourists are apparently returning to the ancient city of Ur in southern Iraq.

Esagil, Treasure Hunt in Babylon, is a a board game with a real-scale map of ancient Babylon.

The opening of a spectacular ancient Jewish catacomb in Rome continues to be delayed.

What is “biblical archaeology”? Owen Jarus provides some definitions and an introduction to some of the controversy surrounding its use.

The majority, or perhaps even all, of the 75 new “Dead Sea Scrolls” fragments that have appeared on the market since 2002 are modern forgeries, according to Årstein Justnes and Josephine Munch Rasmussen. UPDATE: I am told by someone I trust that this article has many errors, including in its basic assertions.

ASOR has begun its March Fellowship Madness 2019 to raise funds to help students and scholars.

Ferrell Jenkins explains why he is fond of an “unattractive” photo taken at the Corinth Museum.

“A well-preserved Greek inscription from the 5th century recording a blessing for one ‘Master Adios’” was discovered in central Israel.

Plans to convert the Golden Gate of the Temple Mount into a Muslim place of prayer are being resisted by Israeli police.

Two crews of antiquities thieves working in eastern Samaria were arrested in recent weeks. One of them was looting Alexandrium-Sartaba.

A short trailer has been released promoting this season’s excavations at Tel Shimron.

There is still time to sign up for this summer’s season at Tel Burna. Shiloh has some openings as well.

Heavy rains this week caused flooding in the Jerusalem area.

The Times of Israel shares a photo essay of wildflowers of the Dead Sea.

Leon Mauldin reflects on Proverbs’ view of sluggards and ants, and he shares a photo of ants at Neot Kedumim.

I am on the Diligent Pastors podcast this week with Scot Chadwick, talking about the land of the Bible, photo collections, and preparing for a trip to Israel. Pastors especially may want to check out other episodes in this new podcast.