Aren Maeir is compiling a list of press reports and shares some of the video clips. One reporter offers a review.

After a Second Temple period burial cave in Jericho’s impressive necropolis was damaged by tractor work, hundreds of the bones were re-buried elsewhere.

Israel’s Supreme Court ruled that the identities of archaeologists working in the West Bank must not be released by the government.

A new entrance to the Tel Zafit National Park (the Philistine city of Gath) was dedicated this week. Aren Maeir shares lots of photos.

With temperatures in Israel soaring above 100 degrees F (37 C), wildfires are causing the evacuation of many communities in central Israel, including the Neot Kedumim Biblical Landscape Reserve.

Gordon Govier talks about Psalm 122 and the archaeology of Jerusalem on this week’s The Book and the Spade.

Peter Hessler tells the story of a how an Egyptian guard improvised in the early days of the Arab Spring to protect a site from looting.

Ferrell Jenkins shares a favorite photo of the ancient Diolkos near Corinth.

In a 20-minute video, David Moster shows what there is to see at the Museum of the Bible in Washington, DC.

Ferrell Jenkins explains why he thinks that “the two current volumes on Daniel and Esther may be the best.”

A unique trip has come to my attention that I think might be of interest to some of you. Mark Wilson is leading it, which automatically makes it worthy of consideration, and it is a tour of the Roman sites in France and Spain. The trip is jointly sponsored by Tutku Tours and Biblical Archaeology Society, which tells me that the quality will be high. Here is a brief rundown of what they’re calling “To the End of the Earth: Paul’s Journey to Spain”:

I can’t think of a better trip to France and Spain for those interested in the ancient Roman and New Testament worlds. So if you have this on your bucket list, this may be your best opportunity. All the details are here (pdf). 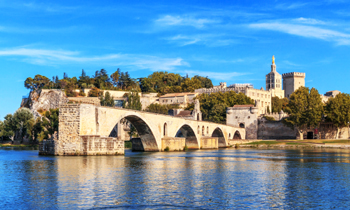 The Saint-Bénézet bridge and the Popes’ Palace in Avignon

“Ancient workers used molten iron to repair Pompeii’s streets before the historic and devastating eruption of Mount Vesuvius in A.D. 79.”

Greek authorities have granted permission for the restoration of the interior of the Parthenon in Athens.

Turkish officials have discovered an ancient mosaic that was illegally excavated in Çanakkale.

“Ancient treasures pillaged from conflict zones in the Middle East are being offered for sale on Facebook, researchers say, including items that may have been looted by Islamic State militants.”

In light of ISIS’s plundering, researchers have attempted to quantity the market value of artifacts from a single site.

The Biblical History Center in LaGrange, Georgia, is seeking approval to build a replica of the Sea of Galilee.

The Minerva Center for the Relations between Israel and Aram in Biblical Times has announced the list of speakers for its 2019 conference “Between Israel, Aram and Phoenicia: Archaeological and Historical Perspectives.”

BibleX has posted a mini-review of the Photo Companion to Daniel.

In an article posted on his Academia website (abstract here), Joe Zias argues that the “Cave of John the Baptist” actually depicts the Crusader patron saint of leprosy suffers, the man Lazarus from Jesus’s parable in Luke 16.

A military fortress from the 26th Dynasty has been discovered in North Sinai.

The April Newsletter of the Egyptian Ministry of Antiquities provides the latest in archaeological discoveries, exhibitions, inaugurations, and more. (As of this writing, the pdf has the pages in reverse order.)


The Harvard Gazette describes the background and value of the Digital Giza Project.

If you haven’t visited the Harvard Semitic Museum, you can now take a very nice virtual tour.

The topics on this week’s The Book and the Spade are the four-room house, slavery, and Selah.

Leon Mauldin writes about “the hearing ear” in the biblical and ancient world.

Max Richardson has been photographing in Jerusalem since 1985 and he shares some of his photos in The Jerusalem Report.

Mark Hoffman reviews the new Daniel and Esther volumes in the Photo Companion to the Bible series.

A statue likely depicting an Ammonite king in the 9th or 8th centuries BC was discovered near the Roman theater in Amman.

Jerald Starr argues that a plaque discovered by Sir Leonard Woolley near Ur depicts a temple prostitute.

Roman buildings like the Colosseum may have withstood earthquakes because of “seismic cloaking,” though it’s questionable whether this design was intentional.

John DeLancey is summarizing each day of his current tour to Israel, with the latest post about their visit to the Judean desert, the hill country of Samaria, Shiloh, and Beth Shean.

The Tel Burna Excavation team has released their lecture and tour schedule.

Carl Rasmussen explains and shows how early churches may have met in a second-story room above a shop.

Justin Taylor interviews Weston Fields about the history and significance of the Dead Sea Scrolls.

Clyde Billington and Gordon Govier discuss what the Bible has to say about horses and dogs on The Book and the Spade.

BiblicalCulture.org is offering a three-month long summer course in Biblical Hebrew. No previous knowledge is necessary. Classes begin in June.

The Temple Mount Sifting Project is beginning a crowdfunding campaign in order to move and resume their operations as well as publish their results.

Helga Weippert passed away in March.

“Life Lessons from Israel: Gezer” is the latest in the devotional video series by Biblical Israel Ministries and Tours.

BYU Magazine features a story about the Huqoq synagogue mosaics, with several photos and videos.

Dina Shalem explains the Peqi‘in Cave—A Unique Chalcolithic Cemetery in the Southern Levant (with many photos).

The W. F. Albright Institute of Archaeological Research is celebrating Albright’s 128th birthday on 5/24 by seeking 524 gifts of $128 each.

“The Book of Psalms” is the newest course at the Institute of Biblical Culture.

Wayne Stiles goes to Egypt’s Valley of the Kings to understand better the tension between God’s sovereignty and our choices.

In a new article published Thursday in the Tel Aviv journal, Israel Finkelstein, Nadav Na’aman and Thomas Römer argue that the Mesha Stele records the name of “Balak,” king of Moab (see Num 22) and not the “house of David,” as proposed by André Lemaire. Lawrence Mykytiuk considers the Balak reading dubious because it is anachronistic. Ronald Hendel says they are guessing and the word could be “Bilbo.” Michael Langlois is preparing a new study based on Reflectance Transformation Imaging in which he strongly argues for “house of David.”

Macherus III, the final report on the Herodian citadel, is now available. Gyozo Voros has done a remarkable job in publishing his results most expeditiously. A festival is planned in 2020 to celebrate the work, and a new fence line will parallel the 2-mile-long Roman siege wall.

Megan Sauter interviews Jonathan S. Greer, John W. Hilber, and John H. Walton about the new book they edited, Behind the Scenes of the Old Testament.

Bidding has opened at $10 in the Logos’s Community Pricing model for Survey of Western Palestine: Memoirs of the Topography, Orography, Hydrography, and Archaeology (3 volumes).

Check out the new “trailer” for the Bar Ilan University Land of Israel Studies and Archaeology Department.