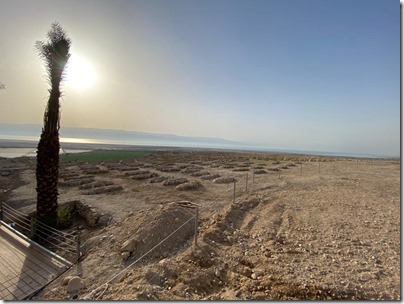 A seal impression of an official of King Jeroboam II has been discovered. It is a smaller version of the famous seal found at Megiddo in 1904 (and later lost).

An archaeologist has brought to light a menorah engraved in a Second Temple period tomb on the outskirts of Mukhmas (biblical Michmash), home of Jonathan the Hasmonean. The press release is here, and a journal article is available here.

Authorities are opening several new areas to visitors to Herodium, including the arched stairway, foyer, and private theater.

The underground excavations in Jerusalem took top prize for “Oddities of the Underground” at the International Tunneling and Underground Space Association Awards.

Bridges to the Bible has created their first series of videos, focusing on the communal culture of the biblical world.

Jerusalem University College will be hosting its first-ever online seminar on January 10 and 11. The event is free and open to the public.

Favorably reviewed in the NY Times: A World Beneath the Sands: The Golden Age of Egyptology, by Toby Wilkinson.

Ferrell Jenkins has a lengthy, informative post about the problem of emperor worship faced by the seven churches in Revelation.

Leen Ritmeyer’s post on the synagogue of Capernaum includes a number of beautiful reconstruction drawings.

Wrapping up her long-distance internship with the PEF, Jade Dang explains how the maps of the Survey of Western Palestine provide a fascinating snapshot of history.

December is the perfect month for an archaeological biography on Herod the Great.

“Who Were the Maccabees, Really? Hannukah, the Hasmoneans and Jewish Memory,” A Conversation with Prof. Joseph Angel and Prof. Steven Fine, Dec 15, 11 am EST.

In asking why Jews today do not read a scroll for Hanukkah, David Golinkin recalls that historically the Scroll of Antiochus was read, but he proposes beginning a new custom by reading 1 Maccabees 1-4.

The Sea of Galilee may fill up for the first time since 1992 after rising more than 10 feet in recent months. And since the water is not considered kosher for Passover, it isn’t pumped out during the week-long holiday.

Only 10 people gathered at the Western Wall for the priestly blessing during Passover, and Al Aqsa Mosque will be closed through Ramadan.

“With the coronavirus keeping Israelis indoors, dozens of jackals have taken over a deserted park in Tel Aviv, scavenging for food in what is usually a playground for joggers and families.”

Here’s another video of the 500 mines blowing up at Qasr al-Yahud near the Jordan River.

John Monson answered questions about the state of biblical archaeology in light of the closure of Southwestern’s program.

The Pergamon Museum in Berlin has posted a 16-minute virtual tour video of the Museum of the Ancient Near East (subtitles in English).

The Harvard Semitic Museum has been renamed the Harvard Museum of the Ancient Near East. The museum’s website includes a virtual tour of the entire museum.

Oxford University professor Dirk Obbink has been arrested on suspicion of theft and fraud of ancient papyrus fragments from the Oxyrhynchus collection.

The latest video from John DeLancey: Jesus heals the paralytic in Capernaum.

New: A History of Ancient Moab from the Ninth to First Centuries BCE, by Burton MacDonald.

Carl Rasmussen takes a more careful look at the famous Pilate Inscription, with particular interest in its connection to another “son of God.”

Agrippa I: An Archaeological Biography includes photos of coins of this king, Roman baths in Beirut, the Third Wall in Jerusalem, and the amphitheater in Caesarea.

Fun read: “‘Terminate and Liquidate’: How the Megiddo Ivories were Almost Not Discovered.” This fascinating story is taken from Eric H. Cline’s latest book, Digging Up Armageddon: The Search for the Lost City of Solomon.

“Pieces of papyrus sold as rare fragments of Dead Sea Scrolls to Southwestern Baptist Theological Seminary a decade ago are ‘likely fraudulent’ and the seminary might seek financial restitution.”

Sergio and Rhoda show how much the Sea of Galilee’s water level has changed in the last two years.

Egypt’s Ministry of Tourism and Antiquities is launching a series of virtual tours of some of its archaeological sites and museums, beginning with the tomb of Kheti at Beni Hasan.

“New University of Arizona-led research uses tree rings to shed light on discrepancies between archeological and radiocarbon evidence in dating the ancient volcanic eruption of Thera.”

The last land mine has been removed from the Jordan River baptismal area near Qaser al-Yahud, The article includes a video of 562 mines being set off.

Erez Ben-Yosef, director of the Central Timna Valley Project, is interviewed on LandMinds about metallurgy, nomadic societal organizations, and implications for the biblical record.

The Temple Mount Sifting Project has not stopped, though there are no guests or volunteers.

David Christian Clausen discusses the evidence for identifying the location of the Upper Room in Jerusalem.

Rabbi David Moster will be teaching Biblical Hebrew this summer in a 40-session online course. Readers use use the coupon “BiblePlaces” will receive a $500 discount.

For the 100th episode of The Teaching Series, Brad Gray takes a look at the significance of the number 40 in the Bible, reflecting on its repeated presence in episodes of testing and trials.

The Conference DVD Bundle for last year’s Institute of Biblical Context is on sale through Monday, with all 42 presentations available for $79 (digital) or $99 (DVD).

Some Carta resources are finally coming to Logos Bible Software, including The Sacred Bridge, The Quest, and the Carta Bible Atlas. A 13-volume set is also available.

Mark Wilson’s Seven Churches Network website has been greatly updated, including many of his published articles.

Ferrell Jenkins has posted a series this week showing photos of rolling stones from the Tomb of the Kings, the Herodian family tomb, Hesban, and Khirbet Midras.

In the ANE Today, Alex Joffe looks at pandemics in ancient and modern times.

The Museum of the Bible has begun a video podcast series entitled the “Lonesome Curator.” Episode 8 is on Lachish.

The coronavirus has changed burial practices in the Holy Land.

Church leaders are discussing how to allow some kind of celebration of Easter at the Church of the Holy Sepulcher.

There’s a report of illegal digging on the Temple Mount.

The Northwest Museum of Arts and Culture is offering its April lecture series on Pompeii via Zoom.

Google Arts & Culture has created an interesting photo story entitled “Exploring the Phoenician Shipwreck” from an expedition in 2019 off the coast of Gozo, Malta.

Mark Hoffman had some time for blogging yesterday:

Now is a good time to watch “The Week That Changed the World: A Journey through the Passion Week” with Wayne Stiles.

Christopher Rollston is a guest on the LandMinds video podcast discussing forgeries of antiquities.

Jeffrey Kloha is on The Book and the Spade discussing the “Fake Dead Sea Scrolls at the Museum of the Bible.”

A new study suggests that radiocarbon dates for the ANE need to be adjusted, with implications for the dates of the death of Tutankhamen and the eruption on Santorini.

Max Price writes about the history of pigs in the ancient Near East.

“The British Museum’s Circulating Artefacts (CircArt) project is a ground-breaking collaborative initiative against the widespread global trade in illicit antiquities, with a current focus on ancient objects from Egypt and Sudan.”

Shiloh is the subject of the latest in John DeLancey’s “Life Lessons” series.

Carl Rasmussen shares some Easter-related photos, including Jesus’s crown of thorns and an unusual photo of a Jerusalem cross.

Mark Hoffman found a Google map of ancient theaters, amphitheaters, stadiums, and odeons in Turkey. (There are more than you might expect.)

Ferrell Jenkins posts a couple of photos of Capernaum from the air.