The Cave of John the Baptist

The AP published a report yesterday, run by everyone, that an archaeologist had found “the cave of John the Baptist.” You can find it online everywhere, including this CNN page which has 3 photos (also Haaretz and Jerusalem Post). People have asked me what I think, so what follows is my response. I would note that I know Dr. Shimon Gibson, respect him and his work, and even participated in the excavation of this cave with our students on a handful of days in the past couple of years.

The question is: how do we know that this cave is associated with John the Baptist? In the last decades, scholars have been criticizing “biblical archaeology,” particularly for its haste in associating sites and levels with biblical events. Archaeological “proof” for such biblical stories is hailed until a later discovery shows the evidence to be flimsy and the conclusion incorrect. 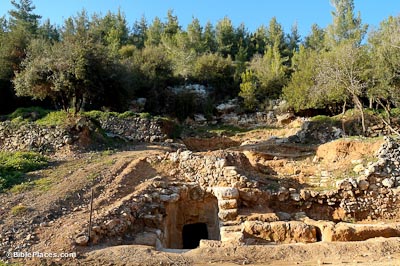 Gibson is not a “biblical archaeologist” and has no intention to prove the Bible correct. But I believe he makes the same mistakes as previous archaeologists in jumping to a conclusion for which the evidence is slim – particularly a conclusion which associates it with the Bible and therefore makes it headline-worthy. If this was just another Iron Age cistern used by hermits in a later period, no one would care about it. But if it’s identified with an important, and little-known, biblical figure as John the Baptist, the potential attention is profound and book sales multiplied (the book was released today – here it is at Amazon). And yesterday’s headlines bore this out – every website I visited had a link to the story, and the book’s sales rank at Amazon skyrocketed to #335.

Gibson is confident of the identification. He said, “I am now certain that this cave was connected with the ancient cult of John the Baptist. Indeed, this may very well be ‘the’ cave of the early years of John’s life, the place where he sought his first solitude in the ‘wilderness’ and the place where he practised his baptisms” (source). This is the claim that must be evaluated.

First, it must be noted that the main claim is that this cave was used by followers of John the Baptist, hundreds of years after his death (in the Byzantine period, AD 330-630). Pilgrims allegedly came to this cave to commemorate this man. The next issue is whether or not this pilgrim tradition is correct – if so, the cave could have been used by John the Baptist himself. These are two separate issues and answering one affirmatively doesn’t necessarily mean that the second is also true. If the first is true, but not the second, what is being hailed is yet another cave that pilgrims visited (erroneously). There are hundreds of such caves in Israel! Among the many examples, Byzantine pilgrims visited the cave where Mary allegedly breastfed Jesus (and milk dropped on the ground) – this is the Chapel of the Milk Grotto in Bethlehem (and pilgrims still visit and worship here).

So I am not impressed if this is another cave that the Byzantines believed to be a holy place. But I’m not convinced that this was such a cave in the first place. It’s a cistern. It has steps leading into it. There is a drawing of a man on the wall and another drawing of a head without a body. There is a foot carved into a rock. The cave is about 2.5 air miles (4 km) from Ein Kerem, the traditional place where John the Baptist was born (not grew up, not ministered). It is about 1 mile from the “St. John in the Wilderness” monastery, built over another cave which was the site of a chapel in the Crusader period (12th century). From the reports and from my own knowledge of the excavation, that’s the evidence.

The strongest support, in my opinion, is the location. The closest thing to this cave as far as important biblical events or people is John the Baptist. But what is to say that this cave is connected with biblical people at all? A figure sketched on the wall – what does this mean? There is nothing that identifies this as an important person, let alone John. There are no inscriptions or direct evidence to tie this to the biblical figure. The evidence is all circumstantial, and appears to me to be weak. I know of no other scholar or archaeologist who follows Gibson in this identification, though perhaps some will come to light with this dramatic announcement.  The book’s subtitle also suggests this discovery is being oversold: “The Stunning Archaeological Discovery That Has Redefined Christian History.”

It bears repeating that I have great respect for Dr. Gibson and his archaeological expertise. He is one of the most popular lecturers in our school’s weekly series. I also note that he has written numerous books that are highly recommended, including last year’s Jerusalem in Original Photographs. But I always felt during our time at the site and now with this announcement that this claim was very bold and the evidence meager. Perhaps the book contains the compelling evidence, but it seems strange that such would not be mentioned at the press conference.