Archaeologists working in a cave in Nahal Hever near the Dead Sea have discovered two dozen scroll fragments. Most are Greek translations of portions of Zechariah and Nahum. Also announced was the discovery of “the world’s oldest woven basket” and the mummified skeleton of a child.

The announcement this morning reported the results of an operation begun in 2017, and the archaeologists are seeking more governmental support to continue the hunt for ancient artifacts in the Judean desert. The Times of Israel reports:

The latest identified finds, two dozen 2,000-year-old biblical scroll fragments from the books of Zechariah and Nahum, were discovered in clumps and rolled up in the Cave of Horror. The conservation and study of the fragments was conducted by the IAA’s Dead Sea Scrolls Unit under Tanya Bitler, Dr. Oren Ableman and Beatriz Riestra.

The team has so far reconstructed 11 lines of Greek text that was translated from Zechariah 8:16–17, as well as verses from Nahum 1:5–6. They join nine, much more extant fragments that were discovered by Yochanan Aharoni, who first surveyed the Cave of Horrors in 1953.

On the new fragments, as well as in the Greek translation scroll discovered by Aharoni, only the name of God appears in Hebrew. It is written in the Paleo-Hebrew script used during the First Temple period, as well as by some adherents of the Bar Kochba revolt (132–136 CE), including on coinage, and in the Qumran community.

For the full story, photos, and a video, see The Times of Israel, The Jerusalem Post, The New York Times, and other major news outlets. 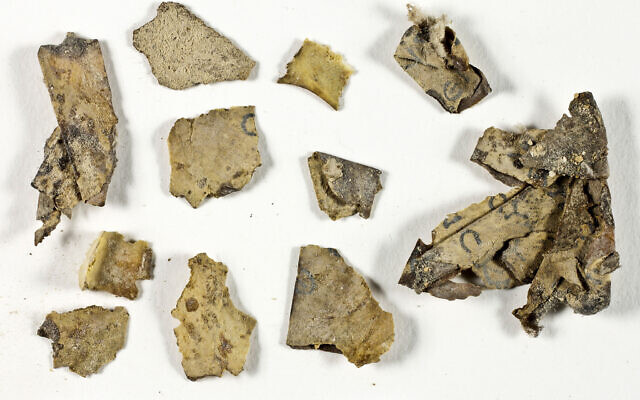 AhramOnline explains why 2020 was a good year for Egyptian archaeology.

“Ramses and the Gold of the Pharaohs” is a new exhibition that has been approved by the Egyptian government to tour Houston, San Francisco, Boston, London, and Paris from 2021 to 2025.

Not all scholars are convinced that Salome’s dance floor in Herod’s palace at Macherus has been discovered.

A woman’s garden ‘stepping stone’ turns out to be an ancient Roman artifact.

CAMNES has announced its livestream lecture schedule for 2021.

Groningen-Leuven-Oxford Network Workshop on Hebrew Bible and Jewish Antiquity will be held on Mar 8 and 9. It is free and open to the public.

Kipp Davis is featured on The Book and the Spade as the “Dead Sea Scrolls Detective.”

Carl Rasmussen writes about a very unusual Roman building on the outskirts of ancient Tarsus.

Ferrell Jenkin’s latest post about the seven churches of Revelation includes a unique rooftop view of Thyatira as well as a new picture of the recently reconstructed stoa.

Funding has been allocated to install a new, retractable floor in the Colosseum of Rome. The restored version will include replicas of trapdoors, lifts and other mechanical elements.

Michael Arnold explains how Phoenicia’s banking and commerce allowed them to thrive in the Mediterranean world for a millennium.

A new project is examining the impact of dams on archaeology and heritage in the Middle East and North Africa.

New: M. Campeggi, Karkemish. Report on the Investigations in the Area of the Halaf Kilns at Yunus, by M. Campeggi (fascicle for purchase; download free)

New: Zoara, the Southern Ghor of Jordan: A Guide to the Landscape and Heritage of the Lowest Place on Earth, by Konstantinos D. Politis (open access)

Francesco M. Benedettucci has created a very extensive listing of internet resources on the archaeology of Jordan. The latest updates are provided on his Academia page.

Mark Wilson has published an article in Adalya: “The Discovery of a Menorah in Attalia (Kaleici, Antalya) and its Significance for Jewish Communities in Pamphylia” (pdf).

Online lecture on Jan 5: Ido Koch will be speaking on “One Hundred Years of Assyrian Colonialism,” from the campaigns of Tiglath-pileser III to Ashurbanipal. To receive the Zoom link, write to write to [email protected].

Online lecture on Jan 14: Why are the Dead Sea Scrolls so Sensational?, by James Charlesworth

“Alex Joffe, JP Dessel, and Rachel Hallote announce a new podcast, This Week in the Ancient Near East. Recent episodes feature discussions of the role of a comet in ushering in plant and animal domestication, the discovery of cannabis and frankincense in a Judean temple, an Iron Age figurine suggested to depict the face of God, and other new and interesting finds.” Listen or subscribe on Podbean, Apple Podcasts and Google Podcasts.

The latest on Thin End of the Wedge podcast: Daniel Nicky: Teaching Mesopotamia through music.

In a flashy new video, Aren Maeir invites you to join his team in excavating the Philistine city of Gath this coming summer.

Mike Beall and Mike Markowitz provide a tour of coins of the Bible in a 33-minute video conversation.

Carl Rasmussen gives some suggestions for enjoying what he considers to be the most beautiful museum in Athens: The New Acropolis Museum.

An Egyptian mummy with a woman’s portrait turned out to be a 5-year-old girl, based upon a study using high-resolution scans and X-ray microbeams.

SURA is a new project that will make available to the public 7,000 historic glass plate negatives from the Egyptological library of the Royal Museums of Art and History in Brussels.

“New analysis of a First Book of Breathing papyrus sheds light on its derivation from the Book of the Dead and postmortem deification in ancient Egypt.”

Wayne Stiles shares photos and looks at lessons to be learned from the pyramids of Giza.

The Greek Reporter has created a short video showing the conservation and transportation of the mosaic of the Villa of Dionysus at Dion.

Gordon Govier asks, “Where are the other fake fragments of the Dead Sea Scrolls?”

I just learned about thebiblesleuth.com, a weekly blog that links the Pentateuch with archaeological findings, following the Jewish annual reading cycle of the Torah. The blog is written in serial format, with the focus this year on the Iron Age IIA period (early Israelite monarchy).

In a three-minute video, John Currid answers the question, “Why is archaeology useful to Christians?”

“Owning the Past: From Mesopotamia to Iraq” is a new exhibition at the Ashmolean Museum at Oxford.