An Egyptian statue resembling King Tut sold for $6 million in a controversial auction.

A luxury hotel built in Antakya (biblical Antioch on the Orontes) preserves the ancient ruins found below.

Boxes of material from Jerry Vardaman’s excavations at Macherus have been dug out of storage and will be studied and published.

Omri Lernau explains what kinds of fish were eaten in ancient Jerusalem.

The latest issue of Biblical Archaeology Review is a double issue, featuring articles on the wise woman of Abel Beth Maacah, the Royal Stoa of the Temple Mount, Jewish purity practices, inscriptions from Mount Gerizim, and the Copper Scroll.

Here’s a tutorial on how to write in cuneiform.

The newest Bible Land Passages documentary has been released. This 18-minute video looks the candidates for the tomb of Jesus.

In a recent episode of Hebrew Voices, David Moster explains how toilets worked in ancient Israel.

And David just produced part 2 of “How to Use the Biblia Hebraica Stuttgartensia: the Masorah Notes” (20-min video).

Recent interviews on The Book and the Spade:

Carl Rasmussen explains how a Lewis Bolt was used to lift heavy stones in the ancient world.

Leen Ritmeyer shares some photos from his underground work at the Temple Mount in the 1970s.

A friend at my church is leading a 20-day tour of New Zealand this January and he has a few open spots. He’s a native New Zealander and a seminary graduate, and he will be giving biblical instruction along the way (for example, NZ has 30 million sheep!). I can’t imagine a better tour of New Zealand. Here’s a flyer with more info.

A Roman-era cemetery with 32 tombs has been discovered near Hebron.

Archaeologists have discovered what is “probably the most ancient archaeological solid residue of cheese ever found” in the sands near Saqqara.

A couple of new studies identify the sources of ancient Egyptian copper.

“An antiquities museum in Syria’s rebel-held province of Idlib” has reopened after five years. The museum holds some of the Ebla tablets and was damaged in the war.

“The UCLA Library and Early Manuscripts Electronic Library have partnered with St. Catherine’s Monastery to digitize and publish online on an open access basis some 1,100 rare and unique Syriac and Arabic manuscripts dating from the fourth to the 17th centuries.”

Alexander Schick has written an extended article about the Temple Mount. If you don’t read German, there are many photos of interest.

Gabriel Barkay’s lecture, “Was Jesus Buried in the Garden Tomb?” from 2006 is now available online at Jerusalem Perspective.

The latest excursion of Israel’s Good Name takes him to Gath and the Museum of Philistine Culture in Ashdod.

The Columbian has a touristy piece on Jaffa.

A number of streams in the Golan Heights that are popular with hikers have been closed due to contamination.

The oldest hippopotamus in captivity has died at the age of 59 at the Jerusalem Biblical Zoo.

The four volumes of the Tel Beth Shean excavation reports are now available for free in pdf format from Amihai Mazar’s academia website. He has also posted a chapter on Tel Rehov in the 10th-9th centuries.

The next five episodes of “Following the Messiah” are set to release next week, and there is some relevant information that I wanted to pass on.

First, Episodes 6-10 will all be free on Appian Media’s website as well as on YouTube, beginning January 12. They will also be posting several “Behind the Scenes” videos. Episode 6 focuses on Jesus’s miracles, Episode 7 is on his teaching, and Episodes 8, 9, and 10 address his crucifixion, burial, and resurrection.

They are also hosting three events, with invitations to the general public. The events are free, but reservations are required.

You can also see the first event streamed live on Facebook on January 12 at 6:45 Eastern Time. It’s recommended that you like Appian Media on Facebook in order to see the event.

This is a great project to enjoy, share with friends, and support. 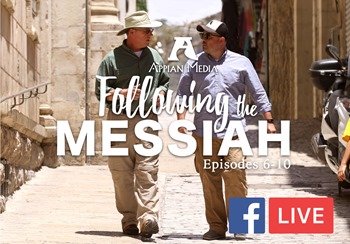 Last year scientists conducted a first-ever examination of the traditional tomb of Jesus inside the Church of the Holy Sepulcher in Jerusalem. Test results now reveal that the mortar used to secure a slab over the traditional burial bench of Jesus dates to the 4th century. This confirms that this is the tomb venerated by Christians when Constantine built the first church here.

The story is reported by various sources, including National Geographic. This paragraph is the most important:

While it is archaeologically impossible to say that the tomb is the burial site of an individual Jew known as Jesus of Nazareth, who according to New Testament accounts was crucified in Jerusalem in 30 or 33, new dating results put the original construction of today’s tomb complex securely in the time of Constantine, Rome’s first Christian emperor.

Elsewhere the article several times mentions “surprises” from the investigation. But I think those are best understood either as journalistic editorializing or perhaps the researchers trying to justify the expense. The best word for this study is “confirmation.” We now have physical evidence for what historians have long thought: the Church of the Holy Sepulcher was first built in the 4th century over a tomb believed to have been used by Jesus.

“In an statement timed just ahead of Passover, the Temple Mount Sifting Project said Sunday it had found a stone finger that may have belonged to a Bronze Age Egyptian statue, but conceded it wasn’t sure.”

For the first time ever, a reenactment of the Passover sacrifice took place in the Jewish Quarter.

Wayne Stiles has released the third video in his virtual tour of the Passion Week.

Carl Rasmussen has written a series of informative posts related to Jesus’s trial and crucifixion, including “Another Gethsemane?,” “Site of Crucifixion of Jesus?,” “Gordon’s Calvary,” and “The Burial Bench of Jesus?”

John DeLancey is on The Book and the Spade discussing the latest renovations of the edicule in the Church of the Holy Sepulcher.

DeLancey also recently announced a tour this fall of Egypt, Jordan, and Israel.

An archaeologist claims that a thick layer of sand at Tel Achziv attests to a tsunami that hit the coast of Israel in the 8th century BC.

Evidence discovered below the Dead Sea suggests that there were significant droughts in the past.

On the ASOR Blog, Douglas Petrovich discusses some of his discoveries behind his theory that Hebrew is the language behind the world’s first alphabet. Alan Millard has written a response. You can get a 25% discount on Petrovich’s book with code PET25.

Israel’s Good Name recently went on a Bar Ilan U tour of the Old City and Ramat Rahel.

The latest issue of Biblical Archaeology Review has articles on the Arch of Titus, Magdala, and three more biblical people confirmed by archaeological evidence.

Divers in Italy have begun the search for a third pleasure barge of Emperor Caligula.

The site of Humayma in southern Jordan was probably founded by the Nabatean king Aretas IV early in the first century AD.

“War and Storm: Treasures of the Sea Around Sicily” is a special exhibit of recovered antiquities at Glyptotek in Copenhagen.

John the Baptist would feel right at home at a Mariners’ game with their new menu offering of toasted grasshoppers.

Tonight National Geographic TV is airing its special on the opening of the traditional tomb of Jesus in the Church of the Holy Sepulcher. The episode is scheduled for 10 pm Eastern. This story from October has some of the details and images that will likely appear in the show.