Archaeologists working in Egypt found the body of a child buried together with 142 dogs, most of them puppies who apparently died in a flood.

A copy of the Book of the Dead was recently discovered in Egypt.

“Archaeologists have uncovered a 4,300-year-old mummy wrapped entirely in gold near the Step Pyramids – and it could be the oldest ever found.”

“Egyptian archaeologists announced Wednesday the discovery of the first burial site in the city of Luxor that dates back to the ancient Egyptian 13th Dynasty.” They also discovered a Roman city located near the Luxor Temple.

“Egypt has completed the restoration of 37 columns as part of the Karnak Temples’ Great Hypostyle Hall restoration project.”

Egyptian archaeologists are now engaged in 50 archaeological excavations around the country. This is a shift from previous reliance on foreign expeditions.

Egyptian archaeologist and filmmaker Ramy Romany discusses his fascinating life in an interview with Jordan Harbinger.

The Glyptotek Museum in Copenhagen is showing a special exhibition entitled “Amarna – City of the Sun God” from January 26 to June 18.

An 11-minute video explains why Tyrian purple dye is so hard to make and so expensive.

Valerie Abrahamsen looks at how the worship of the Egyptian god Isis influenced the veneration of Mary in the early Christian eras.

Catherine E. Pratt considers the centrality of oil and wine to the people of Greece through the ages.

“A sword in Chicago’s Field Museum that was previously thought to be a replica has been revealed to be an actual Bronze Age sword from between 1080 and 900 B.C.”

Archaeologists have now finished a chronological mapping of Megiddo, with radiocarbon dates for the two dozen layers of habitation from the Early Bronze Age to the end of Iron II.

Archaeologists excavating a deep rock-hewn moat along the northern side of Jerusalem’s Old City walls have discovered a handprint carved into the stone.

Not all scholars agree that the name of David is on the Mesha Stele.

The Technion and the University of Haifa’s School of Archaeology and Maritime Cultures have launched a joint initiative to support cooperation between the two institutions in archaeological sciences, especially microarchaeological research.

“Benjamin Netanyahu reportedly promised King Abdullah II that the status quo on the Temple Mount in Jerusalem will be preserved.”

“Jerusalem’s Tower of David was never built to be accessible.” The Times of Israel gives the backstory on the ingenuity required to make the ancient fortress accessible to those with disabilities.

The Mardigian Museum has opened in Jerusalem’s Armenian Quarter, documenting the community’s history and serving as a memorial to the Armenian Genocide.

“A riveting new exhibition, titled ‘Peace and War: The Assyrian Conquest of Lachish,’ will open on January 30 in the Lynn H. Wood Archaeology Museum on Southern Adventist University’s campus.” I’m not sure how much “peace” was involved in the Assyrian conquest.

Excavations at ancient Capitolias, a city of the Decapolis in modern Jordan, are shedding light on the production of glass in the Roman, Byzantine, and Umayyad periods.

A former director of the Citadel Museum in Amman, Jordan, was convicted of stealing 6,000 ancient coins and replacing them with forgeries.

Oded Lipschits will be giving a series of lectures in the UK in honor of the Anglo-Israel Archaeological Society’s Diamond Jubilee between February 20 and March 6. One of them will be online: “New Light on Jerusalem and its Surroundings during the Reign of King Manasseh,” on March 2. Registration required.

Nathan Steinmeyer gives advice on finding the right archaeological dig to join. This is also the topic of an OnScript Biblical World podcast with Steinmeyer, Chris McKinny, and Kyle Keimer. 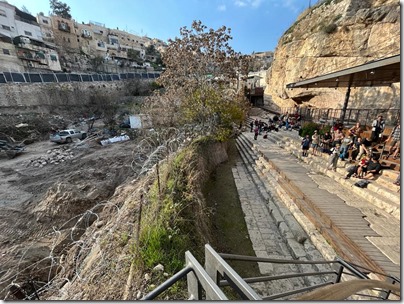 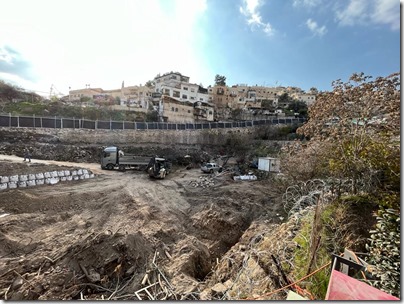 Excavations at the Pool of Siloam this week; photos by John Black

“An archaeological dig in Nimrud, Iraq revealed an enormous palace door that belonged to the Assyrian King Adad-Nirari III during his rule from 810-783 BCE.”

Egyptian archaeologists working in the Fayoum area have discovered the first full-color portraits of mummies found in the last hundred years.

Fine jewelry from 1400 BC has been found on a young Egyptian woman buried in the Tombs of the Nobles at Amarna.

Virginia Verardi describes evidence discovered at a site in Syria that seems to have been a concealed murder.

Smithsonian Magazine addresses the question of who owns antiquities discovered in Egypt but now in museums in Europe and the US.

“Ancient Yemen: Incense, Art, and Trade” is a new exhibit at the Smithsonian that focuses on the area’s golden age in the Greco-Roman era.

“Saudi Arabia has announced the registration of 67 new archaeological and historical sites.”

Zahi Hawass will be going on a “Grand Lecture Tour” of a couple dozen US cities in May and June ($79 and up).

Jordan is planning to spend $100 million to develop the baptismal site at the Jordan River, including construction of a biblical village, restaurants, a museum, and “opportunities for pilgrims to have special quiet spiritual time.”

I’ll be back with part 3 of the weekend roundup tomorrow.

“Archeologists in Egypt have uncovered a vast underground tunnel near the city of Alexandria, and hope it may lead them to the long-lost tomb of Egypt’s last pharaoh and possibly its most famous ruler, Queen Cleopatra VII.”

The Temple of Apollo in Side, Turkey, will be restored as an archaeological museum.

Turkish Archaeological News has a roundup of stories from the month of October, including a report of a well-preserved Byzantine shops and dining area in Ephesus.

The International Herodotus Workshop was held recently in the city of Bodrum, ancient Halicarnassus, the historian’s hometown.

Digital Maps of the Ancient World: “The aim is to map out all the different aspects of Roman cities so that it can be used as a teaching aid or a guide for those interested in the site.”

“A giant cardboard imitation of the Trojan Horse, which won Greeks the war of Troy in antiquity, broke the Guinness World Record for the world’s largest cardboard sculpture in U.K.”

“An American man has returned 19 antiquities to the four countries they came from after reading reports in the Guardian about the repatriation of looted antiquities.”

The Immersive King Tut exhibit is at, or coming to, a dozen US cities.

“Tutankhamun: His Tomb and his Treasures” will open at the Columbus Science Museum on March 18.

On The Book and the Spade, Charles Aling and Gordon Govier discuss King Tut’s Tomb on the 100th anniversary of its discovery.

Leon Mauldin shares a recent photo he took of the Merneptah Stele in the Egyptian Museum.

The University of Pennsylvania, in partnership with an Iraqi team, has announced the discovery of seven very fine wall reliefs from the time of King Sennacherib in Nineveh. The team is also actively reconstructing the ancient city’s Mashki Gate, which was destroyed by militants a few years ago.

“An ancient Christian monastery possibly dating as far back as the years before Islam spread across the Arabian Peninsula has been discovered on an island off the coast of the United Arab Emirates.”

Archaeological work is underway near the Church of St. Peter in Antioch on the Orontes.

The fourth of five excavation seasons at Amphipolis has concluded, and this story summarizes the latest discoveries.

“An intact skeleton of a woman lying next to a stunning necklace and other important artifacts from the Early Minoan era (circa 2,600 BC), were unearthed recently at the archaeological site of Sisi on Crete.”

“Archivists have uncovered a long-lost historical relic hidden underneath a Christian manuscript: the earliest known map of the stars.”

“We, a group of Egyptologists, IT scholars and enthusiasts, have started an initiative to promote the digitization of Egyptian texts as open, re-usable data. Inspired by the great ORACC, we call ourselves ORAEC, Open Richly Annotated Egyptian Corpus.”

Brent Nongbri reviews the new exhibition at the Cheater Beatty Library called “First Fragments: Biblical Papyrus from Roman Egypt.” It looks worth adding Ireland to your travel list for 2023.

John DeLancey has posted a 360 Interactive Video in the Colosseum in Rome. It provides a great perspective of this ancient slaughterhouse.

The Greek Reporter lists the top 20 archaeological sites in the country. It is a good list.

Ferrell Jenkins posts a photo of the Appian Way south of Rome.

Egyptian archaeologists do not often find a complete sarcophagus in its original tomb, but they did recently while National Geographic cameras were rolling. The tomb of Ramses II’s treasurer was discovered at Saqqara at the bottom of a 25-foot shaft that was filled with sand.

“Hieroglyphics: Unlocking Ancient Egypt” is a new exhibition at the British Museum.

“The mode of writing used in Ancient South Arabia, the legendary realm of the Queen of Sheba, was especially unique. The Sabaeans and their neighbours did not write on common materials such as leather or papyrus but rather on something surprisingly simple: branches of fresh wood just cut off the tree.”

Zoom lecture on Oct 11: “The Jordan Museum: More Than 10,000 Years of Human Resilience and Innovation,” by Ihab Amarin.

Excavation work on the Sardis synagogue is complete after 60 years, and all major finds will be displayed in the Manisa Museum.

Turkish Archaeological News has a roundup of stories for September.

A statue of Hercules from the 2nd century AD has been discovered in excavations at Philippi.

Mercenaries were an important part of Greek armies in the 5th century BC, a fact ancient Greek historians fail to mention.

“Archaeologists are using Apple’s iPad Pro to gather data, analyze objects, create a database and come to conclusions about the ancient site of Pompeii.”

“Entertainment among the Romans” is a new exhibition at the Lugdunum Museum in Lyon, France.