Hezekiah’s Pool is now clean, for the first time in decades if not centuries. Tom Powers gives the report and includes many photos. He suggests that the workers found a paved or plastered floor.

Biblical Archaeology Society has a brand spanking new blog that includes an RSS feed and welcomes readers with a new 140-page ebook entitled the “Ten Top Biblical Archaeology Discoveries.” The new site also allows readers (upon sign-in) to control which email subscriptions they receive. The blog is part of a complete re-design of the BAS website.

Olof Pedersén has posted his list of ANE Placemarks for Google Earth.

Foreign Policy has posted a photo essay entitled, “Once Upon a Time in Damascus.” More than a dozen photos from the American Colony/Eric Matson collection are featured.

The work of Gustaf Dalman is being celebrated in a program to be held at the Austrian Hospice in Jerusalem on August 18-19. I’ve been working on publishing a Dalman project myself but I will not be finished in time for the 70th anniversary of his death.

Restoration work is scheduled to be restarted at the Stepped Pyramid of Djoser (Zoser) at Saqqara (with photo). The article notes that already a second successor to Zahi Hawass is in office.

The Pantheon in Rome may have been built as a massive sundial.

In recent weeks, Wayne Stiles has visited En Gedi and the Church of the Holy Sepulcher.

Share:
Taita was the ruler of a Syrian kingdom in the Iron Age II. His name appears in Hieroglyphic Luwian inscriptions found at Shaizar and Muhradah, Syria (adjoining towns on the Orontes River, about 13 miles northwest of Hamah) and in a Hieroglyphic Luwian inscription from the Storm-god temple found on the citadel of Aleppo, Syria. (A pdf guidebook by Julia Gonnella entitled The Citadel of Aleppo: Description, History, Site Plan and Visitor Tour, 2nd ed. [2008] can be downloaded for free here. Pages 8-9 and 37-38 show the location of the Storm-god temple and give a brief description.)

In the inscriptions Taita is said to be the “Walastinean hero/king” or “Palastinean hero/king.” This title also appears in Hieroglyphic Luwian inscriptions found at Tell Tayinat, in the Amuq Plain in Turkey. It has been suggested that Tell Tayinat was the capital of Taita’s kingdom and that it extended east to Aleppo and south to Hamath. See most recently J. David Hawkins, “Cilicia, the Amuq, and Aleppo: New Light in a Dark Age,” Near Eastern Archaeology 72/4 (2009): 164-173. 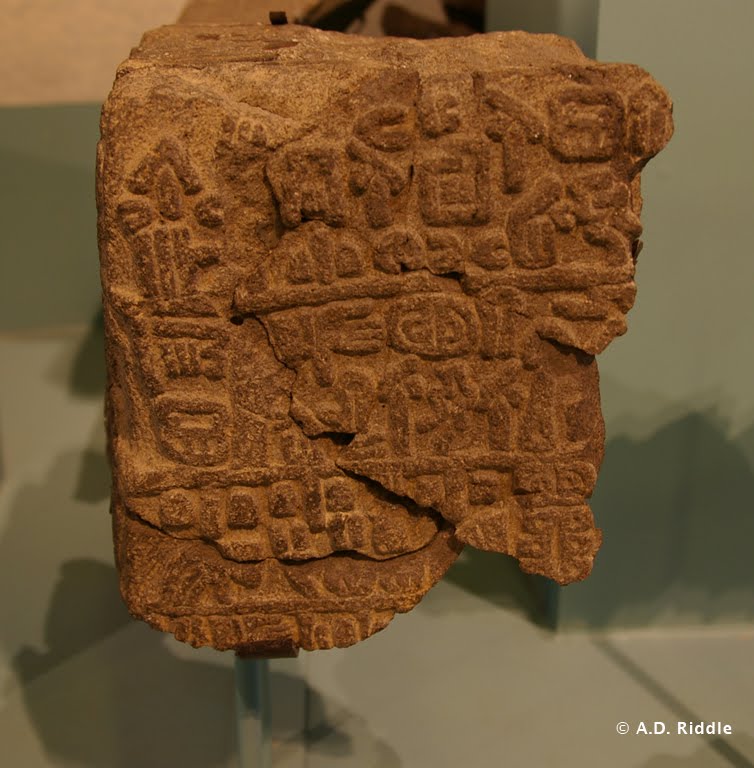 Fragment of a Hieroglyphic Luwian inscription from Tell Tayinat which mentions the “Walastinean king.” On display at the Oriental Institute Museum, Chicago.

The Luwian language is closely related to Hittite, Lycian, and other Anatolian languages. Luwian was written in both a cuneiform script and a hieroglyphic script, no relation to Egyptian hieroglyphs. Hieroglyphic Luwian was used by kings of the Hittite Empire for monumental inscriptions and seals.

Returning to Taita, Charles Steitler recently published an article in which he proposed Taita is To‘î, a king who paid tribute to David after David defeated Hadadezer, king of Zobah (2 Sam 8:9-11; 1 Chr. 18:9-11). To‘î is a Hurrian name, and Steitler argues Taita is also a Hurrian name. There is a -ta element in Taita’s name which does not appear in the name To‘î. Steitler is not able to give a definitive explanation for the significance of this element, and thus, we cannot say why it would have dropped out. (Steitler’s article is entitled “The Biblical King Toi of Hamath and the Late Hittite State of ‘P/Walas(a)tin,’ ” Biblische Notizen 146 [2010]: 81-99. It was noted by several blogs beginning I think with Aren Maeir.) There is also the difficulty of dating Taita’s inscriptions. In CHLI, Hawkins said the dating of Taita’s inscriptions was doubtful, but suggested the period 900-700 B.C. In the 2009 article I mentioned previously above the photo, Hawkins now suggests a possible date between the 11th and 10th centuries B.C. So it is hard to know right now if Taita was King To‘î of the Bible.

Benjamin Sass has now written two pieces, one here and more recently, “Four Notes on Taita King of Palistin with an Excursus on King Solomon’s Empire,” Tel Aviv 37 (2010): 169–174. He suggests dating Taita to around 900 B.C. for the main reason that, for Sass, this paints a more satisfying historical picture.

Last month, Brian Janeway contributed a summary of these findings as well. It can be read here.

If these recent discussions are any indication, we can expect that Hieroglyphic Luwian inscriptions will more-and-more play a significant role in our reconstructions of the early Iron Ages. Kenneth Kitchen has already written a couple of essays in which he shows how these inscriptions are an important source of new information for understanding King David’s kingdom.

And this is for that last reader who is not yet bored to tears. For more reading, probably the best place to start is Near Eastern Archaeology 72/4 (2009). The entire issue is dedicated to Taita, Tell Tayinat, and the Aleppo Storm-god temple. For more information on Luwians and the Luwian language, one might pursue:

This isn’t exactly breaking news, but I did not find any other blogs that had written about it, and it seems worthy of mention.

Back in September 2007, Turkish Daily News (now known as The Hürriyet Daily News and Economic Review) reported that operations to clear the land mines near the site of Carchemish had commenced. At the time, it was estimated the clean-up would take about one-and-a-half years. Todd mentioned it here.

As a follow-up to this story, it was reported last December in Today’s Zaman that the mines had been cleared and the land was now in the process of being turned over to the city. After bidding for the mine-clearing project, work actually commenced in March 2010. Three hundred days later, it was complete. Mine-sniffing dogs were used in the initial stages, and to avoid damaging antiquities, the mines were removed to another location for detonation (usually, mines are detonated on the spot). Now that the mines have been cleared, archaeologists will begin “serious and long-term” excavations, which it is hoped will attract tourism.

The site of ancient Carchemish is cut by the modern Turkey-Syria border. The citadel and inner town are located within Turkey, but most of the outer town is located in Syria. On the Turkish side is the modern village of Karkamiş and on the Syrian side is the village of Jerablus. As part of Turkey’s attempts to open up trade with its neighbors, plans are underway to open three new border crossings with Syria by 2012, one of which will be located at Karkamiş. 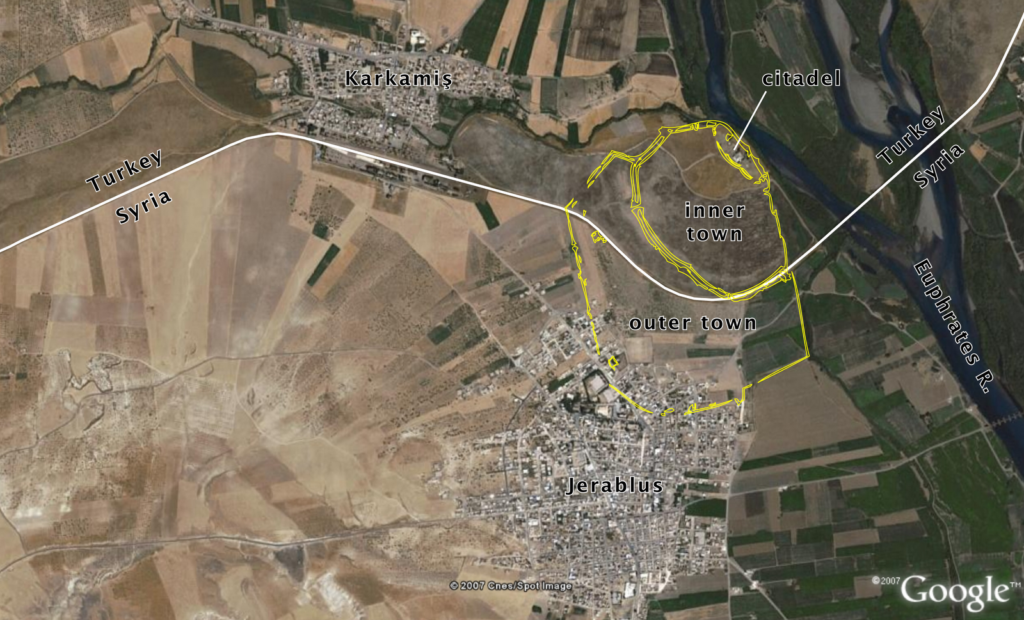 For an account of the earlier excavations conducted by Sir Leonard Woolley, see here.

Carchemish from the northwest, view of citadel and inner town wall. 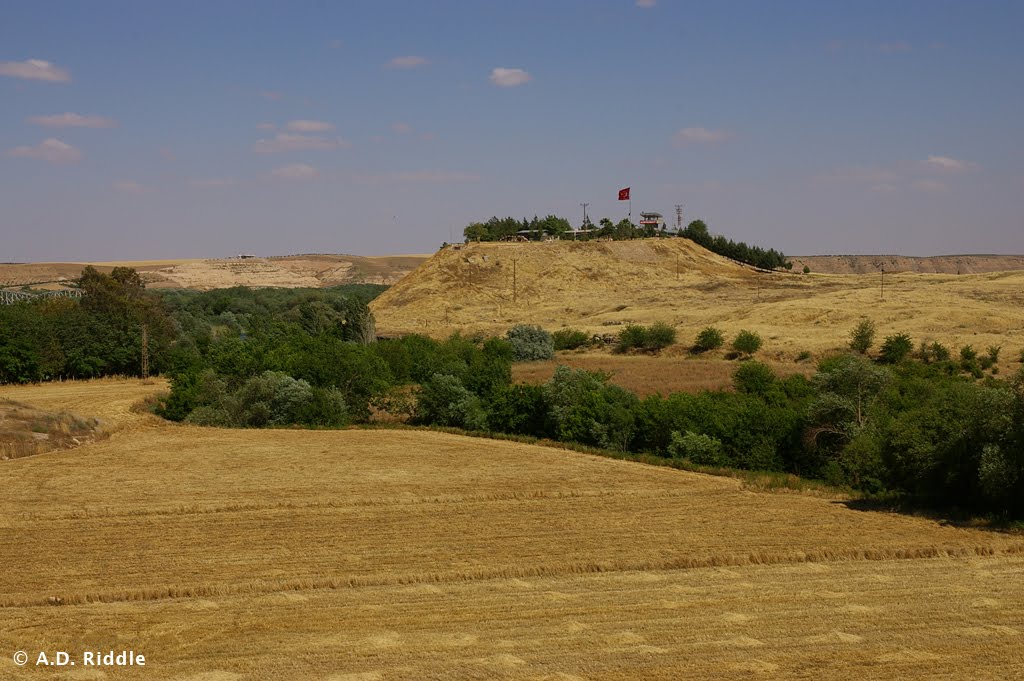 Carchemish citadel from the northwest.

Construction of a new parking lot underneath the Jewish Quarter was reported to require the first breach of the Old City walls of Jerusalem in more than a hundred years.  Well, not quite.  First, the architect clarified that he was only going under the walls and not through them.  Then Leen Ritmeyer explained that the walls were not breached a hundred years ago for Kaiser Wilhelm II’s visit.  The walls are safe, for now.

A program on the “New Finds in Jaffa Gate” will be held on Oct 12, 2010, 6-8 pm at Jerusalem’s Yad Ben Zvi Institute.  Ofer Sion and Shahar Poni will lecture on the discoveries, including the channel leading to Hezekiah’s Pool.  The lecture notice (in Hebrew) can be found here and here (pdf).

A statue of Hathor disappeared from a temple at Serabit el-Khadim and was discovered in the Sinai desert five days later.  Authorities are questioning the site’s security guards.

Following Friday’s report that the Syrian army has a Scud missile base near Damascus, Jay Baggett (Land of the Bible) created a flyover tour to the “hidden” base where the missiles can be easily seen on Google Earth.

Steven Lancaster and James Monson have completed the Geobasics Study Guide, an outstanding and unique work that deserves a post of its own.  In the meantime, you can get a copy for yourself.  The guide is in pdf format and is free.  The accompanying map book is (only) $15.

From the Syrian Arab News Agency:

Hama, central Syria, (SANA) –The national Archeological expedition found a unique reddish brown mosaic with a length of 4.8 meters and a width of 3 meters in addition to several coins dating back to the 1st century AD.
Head of Hama Antiquities Department Abdul Qader Farzat said the mosaic was uncovered in Chamber No. 5 Acriba Bath inside Apamea which is six meters long, five meters wide and 4 meters high.
Farzat pointed out that the expedition worked mainly on the western corridor of the bath which is 11 meters long where clay dishes dating back to Byzantine Age were found in addition to a wall upon which a clay canal was found.

The full article is here.