"No Room in the Inn"

In the typical Christmas pageant, one of the children will be cast as the heartless innkeeper who refuses lodging to Joseph and pregnant Mary.  Most know that there is no innkeeper mentioned in the Bible, but fewer are aware that there is not even an inn described.  The view that Joseph and Mary simply arrived late to Bethlehem and accommodations at the local hotel were full is incorrect.  The word translated as “inn” is the word kataluma, which is used elsewhere by Luke and translated as “guest chamber” or “upper room” (Luke 22:11; cf. Mark 14:14).  When Luke wants to speak of a paid establishment (i.e., an inn), he uses a different Greek word, pandocheion, as in the story of the Good Samaritan (Luke 10:34).  Unfortunately, of the dozens of English translations that I’ve checked, all translate kataluma as “inn” in Luke 2:7 and not as “guest room” (that includes the recent ESV and NET; apparently they are unwilling to buck tradition in favor of accuracy).

The result of this mistranslation leads to a different understanding of the story.  It’s not that Joseph and Mary were late to town, but it’s that they were rejected by their family.  Clearly they had family members in town, as that was the reason they returned to Bethlehem for the census.  That there was no room in the guest chamber for a pregnant woman indicates that they chose not to make room for this unwedded mother.  The birth of Jesus in a room where animals lived suggests shame and 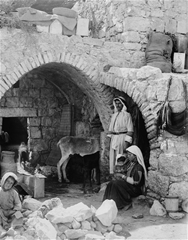 Most of what I have described above is the general view of scholars and I find it compelling.  But some scholars err in arguing that Bethlehem could not have had an inn.  This view has been repeated enough for me to address it.  Ben Witherington, for instance, says this:

It can be doubted whether there would have been an inn in Bethlehem in Jesus’ day since it was not on any major road, and inns normally were found only on major roads, especially the Roman ones (Dictionary of Jesus and the Gospels, p. 69).

I’m not sure what qualifies as a “major trade route,” but if there was any trade route in the hill country of Judea, Bethlehem was on it.  The only way you can say that there was no “major road” near Bethlehem is by saying that there were no major roads in the hill country.  But were there no travelers in this area, and were there no traders bringing supplies to Judea and Samaria?  Certainly there were.

An understanding of the topography of the hill country will help here.  The Judean hills are very rugged as they are divided by deep wadis (canyons) on the eastern and western slopes.  Consequently, travelers have always preferred to stay on ridges, to avoid frequent ascents and descents.  For this reason, travelers have moved along the watershed ridge, from the time of Abraham until the present.

About a decade ago, Israel decided that for political reasons they needed to build an alternate road to bypass the Arab population of Bethlehem.  They built a road less than 2 miles to the west of the watershed ridge.  Even such a small deviation required that they spend millions of dollars in the construction of tunnels and bridges.  Today we can do it; in ancient times, they did not.  In short, there can be no doubt that historically any north-south traffic in the hill country passed near to the town of Bethlehem (cf. Anchor Bible Dictionary 5:783). 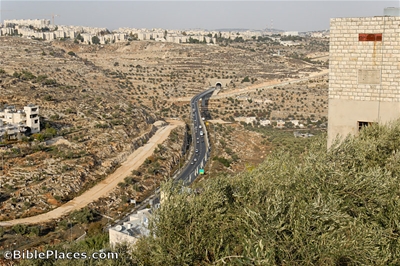 Modern Israeli road that bypasses Bethlehem, with bridge and tunnel

Furthermore, the argument that Bethlehem is too close to Jerusalem to warrant an inn presupposes that all travelers left from the same point and had the same destination.  Jerusalem may have been a major destination of travelers in the hill country, but it was not the only destination.  Travelers could have been going to and from countless villages in the hill country.  Some known settlements in the 1st century B.C./A.D. include Hebron, Gabath Saul, Ephraim, Gophna, Sychar, Sebaste.  That travelers might stop at any point along the major north-south hill country route is illustrated well by the story of the Levite and his concubine in Judges 19.

In the end, the argument that there was no inn in Bethlehem in the time of Jesus falls short.  Luke, however, says nothing about an inn.