For the 40th anniversary of Jerusalem as a united city under Israeli control, the Jerusalem Post has a reflective article on the changes in the Jewish Quarter of the Old City during these four decades.

What once was a place for cheap rent has become the most expensive real estate in the city, with an apartment selling recently for $5 million.  The article includes interviews with some who have witnessed the dramatic changes.  An excerpt:

In addition to new buildings and archeological finds, the rebuilt quarter needed residents. “It was difficult to bring people to live here after ’67,” explains Arzy. “At the beginning of the period, the director decided that if someone from the US wanted to buy a house here, we wouldn’t sell it. There was a fear that Jews wouldn’t come here, that foreigners would buy up all the property and there wouldn’t be Jewish residents here.”
Real estate in the Jewish Quarter includes some of the most desirable properties in the world; rentals and property for sale are known to be available only for hours at the most, not days, weeks or months. The JQDC officially owns the entire quarter and those who buy property technically lease it for only 49 years. In keeping with the original 1967 decision, only Israeli citizens may purchase real estate, and all purchases, rentals or transfers must be approved by the JQDC.
“The population has changed from the beginning,” says Arzy. “Once, there were very few haredim; there were more religious Zionists and secular residents. Little by little more haredi families moved in and then in a certain period, in the 1990s, a lot of haredi immigrants came from America.”
Today, there are 600 families, or about 2,500 Jewish residents, out of 34,700 total residents in the Old City.
“But at the beginning of the 20th century, there were 20,000 Jewish residents, out of 37,000 total. That means, back then it was mostly Jewish in the Old City, and not just in the Jewish Quarter,” he adds.
Arzy is reluctant to talk about property values today. “I can say it’s a pity that I didn’t buy here, because today the prices are astronomical. To my knowledge it’s the most expensive real estate in Jerusalem. An apartment I know, a house opposite the Western Wall, was sold recently for $5 million.” 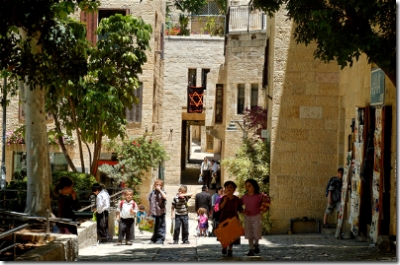