A 70-meter-long segment of Jerusalem’s central drain dating from the Second Temple period was discovered Sunday by the Israel Antiquities Authority.
The segment is located between the Temple Mount and the Pool of Siloam. It apparently was part of a long drain that spanned from the Western Wall to the Kidron River, near the Dead Sea.
The drain stretched underneath the Old City’s main street, and cleared rainwater from the areas now known as the Jewish Quarter and the western section of City of David, as well as the Temple Mount, before the city’s destruction at the hands of the Romans in 70 C.E.
The excavation, conducted by the Antiquities Authority in conjunction with City of David Foundation, also found shards and coins from the period. The drain is made of massive slabs of stone, and is about three meters high and one meter wide.
The archeologists professors Roni Reich of the University of Haifa and Eli Shukrun from the Antiquities Authority, who are in charge of the excavation, say that the land that accumulated during 2000 years of landslides required them to dig 10 meters deep in order to reach ancient Jerusalem’s main street.
“According to Josephus, the historian who recorded the siege, occupation and destruction of Jerusalem, people found refuge in the drain until they managed to escape through the city’s southern gate,” they said.
The northern segment of the drain,  which is yet to be dug up, is believed to reach the Western Wall area, where another major drain was previously found. The archeologists assume that they are both part of the same drain.

Drains have been found in Jerusalem before, including other segments of this same drain.  But if the word “drain” doesn’t excite you, it may be because you missed the size of what they found.  The drain they uncovered was 70 meters (220 ft) long, 3 meters (10 ft) high and 1 meter (3 ft) wide.

The article doesn’t state exactly where the drain is located, but Reich and Shukrun have excavated in two areas in recent years that are possibilities.  I think location B, depicted on the aerial photo, is more likely.  Earlier excavations and photos of this area were included in the February issue of the BiblePlaces Newsletter (not online, but see Leen Ritmeyer’s blog for a photo from it). 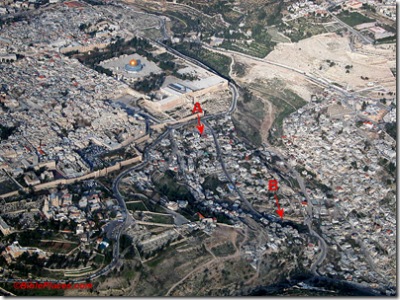 UPDATE: The AP article includes a photograph of the channel (HT: Joseph Lauer).  Very impressive.  The masonry on that drain is better than the masonry of most people’s houses in Jerusalem today.
UPDATE (9/10): Some of the artifacts found in the excavation are displayed in this photograph.
UPDATE (9/11): The Israel Antiquities Authority has issued a press release.
Share: