Khirbet Qeiyafa in the NY Times

The New York Times has an article in tomorrow’s print edition about Khirbet Qeiyafa (with thanks to Joe Lauer for pointing it out).  The article appears to me to be a teaser, released on the same day of the excavator’s lecture in Jerusalem, which likely will include some new revelations.  The article quotes a number of archaeologists, but most of the information is already known to those who have followed the excavation here or elsewhere.  I’m going to comment on some portions of the article, but you’ll do best the read the article in its entirety first, and then read my comments.

Five lines on pottery uncovered here appear to be the oldest Hebrew text ever found and are likely to have a major impact on knowledge about the history of literacy and alphabet development.

This is a dramatic statement, but the rest of the article ignores the inscription.  The “competition” for the earliest Hebrew text would be the Izbet Sartah inscription (11th century), the Gezer Calendar (10th century), and the Tel Zayit Inscription (10th century).  Interestingly, all of these inscriptions are from the same general vicinity (the western foothills, aka Shephelah).

A great power [like that described of David and Solomon], they note, would have left traces of cities and activity, and been mentioned by those around it. Yet in this area nothing like that has turned up — at least until now.

Hold on here.  Gezer is only a few miles up the road, and the excavations there were pretty decisive that it was a well-fortified city in the time of Solomon.  This is an example of trying to make the site more important by denigrating the significance of others.

Another reason this site holds such promise is that it was in use for only a short period, perhaps 20 years, and then destroyed — Mr. Garfinkel speculates in a battle with the Philistines — and abandoned for centuries, sealing the finds in Pompeii-like uniformity.

This is very important.  The problem with other sites is that they may be used for a long period of time, making it difficult to distinguish exactly what was going on at an earlier point it is history.  For that reason, archaeologists love destructions.  Even better is a single period site with a relatively short-lived occupation.

“The fortification required 200,000 tons of stone and probably 10 years to build,” he said as he walked around the site one recent morning. “There were 500 people inside. This was the main road to Jerusalem, the key strategic site to protect the kingdom of Jerusalem. If they built a fortification here, it was a real kingdom, pointing to urban cities and a centralized authority in Judah in the 10th century B.C.”

These are some numbers that I had not seen before.  It does seem strange that a fortress that took 10 years to build would only be in use for 20 years.  Why was it not rebuilt?  Was it because it was captured by the Philistines?  Or was it because David’s kingdom was strong enough (and its border now further away) that this fortress was no longer necessary?

“This is an important site, one of the very few cases from the 10th century where you can see a settlement fortified in a style that is typical of later Israelite and Judean cities,” said Amihai Mazar, a professor of archaeology at Hebrew University. “The question is who fortified it, who lived in it, why it was abandoned and how it all relates to the reign of David and Solomon.”

Mazar certainly asks the key questions.  It’s important to remember that many of these things are interpretive, which means that an archaeologist can interpret the finds one way and another archaeologist can come to a different (even opposite) conclusion.  If only the stones could speak.

The Philistines had a huge city, Gath, some seven miles away, but pottery found there looks distinct from what Mr. Garfinkel has found here.

This suggests that Qeiyafa was an Israelite fort.  That’s a real question because the Shephelah at this time was contested by the Philistines and Israelites.

Seymour Gitin, an archaeologist and a director of the Albright Institute in Jerusalem, a private American institution, who has seen the finds, said: “The real value is that there was an urban center in the 10th century. You can extrapolate and say this helps support a kingdom, a united monarchy under David and Solomon. People will rightly use this material to support that.”

What Gitin is saying is that a fortress like this doesn’t come out of nowhere.  There must be some sort of strong organizing force (government) that financed and directed it.  This compound wasn’t built by three bored Israelites one Sunday afternoon.

“Some of us look at things in a very ethnocentric way — everything is Israelite or Judahite,” [Israel Finkelstein] said. “History is not like that. There were other entities playing a big role in the southern part of the country. And even if it belongs to Jerusalem, fine. So there is a late 10th-century fortified structure there. I don’t believe that any archaeologist can revolutionize our entire understanding of Judah and Jerusalem by a single site. It doesn’t work that way. This is a cumulative discipline.”

Whoops!  Look at how quickly Finkelstein re-dated the whole enterprise by approximately a century.

Earlier in the article the fortress is dated to 1050-970 B.C.  Finkelstein makes it late 10th-century with a wave of his hand.  This is not accidental, as his recent publications are built upon the theory that the biblical history was written very late and is entirely unreliable.  Any discovery which suggests a strong central government in Judah in the 10th century is very inconvenient for his views.

He [Garfinkel] says with some 96 percent of this site still to be unearthed, a process likely to take 10 years, he hopes that more writing, more olive pits and more pottery will be uncovered, and add depth to what he believes is a revolutionary find.

Most critical in the whole discussion is this note of caution.  Too often absolute and sensational conclusions are made after the first discoveries.  We have time.  Any discoveries heralded now, of course, certainly makes recruiting slave labor volunteers much easier. 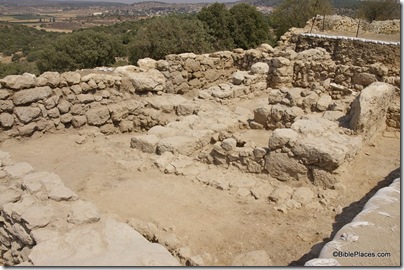 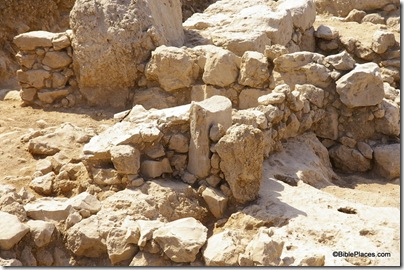 2 thoughts on “Khirbet Qeiyafa in the NY Times”