Haaretz reports on a battle between an Old City shopkeeper and the Coptic monks of the Church of the Holy Sepulcher.

In the next few weeks, between making decisions about the deal for captive soldier Gilad Shalit, the settlement freeze and renewal of negotiations with the Palestinian Authority, Prime Minister Benjamin Netanyahu will have to make another fateful decision: Is the cellar beneath Abed Hirbawi’s East Jerusalem shop holy ground?
The decision will supposedly put an end to a strange, 13-year-old affair. Hirbawi and his landlord, Abdullah Buderi, claim the basement belongs to their shop, and that Coptic monks have invaded it. The Coptic Church says it was Muslims who invaded the cellar, which used to be a sanctuary belonging to the Church of the Holy Sepulchre in the Old City.
Both sides have submitted a wealth of documents to the courts – and to a lawyer, on behalf of the prime minister. The documents include an order from Muslim general Saladin, sharia court rulings from the late Middle Ages, ancient maps, Turkish deeds of ownership, scientific articles and sworn declarations from Israeli experts on archaeology, theology and history.
Hirbawi, a well-known businessman, relates that in July 1996, he heard noises beneath his shop. When he peeked though the floor, he saw several dozen monks digging under his feet. According to associates of Mutran Anba Abra’am, the metropolitan of the Coptic Church in Jerusalem, they were innocently carrying out work in the church-cellar when Hirbawi and others attacked them with knives, injuring a monk.
[. . .]
Yehoshua says the cellar served as a quarry during both the First and Second Temple periods, but during the latter, some of it was used as a burial cave. A structure was built on top by the Crusaders in the Middle Ages, and subsequently a plant for grinding sesame seeds was erected on the premises, which dumped its waste into the cellar.
These were all secular uses, emphasizes Yehoshua. The place was never used for ritual purposes and therefore cannot be considered holy. Moreover, according to the lawyer and his client, since the cellar had been filled with waste since the 12th century, it was not used at all – until the monks showed up under Hirbawi’s feet 800 years later.

In a follow-up to the previous posting on the IAA’s work on the western gate (“Mary’s Gate”) of the Church of the Holy Sepulcher, Craig Dunning sends along a few photos.

The first photo shows the gate at the beginning of the month.  Note the stone on the bottom right (with a blue stripe). 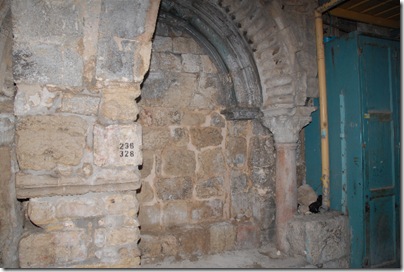 The photo below was taken last week and shows the area with construction work underway.  The stone shown above has been removed. 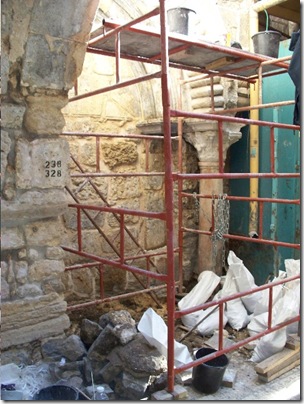 In this photo, you can see the stone being transported by the authorities. 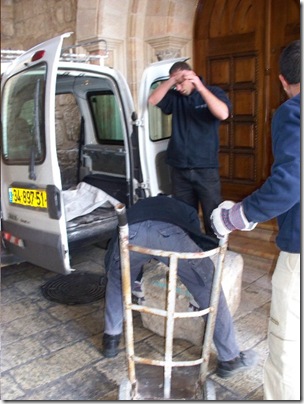 Evidence supporting the Jordanian official’s claim that the gate has been opened is lacking.