Israel is planning to build two new trails in conjunction with the restoration of 150 historic sites.  A number of sites on the list have been mentioned as in need of restoration here before, including Lachish, Hurvat Madras [Khirbet Midras], and the Sanhedrin Garden.  We’re a big fan of a number of other sites on the list as well, though we see less need for restoration on some than for others.

Sometimes government involvement makes things worse not better, a case in point being the new Arbel National Park.  Trails, however, are always good.

The government is planning on spending NIS 500 million ($135 million) over five years to restore and preserve heritage sites across the country.
[. . .]
Earlier this month, Prime Minister Benjamin Netanyahu devoted a large part of his address at the Herzliya Conference to outlining the plan.
“The guarantee of our existence is dependent not merely on weapons systems or military strength or economic strength or our innovativeness, our exports, and all these forces which are indeed so vital to us,” he said. “It is dependent first and foremost on the intellectual capacity and the national feelings that we inculcate – from parents to children, and as a state, in our educational system.”
Netanyahu said that he plans to present a blueprint to the government on February 25 that will include, among other things, the inauguration of two trails, in addition to the existing Israel National Trail (“Shvil Yisrael”).
One is an historical trail connecting dozens of archaeological sites, and the second is an “Israeli Experience” trail linking up over 100 places important to the nation’s more recent history and will include buildings that are to be preserved, settlement sites, small museums and memorials.
[. . .]
At Tel Lachish, which Netanyahu referred to in his speech, the plan is to restore the gate into the city and the city walls, to prepare trails, to build an entrance hall and to add signposts, among other things.
Other sites marked for restoration are Neot Kedumim, Susya, Qumran, Jason’s Tomb in the Rehavia neighborhood of Jerusalem, the Sanhedrin Garden, the Eshkolot Cave, Umm al-Amad, the Beit Shean antiquities, Tel Megiddo, Tiberias, Tel Arad, Tel Dan, Hurvat Madras, the park around the Old City of Jerusalem and the City of David.
There are another 109 heritage sites and projects earmarked for restoration and preservation. They are to be found throughout the country and include such sites as the Independence Hall in Tel Aviv, the Aronson farm and the signaling station at Atlit, the Emek train between Haifa and Tzemah and the Tzemah train station, the Old Courtyard Museum at Ein Shemer, the original homes of the settlers at Migdal in Ashkelon, the street of the Biluim and the winery in Gedera, the courtyard at Kinneret, the Montefoire [sic] quarter of Tel Aviv, the agricultural school at Mikveh Yisrael, the old Jerusalem train station and others.

You can read the article here. 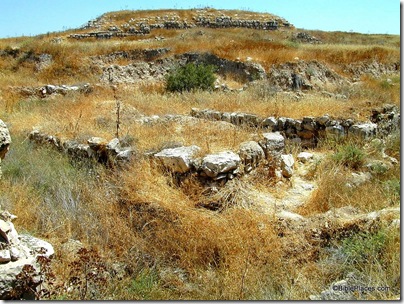 Lachish gate (foreground) and palace (top), in a state of neglect.  These buildings date to the late Iron Age, a time when Lachish was the second most important city in Judah (after Jerusalem).
Share:

One thought on “Two New Trails and 150 Restored Sites”