Orange Circle Studio has just published their 2011 Lands of the Bible Calendar featuring some of my favorite photos.  You have a chance to “Meet the Artist” in their recent blogpost.  I look forward to telling you more about this fantastic calendar in the coming weeks.

Aren Maeir has been dropping hints along the way but as the season wraps up, he is more certain.  He writes:

The first [photo] is a working view of the structure which I believe we can now firmly claim to be a temple! The structure, which has at its center two large pillar bases, and some of the exterior walls, had various cult related objects found in its vicinity.

The Jerusalem Post picks up the story and explains some of the biblical significance:

Prof. Aren Maeir, of Bar-Ilan University’s Martin (Szusz) Department of Land of Israel Studies and Archaeology, said on Wednesday that the temple may shed light on the architecture in Philistia at the time when Jewish hero Samson purportedly brought the temple of Dagon down upon himself.
Maier said the architecture of the Philistine temple, the first ever found at Gath, sheds light on what the temple of Dagon would have looked like, in particular the two pillars that anchored the center of the structure.

The story is also reported in Arutz-7.

How do they know that this is a temple and not a house or a shop?  If you’ve ever wondered how archaeologists make such determinations, I highly recommend that you read this morning’s brief post by Maeir in which he explains what they didn’t find as well as what they did.

Hundreds of women came out last night to celebrate the Tu B’Av (15th of Av) holiday on the biblical site of Shiloh in the Benjamin region, renewing an ancient tradition. For centuries, the young women of Shiloh would go out to the vineyards and orchards and dance on the joyous holiday of Tu B’Av. Last night, the women returned to the orchards in a multifaceted celebration of dance, organized by the Benjamin Regional Council.

The story of the women dancing is recorded in Judges 21.  There the women didn’t fare so well when they were carried off by surviving scoundrels from the tribe of Benjamin.

The full story and photos are here.

Have you ever thought that some ruler/king/president/official was just so evil that the Lord should strike him down?  Of course not.  But there was a king whose life was ended by God not long after Jesus’ crucifixion.  The book of Acts describes the failure of Agrippa I to give glory to God with the result that he was eaten by worms and died (Acts 12:20-23).

The New Testament records that the episode occurred in Caesarea, but Josephus is more specific and writes that Agrippa was in the theater.  For that reason, I’ve always read the story of Acts 12 with my students while in the theater.  Now, however, I think I was wrong.  Josephus, it seems to me, undermines his own presentation.

I make my case in an article posted this week at The Bible and Interpretation.  I’d be happy if you’d read it and note in the comments if you’re convinced or not.  As far as I know, no one has made these observations before.

Google is funding a project that will allow you to find books based on time and location.

A University of Southampton researcher is part of a team which has just secured funding from Google to make the classics and other ancient texts easy to discover and access online.
Leif Isaksen at the University’s School of Electronics and Computer Science (ECS) is working together with Dr Elton Barker at The Open University and Dr Eric Kansa of the University of California-Berkeley on the Google Ancient Places (GAP): Discovering historic geographical entities in the Google Books corpus project, which is one of 12 projects worldwide to receive funding as part of a new Digital Humanities Research Programme funded by Google.
The GAP researchers will enable scholars and enthusiasts worldwide to search the Google Books corpus to find books related to a geographic location and within a particular time period. The results can then be visualised on GoogleMaps or in GoogleEarth.

The full article is here.

The renewed campus of the Israel Museum was inaugurated yesterday, as reported in articles in the Jerusalem Post and Arutz-7.  I don’t like the idea that the amount of display space has doubled but fewer items are on display.

A report at Device Magazine has some additional details about the cuneiform fragments found at Hazor.  They date to the 18th-17th centuries and include the words “master,” “slave,” and possibly “tooth.”  It is not clear whether the tablet was written at Hazor or brought to the site from somewhere else.  The article (and a similar one at Arutz-7) includes photos.

The current excavations of Megiddo are profiled in this Jerusalem Post article.  The team had the privilege recently of hosting Lord and Lady Allenby.

The Galilean synagogue discovered this summer at Horvat Kur is the subject of a brief article published by the university excavating the site.

The Second Qumran Institute Symposium will be held October 21-22, 2010 at the University of Groningen in the Netherlands.  The subject is “The Jewish War agaist Rome (66-70/74): Interdisciplinary Perspectives.” Nearly all of the lectures are in English and most sound quite interesting.

Chris McKinny has posted some aerial photos of Tel Burna and labeled some of the observable features on the surface.  What a dream to have a site without later periods “in the way.”  Chris’s wife
Mindy has some nice photos of the recent excavation of Burna.

The excavations of a temple at Tel Tayinat in Turkey are profiled by the Ottawa Citizen.

A Brazilian mega-church is building a $200 million replica of Solomon’s temple, although unlike the original, this will seat 10,000 people.

A fire started by teenage hikers has destroyed 250 acres in the forested area west of Jerusalem, reports the Jerusalem Post.

Several teenagers were taken in for questioning in connection with a fire near the capital’s southwestern edge that destroyed 1,000 dunams (100 hectares) of forest, forced the partial evacuation of the moshavim of Ora, Aminadav and Even Sapir, and came close to doing the same for Hadassah University Hospital in Ein Kerem, Jerusalem police announced on Sunday night.
According to a police spokesman, students from a haredi school in the Jerusalem area were hiking near Ein Hamdak, inside the Aminadav Forest. Some of the students were apparently playing with fire and started the blaze, which got out of control. The group then allegedly left the scene and continued toward Jerusalem before being found by detectives from the Moriya District. 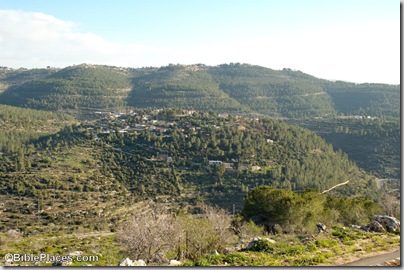 Even Sapir, one of the towns threatened

UPDATE (7/26): A resident of Even Sapir has written that this moshav was not evacuated, contrary to media reports.  The JPost article linked to above now reports that the first fire and a second one at Khirbet Sa’adim are both under control and evacuated residents are returning.

A couple of fragments of a cuneiform tablet were found recently at the excavations of Hazor.  Details released thus far are limited, but the tablet is from the Middle Bronze Age (2000-1500 BC) and has parallels to the Law Code of Hammurabi.  The excavators’ notice of the discovery is online here.  I have heard that the find was made on the surface, and that publication won’t take long.

Roman period tombs have been discovered in Petra with skeletal remains and ancient artifacts.

A small basalt statue dating from about 4000 BC has been found in Jordan near the border of Saudi Arabia.

Stephen Gabriel Rosenberg has written an “Archaeology in Israel Update,” including summaries of the medieval aqueduct in Jerusalem, graves in Ashkelon, MB artifacts near Jokneam, MB tombs in Nazareth, and the 18th anniversary of the Bible Lands Museum in Jerusalem.

New excavations begin today at Shiloh and the team is looking for volunteers (article in Hebrew).

If you prefer to “experience” excavations without getting dirty, take a look at the live video feed from Gath (during working hours only).

A new computer program has quickly deciphered a written language last used in Biblical times—possibly opening the door to "resurrecting" ancient texts that are no longer understood, scientists announced last week. Created by a team at the Massachusetts Institute of Technology, the program automatically translates written Ugaritic, which consists of dots and wedge-shaped stylus marks on clay tablets. The script was last used around 1200 B.C. in western Syria. […] "Traditionally, decipherment has been viewed as a sort of scholarly detective game, and computers weren’t thought to be of much use," study co-author and MIT computer science professor Regina Barzilay said in an email. "Our aim is to bring to bear the full power of modern machine learning and statistics to this problem." The next step should be to see whether the program can help crack the handful of ancient scripts that remain largely incomprehensible. Etruscan, for example, is a script that was used in northern and central Italy around 700 B.C. but was displaced by Latin by about A.D. 100. Few written examples of Etruscan survive, and the language has no known relations, so it continues to baffle archaeologists.

The full story is here and links to other stories can be found via Google.  The academic paper on which these stories are based is available at the MIT website (pdf).

In recent years Israel has been developing a southern baptism site on the Jordan River in the Jericho area.  The country of Jordan opened a counterpart on the eastern side nearly a decade ago.  But the poor quality of the water threatens to close the site before it officially opens.  From the Jerusalem Post:

The site where tradition holds Jesus was baptized is in danger of being declared off-limits to pilgrims because of pollution in the Jordan River.  Qasar al-Yahud, a few miles from where the biblical river spills into the Dead Sea, has drawn over 100,000 tourists each year, most of whom are Christian pilgrims who wish to undergo a baptism like their savior did 2,000 years ago — and in the very same spot. But drought and irrigation have turned the mighty lower Jordan River into a stagnant stream as it makes it way from the Sea of Galilee. The brook then swells with raw sewage as it passes nearby Jericho. Israeli health officials are reportedly considering erecting signs warning: “Polluted Waters. Entry Forbidden.” […] Neglected for decades, the name of the site is Arabic for “Castle of the Jews,” which is also the name of the 5th century monastery. But since 2007, Israel has tried to bring Christian tourists ‘down by the riverside’ and has invested about $2 million to develop the site in order to allow wheelchair accessibility, shade, baptismal decks and other facilities. Entry is free. There is a similar site close-by on the Jordanian side, but the west bank side is considered holier since that’s the side Jesus likely used. […] Despite the heath risks, the Nature and Parks Authority continues to move ahead with restoration efforts including plans to open the site to tourists without the need for coordination with the military.

The JPost article is accompanied by a photo, the caption of which reads, “Pilgrims dunk themselves in stagnant sewage.”  The photo, however, was taken at the northern site of Yardenit, where the water quality is good.