As Todd has noted previously, there are archaeological and chronological problems with identifying Tall el-Hammam with Sodom. Here are some scriptural/textual considerations. A main reason that a northern location is sought for Sodom is the belief that Gen. 13:10-12 places Sodom in the region of the “Plain (kikkar) of the Jordan” that is, north of the Dead Sea (Gen 13:10). However, I don’t think Gen. 13:10-12 restricts Sodom to the Kikkar of the Jordan. Yes, Lot chose the Kikkar of the Jordan and travelled east from the Hill Country. However, Genesis 13:11-12 implies passage of time during which Lot moved around. That Lot “pitched his tent as far as Sodom” suggests a geographical separation from the “Kikkar of the Jordan.” Also, the word kikkar does not exclusively refer only to the area of the Rift Valley just north of the Dead Sea. “Kikkar of the Jordan” can refer to the area as far north as Sukkoth (1 Kings 7:46). The word kikkar may be used to refer to other parts of the Rift Valley in general, especially when not accompanied by the appellation “of the Jordan” (Gen. 19:17, 28; 2 Sam. 18:23). In other words, Sodom could be in the kikkar, without being in the Kikkar of the Jordan.

In favor of a southern location, Scripture associates Sodom geographically with the “Valley of Siddim, which is the Salt Sea” an area distinct from the Kikkar of the Jordan (Gen. 14:3, 8, 10). The meaning of Siddim, “lime, whitewash” (LXX “salty”) and the pits in the region suggest a more southern location for Sodom. Also, locating Sodom and Gomorrah in the south fits better the post-destruction environment described by the prophets (Deut. 29:23, Isa. 13:19-20, Jer. 49:18, 50:40; Zeph. 2:9) and a later battle between Judah and Edom at the site of Zair (from the same Hebrew word as Zoar to which Lot fled, 2 Kings 8:21).

I believe we will always have problems trying to locate Sodom and Gomorrah. Besides significant geological/geographical changes to the region associated with the divine destruction (Gen. 13:10), the divine destruction probably didn’t leave much (any?) of the cities to be found. The Hebrew for these cities’ destruction is unique (a combination of shachet “destroy” and hafach, “turn upside down”). It is unlikely that any of these tells/ruins in the Rift (north or south) are Sodom or Gomorrah. More likely is that these ruins represent peripheral cities, perhaps one was Zoar, which were spared the divine judgment. 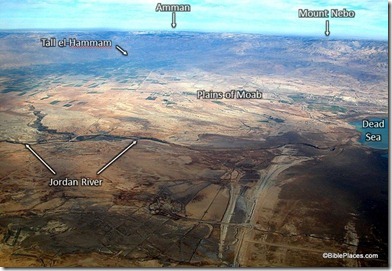 Plains of Moab and Tall el-Hammam from the west
Share:

PrevPreviousQ&A: Where is the Hinnom Valley in Jeremiah?
NextYour Take: Dever on Israel’s EmergenceNext