Record Rainfall in Galilee in January

Traveling around Galilee last month, it felt like there was just no dodging the rain. It turns out that that was more than a feeling, for the Israel Meteorological Service is reporting that rain fell on 29 out of 31 days in January. From Haaretz:

Measuring stations in Nahariyya and the Galilee registered a new record in the number of rainy days in a row, with rain falling for 27 days in a row, from January 5 to 31. The former record was held by the Druze village of Yarka, where rain fell for 23 days in a row in February and March 1987. According to Dr Amos Porat of the Meteorological Service, there was 250-250 milimeters of rainfall in the north of Israel, 1.5 to 2 times greater than the multi-year average for rainfall in January.

The Jerusalem Post reports that the Sea of Galilee rose 1.5 feet (50 cm) but is still more than 4 inches (11 cm) below the red line. February, however, is a critical month if the seven-year drought is to be ended.

“After the seven drought years we’ve had, the lack of water is so huge that we need much, much, much more to cover even part of that,” Schor said. “We are happy with January, but we can’t be satisfied from it.” It is not possible to determine whether this will also be considered a drought year until the end of the rainy season. However, two-thirds of winter has already elapsed, and 4.31 meters is still missing from the Kinneret’s basin, according to Schor. The average winter Kinneret rise is about 1.6 meters, and thus far, the 2011-2012 winter season has seen only a rise of centimeters. “It’s not a good situation,” Schor said.

The Post also provides rainfall statistics for various sites in the north.

Neither of the articles mentions the source of the rain.

Jeremiah 14:22 (NIV) “Do any of the worthless idols of the nations bring rain? Do the skies themselves send down showers? No, it is you, O Lord our God. Therefore our hope is in you, for you are the one who does all this.” 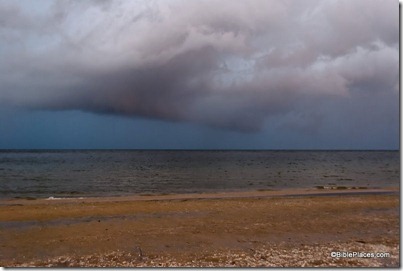 Storm clouds over the Sea of Galilee in January

One thought on “Record Rainfall in Galilee in January”