A recent study of seismological activity carried out in the Dead Sea region by geologist Jefferson Williams claims to have found evidence for an earthquake that can be dated to April 3, 33 CE. This study then goes on to make the claim that this earthquake relates to the crucifixion earthquake mentioned in Matt. 27:51. However, later in the article Williams concedes that the earthquake could have happened some time “before or after the crucifixion” at which point it was “borrowed” by the “author of the Gospel of Matthew.” Jennifer Viegas writes in Discovery News:

To analyze earthquake activity in the region, geologist Jefferson Williams of Supersonic Geophysical and colleagues Markus Schwab and Achim Brauer of the German Research Center for Geosciences studied three cores from the beach of the Ein Gedi Spa adjacent to the Dead Sea. Varves, which are annual layers of deposition in the sediments, reveal that at least two major earthquakes affected the core: a widespread earthquake in 31 B.C. and an early first century seismic event that happened sometime between 26 A.D. and 36 A.D.

In terms of the earthquake data alone, Williams and his team acknowledge that the seismic activity associated with the crucifixion could refer to “an earthquake that occurred sometime before or after the crucifixion and was in effect ‘borrowed’ by the author of the Gospel of Matthew, and a local earthquake between 26 and 36 A.D. that was sufficiently energetic to deform the sediments of Ein Gedi but not energetic enough to produce a still extant and extra-biblical historical record.” If the last possibility is true, this would mean that the report of an earthquake in the Gospel of Matthew is a type of allegory,” they write.Williams is studying yet another possible natural happening associated with the crucifixion – darkness. Three of the four canonical gospels report darkness from noon to 3 PM after the crucifixion. Such darkness could have been caused by a dust storm, he believes. Williams is investigating if there are dust storm deposits in the sediments coincident with the early first century Jerusalem region earthquake.

This last paragraph effectively shoots holes in the somewhat sensationalistic exactness of the claim.

What’s the point of arguing for the calendar week and day in which Jesus was crucified if you are going to say it could have happened any time in 33 CE? Moreover, the fact that he is looking for naturalistic ways of explaining the phenomena mentioned in Matt. 27 reeks of the formula used in “The Exodus Decoded.” So prepare yourself for a Discovery channel documentary in the near future.

That said – if the report is to be trusted – it is quite interesting that there is seismological activity in the period in question. In fact, this lines up quite well with the late Harold Hoehner’s chronology in Chronological Aspects of the Life of Christ (see pg. 95-114). However, given the caveat of the geological analysis proving to be accurate, this evidence still proves relatively nothing. I suspect scholars will line up along party lines with inerrantists claiming infallible evidence and the rest claiming allegorical etiological explanations (e.g. Arad, Ai/Et-Tell, Sodom and Gomorrah, etc.)

Update 6/1/2012
Geologist Jeff Williams has sent me an email clarifying his team’s findings and subsequent interpretations. I have reproduced his clarifications and personal input with his permission below.

Based on his response which expresses a strong desire to maintain objectivity, it is my feeling that this is not a case that should be lumped into the growing sensationalistic pseudo-archaeological, pseudo-scientific “discoveries” related  to Jesus. You can also check out some more of there research here.

An early first century earthquake shows up in the Dead Sea sediments for which the historical record (that we know of) shows no plausible candidates. However, there is mention of this earthquake in the New Testament. In fact, we added no new information about the date of the crucifixion. We took previous work by other authors largely based on astronomical calculations pertaining to the Jewish Lunar Calendar which assigned a range of likely dates for the crucifixion and compared them with our geologic estimate of the age of the earthquake; which was dated to have occurred between 26 and 36 AD. We also performed a geomechanical analysis to examine all historically reported earthquakes within a 40 year time span around 30 AD to see if it was likely that any of them would have deformed the sediments. None appeared to be likely candidates. Then we made some conclusions which are listed in the abstract of our article.

The abstract of our article is reproduced below :
This article examines a report in the 27th chapter of the Gospel of Matthew in the New Testament that an earthquake was felt in Jerusalem on the day of the crucifixion of Jesus of Nazareth. We have tabulated a varved chronology from a core from Ein Gedi on the western shore of the Dead Sea between deformed sediments due to a widespread earthquake in 31 BC and deformed sediments due to an early first-century earthquake. The early first-century seismic event has been tentatively assigned a date of 31 AD with an accuracy of ±5 years. Plausible candidates include the earthquake reported in the Gospel of Matthew, an earthquake that occurred sometime before or after the crucifixion and was in effect ‘borrowed’ by the author of the Gospel of Matthew, and a local earthquake between 26 and 36 AD that was sufficiently energetic to deform the sediments at Ein Gedi but not energetic enough to produce a still extant and extra-biblical historical record. If the last possibility is true, this would mean that the report of an earthquake in the Gospel of Matthew is a type of allegory.

Finally, I think I should explain who I am and what I am about.
I am first and foremost a scientist. I am also agnostic. I assume the New Testament is a human document that contains errors. I am not trying to prove or disprove the Bible. I am treating the statement by Matthew that there was an earthquake on the day of the crucifixion as a hypothesis that needs to be tested. I will publish whatever I can coax out of the sediments; whether this supports or contradicts biblical accounts. I have much respect for people of faith but I personally do not rely on faith. I am naturally curious and don’t know what the end result will be of the research I am undertaking.

Politics and the City of David

An article this week at The Christian Century doesn’t break any new ground on the political dimensions of the excavations in the City of David, but for those looking for an introduction to the subject, this is an easy place to begin.

The Israelis have continued to dig all around Jerusalem, while the Palestinians have tried to stop digs that they see as infringements on their sacred territory. In the 1990s, Muslims undertook their own dig on the southeast corner of the Temple Mount as part of providing new access to the Marwani Mosque (also known as Solomon’s Stables). The dig was criticized by Israelis for taking place without the proper archaeological supervision, and some Israeli archaeologists charged that the Muslim excavators hid evidence of ancient Jewish presence at the site.
Recently, attention has been focused on a site known as the City of David, which lies just south of Jerusalem’s Old City. Archaeologists are exploring a site on and around the stream of Gihon, a site associated with the origins of the city. Jerusalem, like so many cities, was founded on or near a water source.

The article has a few basic mistakes, and each side will disagree with parts of the presentation, but as an introduction to the subject, it serves its purpose. 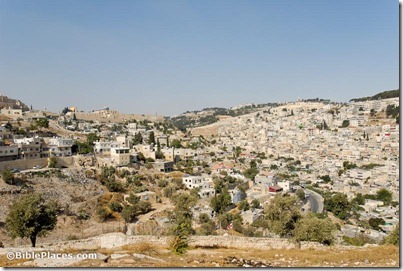 City of David (center) and Silwan (right) from south (source)
Share:
Leave a comment
Search
About the BiblePlaces Blog