As I’ve pointed out before in this series, pictures can be powerful tools in the hands of the Bible teacher.  The right picture can illuminate a passage and bring deeper understanding.  This week’s photo is another example.  It comes from Volume 7 of the revised and expanded edition of the Pictorial Library of Bible Lands, which focuses on Egypt.  The photo is entitled “Nile River Valley Near Beni Hasan Tombs from East” (photo ID #: tb010805121). 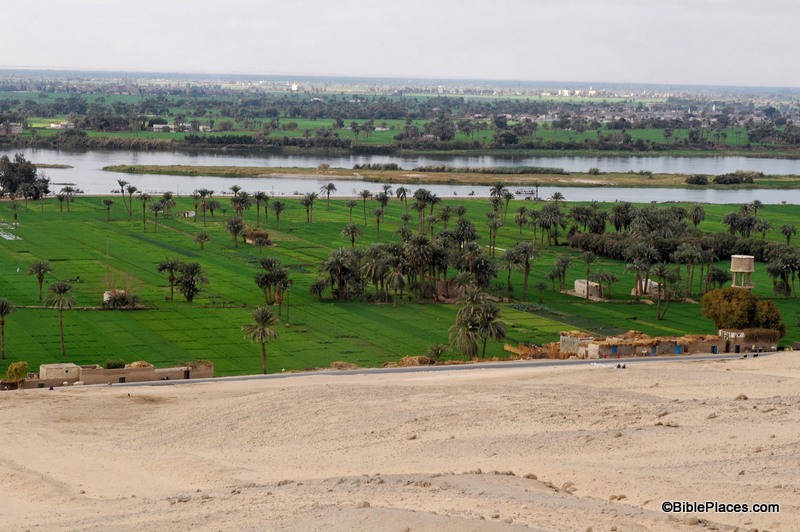 When the Israelites were about to enter the Promised Land, Moses contrasted the land of Egypt with the land of Canaan:

For the land, into which you are entering to possess it, is not like the land of Egypt from which you came, where you used to sow your seed and water it with your foot like a vegetable garden. But the land into which you are about to cross to possess it, a land of hills and valleys, drinks water from the rain of heaven, a land for which the Lord your God cares; the eyes of the Lord your God are always on it, from the beginning even to the end of the year. (Deut. 11:10-12, NASB)

In the context of the chapter, Moses is warning the people to obey God’s commandments so that they will prosper in the land.  He explains that life in the Promised Land will be very different than it was in Egypt, and this week’s photo helps explain why.

The agriculture of Egypt is based on the water from the Nile.  Farmers plant their crops in the flat land around the Nile, in part, because they have easy access to water from there.  The phrase in verse 10 “sow your seed and water it with your foot” has produced a number of interpretations, such as carrying the water by foot in buckets, digging channels with one’s feet, and using a mechanical device that is powered by foot.  Whatever the correct interpretation, the point is that in Egypt it was possible to provide water for your crops by mere manpower.  In this week’s photo, you can see the relationship between the farmland and the Nile, and it is clear from this picture that it would be a relatively easy task to get water from the Nile to the crops growing nearby.

By contrast, the agriculture of Canaan is vastly different.  There is no convenient and reliable natural source of water for the farmer’s crops.  In contrast to the flat farmlands that surround the Nile, Canaan is “a land of hills and valleys,” which makes moving water from one place to another difficult.  And the only major river that flows through the land, the Jordan, is below sea level for most of its course and is basically useless for irrigation.  Before the advent of modern machinery, the only way the fields could be watered was by rain.

So in Deuteronomy 11, Moses warns the people that they must obey God to thrive in the Promised Land.  If they obey, then God will send the rain and they will have food (Deut. 11:13-15).  If they don’t, then:

He will shut up the heavens so that there will be no rain and the ground will not yield its fruit; and you will perish quickly from the good land which the Lord is giving you. (Deut. 11:17, NASB)


The land to which God was leading His people was a land that required them to walk by faith and depend on Him.
This and other photos of the Nile Valley are included in Volume 7 of the Pictorial Library of Bible Lands and can be purchased here. More information and photos about the Nile River can be found on the BiblePlaces website here.  For more thoughts on how the Land of Israel was a land that fostered faith, see my post here.
Share: