Whenever you see a sensational claim such as the discovery of a specific item mentioned in the Bible, you should be suspicious. In most cases, the archaeologist seems to be driven more by a desire for attention than by the evidence (e.g., the Cave of John the Baptist, the palace of David, or anything announced by Yosef Garfinkel in the last six years).

This one is immediately different than others in that the archaeologist is Amihai Mazar, a scholar of impeccable reputation. On the other hand, it was first reported by CBN, a ministry under the leadership of Pat Robertson. (As of this writing, it is not reported in any other news outlets. A carefully prepared CBN video of the story is here.)

Mazar has suggested that a room found in his excavations at Tel Rehov was inhabited by Elisha on the basis of (1) two incense altars found nearby, (2) a table and a bench discovered in the room, and (3) a fragmentary inscription reconstructed to read Elisha. In addition, the location of Tel Rehov is situated along a route that Elisha traveled between his home in Abel Mehola and the woman’s house in Shunem (2 Kings 4:8ff). According to the article, Stephen Pfann “calls the evidence compelling.”

The article does not attempt to evaluate this sensational claim. While there are or will be critiques by scholars who dismiss the veracity of the biblical account, this analysis comes from one who believes in the accuracy of the Old and New Testaments.

Before accepting the suggestion that the home of Elisha has been discovered at Tel Rehov, you
should consider the following:

1. The inscription that mentions Elisha is incomplete and the reading is reconstructed. This article does not make it clear how many letters are missing, but some have been supplied by scholars. This conjecture may or may not be correct.

2. There is no reason to believe that there was only one person named Elisha in ninth century Israel.

Though only one is named in the Bible, others may well have existed.

3. Even if this inscription reads Elisha, there is no reason to believe that Elisha inhabited the building where it was found. Many other scenarios can be imagined apart from his residence here.

4. There was presumably more than one room in ninth-century Israel that had a table and a bench.

Though 2 Kings 4:10 says that Elisha’s room in Shunem had a table, bed, chair and lamp, this does not indicate that every room in Israel with a table and a bench belonged to Elisha.

5. The presence of incense altars is not particularly unique as they have been found in many locations. I would argue that the presence of such altars is evidence against Elisha’s presence, for surely he would have advised for their destruction because they violated God’s law (cf. 1 Kgs 3:3; 2
Kgs 12:3).

6. While the location of Tel Rehov seven miles (12 km) from Elisha’s hometown of Abel Meholah is interesting, it seems an unlikely place for Elisha to have a lodging place only a two-hour walk from home. 2 Kings 4 says that the Shunamite woman prepared a room for Elisha and this makes sense given its position midway between his destinations of Abel Meholah and Mount Carmel. It is not clear why Elisha would need another one, and there is no evidence in the Bible that he stayed at Tel Rehov.

It is not impossible that this discovery is everything that the article suggests, but adding improbability to improbability does not make the case stronger. The quotation near the end that this is “one more proof [of biblical accuracy] for what we call the doubting world” is an all-too-common example of failing to analyze the data when the proposal fits your beliefs. It happens on both sides, but it bothers me more when it happens on mine. 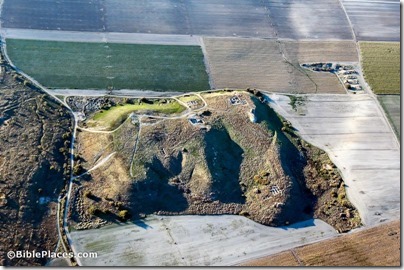 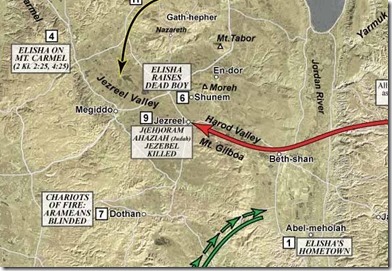 Area of Elisha’s ministry; Tel Rehov is near Beth-shan.
Map from the Satellite Bible Atlas
Share: