Claim: Palace of David Discovered in the Foothills of Judah

Professor Yosef Garfinkel has announced the discovery of two royal public buildings in his excavations at Khirbet Qeiyafa. According to the press release, one is the palace of David and the other was the king’s storehouse.

Two royal public buildings, the likes of which have not previously been found in the Kingdom of Judah of the tenth century BCE, were uncovered this past year by researchers of the Hebrew University and the Israel Antiquities Authority at Khirbet Qeiyafa – a fortified city in Judah dating to the time of King David and identified with the biblical city of Shaarayim.
One of the buildings is identified by the researchers, Professor Yossi Garfinkel of the Hebrew University and Saar Ganor of the Israel Antiquities Authority, as David’s palace, and the other structure served as an enormous royal storeroom.
Today (Thursday) the excavation, which was conducted over the past seven years, is drawing to a close. According to Professor Yossi Garfinkel and Sa’ar Ganor, “Khirbet Qeiyafa is the best example exposed to date of a fortified city from the time of King David. The southern part of a large palace that extended across an area of c. 1,000 sq m was revealed at the top of the city. The wall enclosing the palace is c. 30 m long and an impressive entrance is fixed it through which one descended to the southern gate of the city, opposite the Valley of Elah. Around the palace’s perimeter were rooms in which various installations were found – evidence of a metal industry, special pottery vessels and fragments of alabaster vessels that were imported from Egypt. The palace is located in the center of the site and controls all of the houses lower than it in the city. From here one has an excellent vantage looking out into the distance, from as far as the Mediterranean Sea in the west to the Hebron Mountains and Jerusalem in the east. This is an ideal location from which to send messages by means of fire signals. Unfortunately, much of this palace was destroyed c. 1,400 years later when a fortified farmhouse was built there in the Byzantine period”.
A pillared building c. 15 m long by 6 m wide was exposed in the north of the city, which was used as an administrative storeroom. According to the researchers, “It was in this building the kingdom stored taxes it received in the form of agricultural produce collected from the residents of the different villages in the Judean Shephelah. Hundreds of large store jars were found at the site whose handles were stamped with an official seal as was customary in the Kingdom of Judah for centuries”.
The palace and storerooms are evidence of state sponsored construction and an administrative organization during King David’s reign. “This is unequivocal evidence of a kingdom’s existence, which knew to establish administrative centers at strategic points”, the archaeologists say. “To date no palaces have been found that can clearly be ascribed to the early tenth century BCE as we can do now. Khirbet Qeiyafa was probably destroyed in one of the battles that were fought against the Philistines circa 980 BCE. The palace that is now being revealed and the fortified city that was uncovered in recent years are another tier in understanding the beginning of the Kingdom of Judah”.
The exposure of the biblical city at Khirbet Qeiyafa and the importance of the finds discovered there have led the Israel Antiquities Authority to act together with the Nature and Parks Authority and the planning agencies to cancel the intended construction of a new neighborhood nearby and to promote declaring the area around the site a national park. This plan stems from the belief that the site will quickly become a place that will attract large numbers of visitors who will be greatly interested in it, and from it one will be able to learn about the culture of the country at the time of King David.

To my conservative friends, I’d urge caution before making any bold claims based on Garfinkel’s work. Or any claims at all. Let’s wait and see how credible archaeologists evaluate his stratigraphy. If he’s correct, we’ve lost nothing by being patient.

For previous posts related to Khirbet Qeiyafa, see here. The high-resolution images below are available from this link.

UPDATE: The Jerusalem Post has some background on the previous years of excavation. The Arutz-7 headline dubs the find as “King David’s ‘Suburban Palace.’” The Times of Israel includes a review of Eilat Mazar’s alleged excavation of David’s palace in Jerusalem.

Haaretz largely ignores the press release and gives Garfinkel’s arguments for Qeiyafa’s significance in proving the existence of David’s kingdom along with counter-arguments. The subhead gets right to it: “Some archaeologists claim that three rows of stones found in Khirbet Qeiyafa prove the existence of a kingdom shared by two biblical kings – David and Solomon; other scholars beg to differ.”

UPDATE #2: Joseph Lauer has noted an essay by a David Willmer, a former supporter of Garfinkel, at Foundation Stone. He provides some important context, including this:

It’s no coincidence that on the last day of excavation an announcement so “momentous” should be made. It’s all about attention, fund raising, the lecture circuit, the headlines. But it’s not about archaeology. Nor is it about history. And it calls into question the right to call oneself an academic. When science, research and intellectual honesty are held hostage to sensationalism, then the public, the truth, and the legitimacy of showing the deep roots of the Jewish people in the Land of Israel are done terrible damage. The archaeologists become a laughing stock – and those wishing to delegitimise the State of Israel are given another arrow in their bid to destroy that connection. That the IAA would enable this unprofessional and egregious charade is nothing less than shameful. 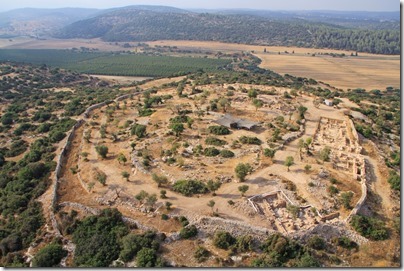 Aerial view of Khirbet Qeiyafa from the north 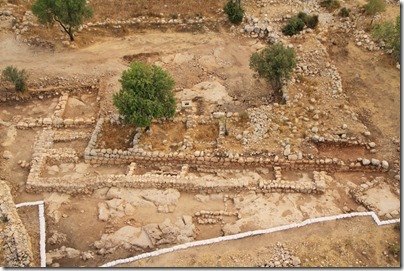 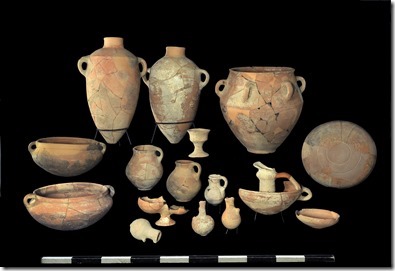 14 thoughts on “Claim: Palace of David Discovered in the Foothills of Judah”