Picture of the Week: Rock Badgers

Last week, our “Picture of the Week” was of camels: an animal that most people are familiar with, even though we don’t see them on a regular basis. This week, we will focus on an animal you may have never seen before but is highly praised in the Bible … the rock badger. 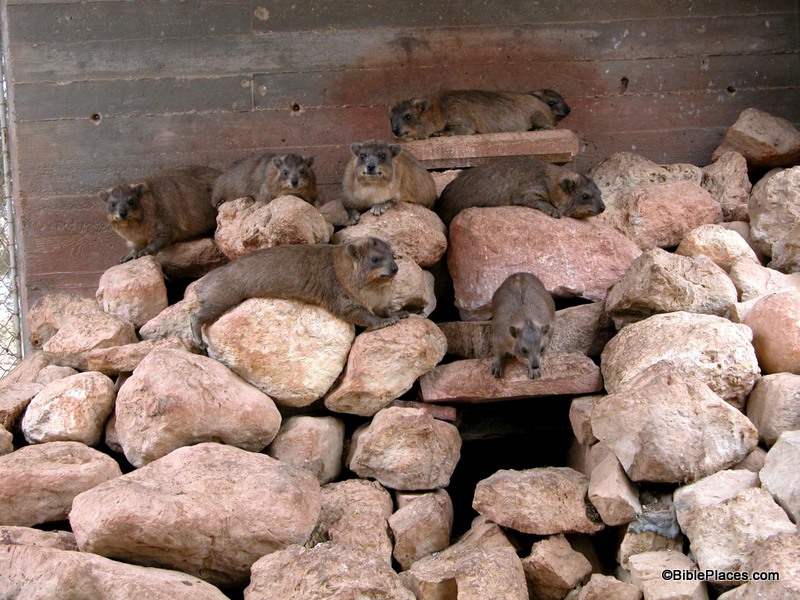 This type of animal is also called a “hyrax” or, as the KJV translates it, “coney.” In the Law of Moses, the rock badger is identified as an unclean animal which the Israelites were not allowed to eat (Lev. 11:5; Deut. 14:7). These animals are also mentioned in Psalm 104:18. While exulting the Lord for the amazing world that He created, the psalmist states, “The high mountains are for the wild goats; the rocks are a refuge for the rock badgers” (ESV).

However, the rock badger’s claim to fame is how it is described in Proverbs 30. In that passage, it is listed among “exceedingly wise” animals:

Four things on earth are small,
but they are exceedingly wise:
the ants are a people not strong,
yet they provide their food in the summer;
the rock badgers are a people not mighty,
yet they make their homes in the cliffs;
the locusts have no king,
yet all of them march in rank;
the lizard you can take in your hands,
yet it is in kings’ palaces.  (Prov. 30:24-28, ESV)

The PowerPoint annotations included in Volume 17 of the Pictorial Library of Bible Lands (where this picture can also be found) has the following description of the rock badger:

The Syrian coney, also known as the hyrax or rock badger (Hebrew shaphan) looks like an overgrown guinea pig. It can easily move about on rocks and difficult terrain because its feet have built-in suction. Its diet consists of plants and various grasses, but although it does have a three-part digestive tract, it does not ruminate. As is necessary for survival in the desert, the coney can maintain water well, but has difficulty with direct heat, and thus hides in the rocks.

Last week we talked about how a photograph can help a bible teacher or preacher transport their listeners back to the world of the Bible. Yet sometimes a photograph can do even more. Sometimes, things that were familiar to someone living in ancient Palestine are completely outside the experience of someone living in the 21st century, so you not only need to transport your listeners back to the world of the Bible … you need to paint a picture for them about what they would have seen there!

You need to educate them about things that existed in that world. That is what makes a collection like the Pictorial Library of Bible Lands so valuable. With just a picture or two, you can deepen someone’s understanding of the Bible forever.

This photograph was taken at the Hai-bar Nature Reserve in Israel, where many animals mentioned in the Bible are on display. This photo and over 1,000 others are available in Volume 17 of the Pictorial Library of Bible Lands, and can be purchased here for $34 (with free shipping). An additional photo of a rock badger can be found on the BiblePlaces website here, along with several other biblical animals.

3 thoughts on “Picture of the Week: Rock Badgers”