Picture of the Week: The Burnt House, Jerusalem

Our series on “Obscure Sites in the PLBL” hit a little snag this week as I turned to Volume 3 which focuses on Jerusalem. How do you pick an “obscure site” in a place as famous and as familiar as Jerusalem?  The solution is to go underground … 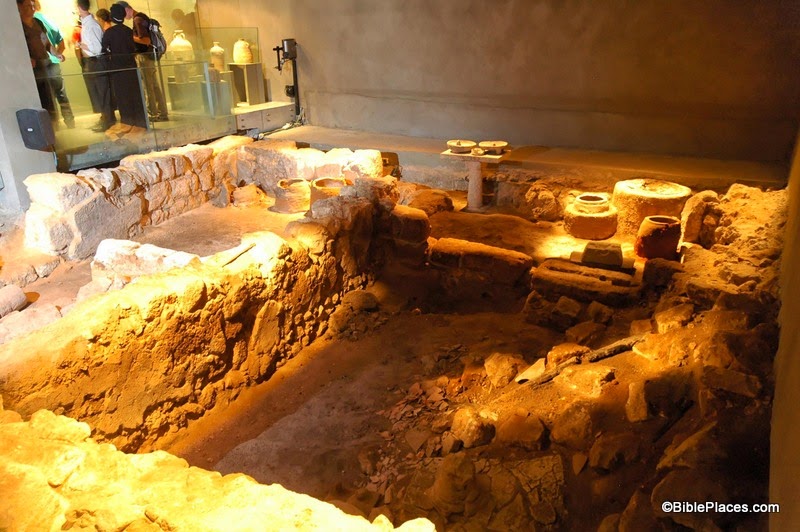 Our obscure site for this week is The Burnt House in the Jewish Quarter of the Old City of Jerusalem. This place is probably familiar to many readers of this blog, but I don’t think it makes it onto the itinerary of many tours to the Holy Land so it qualifies as “obscure.” This is a site that dates back to the destruction of Jerusalem by the Romans in the first century. In his book, The Holy Land, Jerome Murphy-O’Connor introduces the site in this way:

A month after the destruction of the Temple and the Lower City in early September AD 70, the Romans stormed into the Upper City: ‘when they went in numbers into the lanes of the city, with their swords drawn, they slew without mercy those whom they overtook, and set fire to the houses whither the Jews had fled, and burnt every soul in them’ ([Josephus,]  War 6: 403). This was one of those houses. The latest coin found among the charred debris on the floor was dated AD 69; an unused spear stood in one corner.

One thousand, nine hundred years later, archaeologists working under Nahman Avigad uncovered this house that (presumably) had been destroyed by the Romans. What you see in the picture above is the bottom level of the house. Leen Ritmeyer has posted his reconstruction of the entire house on his blog here, along with some newspaper clippings from the time of its discovery. While discussing this site, Avigad once wrote:

This house was destroyed by an intense fire and was filled with fallen stones, wooden beams (carbonized) and layers of ash. The plastered walls were completely covered with soot, and the debris concealed many artefacts. What is unique here is the fact that the debris had not been cleared away or disturbed by later construction: Everything remained just as it was when the building was destroyed.

Many of these artifacts can be seen in the museum which now sits under the buildings of the modern Jewish Quarter. The most chilling aspect of this discovery was the fact that the archaeologists found the skeletal remains of an arm of a young woman, lying on the threshold of the entrance. Presumably this was one of the victims who died at the hands of the Romans in AD 70.

This photo and over 1,500 others (including pictures of the artifacts on display in The Burnt House Museum) are available in Volume 3 of the Pictorial Library of Bible Lands, and can be purchased here for $39 (with free shipping). If you care to visit the site on your next trip, the Burnt House Museum is located at 2 Hakaraim Street, Jerusalem, near the top of the long staircase that leads down to the Western Wall Plaza.

The first excerpt was taken from Jerome Murphy-O’Connor, The Holy Land: An Oxford Archaeological Guide from Earliest Times to 1700, 4th ed. (Oxford: Oxford University Press, 1998), pp. 73-74.  The 5th edition can be purchased here.