Is This Really the Akra?

Has the Akra been discovered? On Monday the Israel Antiquities Authority (IAA) circulated a press invitation to “A Solution to One of the Greatest Questions in the History of Jerusalem.” The location of the Hasmonean fortress of the Akra has long eluded archaeologists, but recent work in the Givati parking lot in the Central Valley below Dung Gate has uncovered a massive structure from this period.

The identification of this structure as the Akra fortress appears to be based on three items:

Is this alone sufficient to identify this structure as the Akra? I think there’s an automatic suspicion because of the tendency of archaeologists to want to find something great, something that will get their name in the press, lead to invitations to speak, and bring in financial support. I think the burden of proof necessarily increases for any discovery that claims to solve a long-standing question. One might recall as well that it was in this very spot that this very same archaeologist claimed to have found the palace of Queen Helene of Adiabene. It’s not impossible that a palace was built on top of the remains of a fortress, but significant evidence is necessary to convince skeptics like me that the archaeologist isn’t simply tagging every big wall he finds with the most impressive label from the time period.

Is there another way to explain the arrowheads and ballista stones? It would seem that any fortification structure would be the target of attack. As far as the period goes, the Akra was standing in the 2nd century BC, but so were other fortifications. The Hasmoneans fought with the Seleucids for more than twenty years, but finding evidence of such warfare doesn’t mean that the excavated
structure must be the famous Akra.

There is yet another problem. Historical sources tell us that the Akra was built to protect the Temple Mount. The excavated building, however, is 120 meters south of Herod’s Temple Mount and down the slope at that. If they found the Akra, it is in the wrong place. Leen Ritmeyer explains this point in detail.

The archaeologists have found important remains that will fill in significant details in Jerusalem’s history. For that they are to be commended. But they must know that they will not be able to get away in making sensational claims that are not supported by the evidence.

You can read more about this discovery in the IAA press release as well as stories by the Times of Israel and the Jerusalem Post. Arutz-7 has a 2.5-minute interview with the archaeologist, Doron Ben-Ami. A scholarly published article in Hebrew is available at academia.edu. High-resolution photos and a video are temporarily available here. 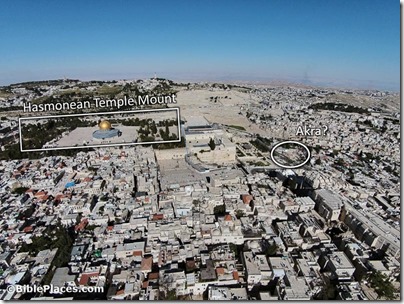 Location of excavation compared to the Temple Mount
Share:

7 thoughts on “Is This Really the Akra?”