New Book: A Political History of the Arameans

At the end of last week, after a lengthy delay, we were happy finally to get our grubby mitts on Lawson Younger’s newest book, A Political History of the Arameans: From Their Origins to the End of Their Polities (Atlanta: SBL, 2016). 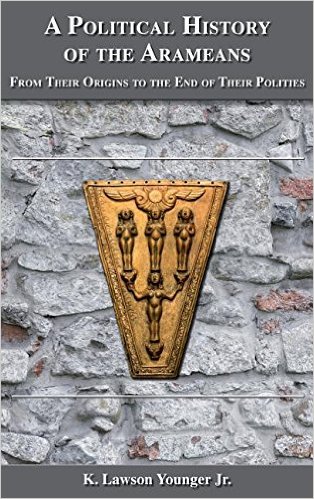 Lawson Younger is a professor at Trinity Evangelical Divinity School, and I have had the pleasure of taking several of his classes during my sojourn in Illinois. I am not sure when he began work on this volume. I do recall attending a seminar that he first offered in the fall of 2006 entitled “Arameans and the Bible.” Since then, Younger has published a handful of book chapters and articles dealing with the Arameans and he has given several lectures on the subject. Now, 10 years later, that initial course has morphed into a two-inch-thick book.

This is a technical work packed with data and analysis—it is not fluff reading. Bible students will find much of interest in its pages, for Younger treats all biblical references to Aram/Arameans, beginning with the Patriarchs through the divided monarchy. But he does much more than that, covering Aramean kingdoms and entities that receive no biblical mention but that are attested in the textual and/or archaeological record of the Near East. It is quite an impressive accomplishment. Due to the nature of the sources, a good portion of the book is told from the perspective of the Assyrians as they campaigned to the West. There are over 100 maps, illustrations, and tables sprinkled throughout the chapters (we are quite fond of the maps). You should find that this volume will satisfy all of your Aramean-history needs, and at 857 pages, it should satisfy them for some time.

From the back cover:

This volume presents a political history of the Arameans from their earliest origins at the end of the Bronze Age to the demise of their independent polities. Employing the most recent understanding of tribal political structures, aspects of mobile pastoralism, and models of migration, K. Lawson Younger Jr. takes a regional approach to explain the rise of the Aramean political institutions. He thoroughly explores the complex relationships and interactions of the Arameans with the Luwians, the Assyrians, and the Israelites. By drawing on all available sources—sociological, textual, and archaeological—Younger is able to develop a comprehensive picture of this complex and important people whose influence and presence spanned the Fertile Crescent during the Iron Age.

A Political History of the Arameans can be purchased in hardback ($118) or in paperback ($98). (Apparently, SBL has chosen to opt for European publishers’ pricing on this title which is too bad.) Below is the table of contents.

Side note: For a treatment of the Aramean oppression of Israel from the Israelite perspective, I recommend this work.