For thirty years now, Rami Arav has led excavations at the site of et-Tell. Since the beginning, he has identified the ruins with the New Testament site of Bethsaida. This identification was quickly adopted by Israeli road sign makers, and most popular literature today calls the site “Bethsaida.” Arav has argued strenuously that his site is Bethsaida, and the titles of all of the excavation reports begin with “Bethsaida.” The problem is that as excavations progressed, the site turned out to be primarily an Iron Age city, with little remains from the first century AD.

That has bothered a number of scholars for several decades now, and the site of el-Araj has been suggested as the true site of the fishing village where several of Jesus’s disciples lived. This past summer, Mordechai Aviam began excavations to determine if el-Araj is a more suitable candidate for Bethsaida.

A preliminary summary posted online gives a bit of the background as well as brief descriptions of the two excavation areas. Of the western area, Aviam writes:

Underneath the Crusader level we discovered remains of a dwelling dated to the late Byzantine-early Islamic period. An unusual large bronze jar was uncovered, which has been sent to the laboratory for conservation. Coins and pottery dating from the 6th-8th centuries were uncovered on the floors. The most surprising find was a group of gilded glass tesserae, which are used in the construction of wall mosaics. These type of tesserae are typical to large and important churches. Which means, even before finding the church itself, it is possible to suggest that in the Byzantine period, el-Araj was identified as a holy place, most likely Bethsaida. One of the walls contains a large, reused, monolithic, limestone pillar, and nearby, outside of the excavation area, there is another limestone double “heart-shaped” pillar, which are both typical to late Roman Jewish synagogues in Galilee.

Concerning the period of interest, he summarizes:

Both areas yielded a large number of typical early Roman pottery. As of yet, structures from the early Roman period have not been uncovered.

After this initial season of excavation, our primary conclusions are: 1) the site of el-Araj was most likely identified as Bethsaida during the Byzantine period, and a church, probably a pilgrim monastery was erected at the site. 2) The site of el-Araj was inhabited during the early Roman period; therefore, it remains a good candidate for the identification of Bethsaida. 3) We will continue to excavate el-Araj in the coming years.

I think he’s on solid ground on point #3. The other two points are clearly premature. While making these claims may help the team raise money and support, scholarship is not well served by making such bold assertions so early in the process. This in fact is what troubles many about Arav’s identification. He made the claim early on and now it’s not easy to admit failure. If Aviam’s site is indeed Bethsaida, he can take his time to collect the evidence that will make a compelling case.

A two-minute video (mostly in Hebrew) provides footage of excavations at both candidates for Bethsaida, with a cameo by Indiana. Nyack College has a couple of dozen photos on its Facebook page.

I’m told that donations would be appreciated for next year’s excavations. You should be able to do that through the Center for Holy Lands Studies. 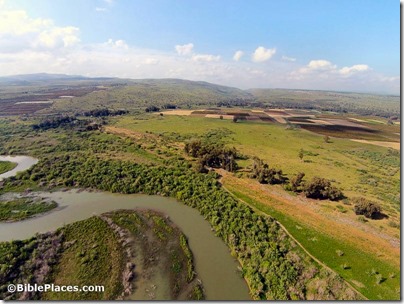 Aerial view of the vicinity of el-Araj, possible location of Bethsaida
Share: