Archaeologists have discovered a cave on the cliffs above Qumran that held Dead Sea Scrolls until it was looted in the mid-1900s. Eleven caves have previously been identified containing ancient scrolls, but no new ones have been discovered since Cave 11 was found in 1956.

From the Hebrew University press release:

Excavation of the cave revealed that at one time it contained Dead Sea scrolls. Numerous storage jars and lids from the Second Temple period were found hidden in niches along the walls of the cave and deep inside a long tunnel at its rear. The jars were all broken and their contents removed, and the discovery towards the end of the excavation of a pair of iron pickaxe heads from the 1950s (stored within the tunnel for later use) proves the cave was looted.
Until now, it was believed that only 11 caves had contained scrolls. With the discovery of this cave, scholars have now suggested that it would be numbered as Cave 12. Like Cave 8, in which scroll jars but no scrolls were found, this cave will receive the designation Q12 (the Q=Qumran standing in front of the number to indicate no scrolls were found).
“This exciting excavation is the closest we’ve come to discovering new Dead Sea scrolls in 60 years. Until now, it was accepted that Dead Sea scrolls were found only in 11 caves at Qumran, but now there is no doubt that this is the 12th cave,” said Dr. Oren Gutfeld, an archaeologist at the Hebrew University’s Institute of Archaeology and director of the excavation. “Although at the end of the day no scroll was found, and instead we ‘only’ found a piece of parchment rolled up in a jug that was being processed for writing, the findings indicate beyond any doubt that the cave contained scrolls that were stolen. The findings include the jars in which the scrolls and their covering were hidden, a leather strap for binding the scroll, a cloth that wrapped the scrolls, tendons and pieces of skin connecting fragments, and more.”
The finds from the excavation include not only the storage jars, which held the scrolls, but also fragments of scroll wrappings, a string that tied the scrolls, and a piece of worked leather that was a part of a scroll. The finding of pottery and of numerous flint blades, arrowheads, and a decorated stamp seal made of carnelian, a semi-precious stone, also revealed that this cave was used in the Chalcolithic and the Neolithic periods.

The press release includes the photos shown below, all courtesy of Casey L. Olson and Oren Gutfeld.

The story is covered by the Jerusalem Post, Haaretz, and The Times of Israel (briefly). 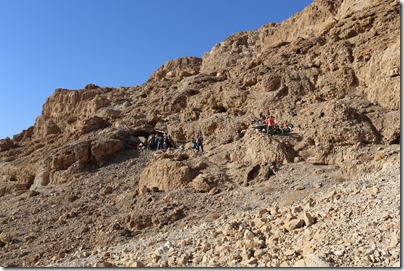 The entrance to Cave 12 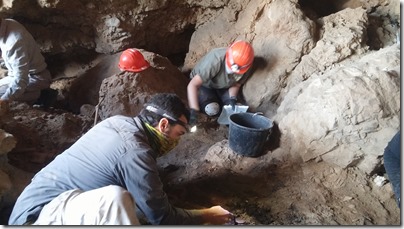 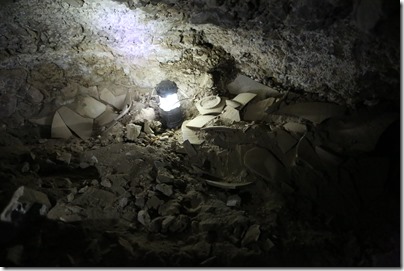 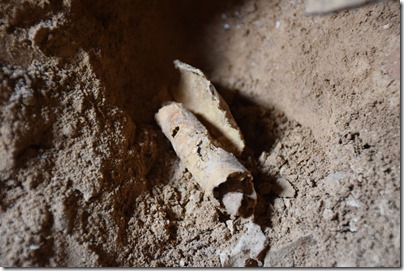 5 thoughts on “Cave 12 Discovered at Qumran”